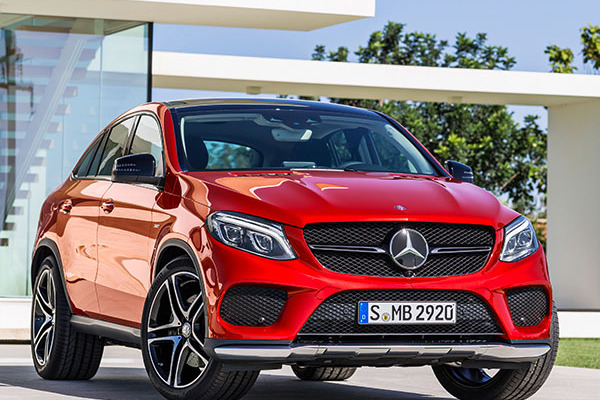 An new Mercedes-Benz GLE Coupe goes on sale late this summer. An automotive Frankenstein of sorts with the footprint of a midsize crossover and the sleek roofline of a coupe, the five-seat GLE Coupe goes head-to-head with the BMW X6, which pioneered the luxury coupe-SUV segment and was previously without any direct competitors.

The GLE is the newest model to use Mercedes-Benz’s new nomenclature, where the last letter of each SUV line corresponds with the sedan on which it’s based. As such, the GLE is based on the midsize E-Class platform.

At first glance, the GLE Coupe silhouette is very much like that of the BMW X6, from its sportier stance to its chunky rear-end. Though, front and rear ends are distinctly Mercedes-Benz, including the signature five-pointed star integrated in to the mesh grille opening. In back, slim bands across the tail lights echo the S-Class Coupe. Standard wheels are 21-inch light alloys; 22-inch light-alloy wheels with mixed-size tires are optional for a more sportscar-like appearance and ride.

Executives say future GLE models will come in both gasoline and diesel variants. But for now, the GLE Coupe will go on sale in the U.S. in a single trim level: The Mercedes-Benz GLE 450 AMG 4Matic Coupe.

It’s powered by a 3.0-liter biturbo V6 that cranks out 362 horsepower and 384 pound-feet of torque. That blows away BMW’s V6-powered xDrive 35i, which makes only 300 hp and 300 lb-ft. of torque. The GLE Coupe comes standard with an all-new 9-speed automatic transmission and Mercedes-Benz’s 4Matic all-wheel drive.

The GLE Coupe will not only challenge the BMW X6 on the road, but also on the factory floor. It will be built in the U.S. at Mercedes-Benz’s manufacturing plant in Tuscaloosa, Alabama. BMW manufactures all of its X6s at Spartanburg, South Carolina.

Like other Mercedes-Benz models, the GLE 450 AMG 4Matic Coupe features adjustable driving modes, including Comfort, Sport and Sport Plus, as well as a Slippery mode for rainy, snowy or other low-traction conditions. Individual mode lets drivers create their own customized mode by adjusting each driving variable separately (steering, suspension, etc).

The GLE Coupe also gets a new suspension, used for the first time on a Mercedes-Benz vehicle, which pairs its Airmatic air suspension with continuously variable dampers, with level control and an automatic lowering function at higher speeds, all of which improve stability and handling.

Inside, the GLE 450 AMG Coupe’s cockpit feels more like a sportscar compared with a standard SUV, though it offers the higher seating position and improved visibility. Sport seats and a leather-wrapped sport steering wheel come standard, with brushed aluminum interior trim (AMG carbon-fiber trim is optional). An 8-inch TFT display is perched at the top of the center stack, and is controlled via MB’s Comand knob with touchpad on the center console. A rear seat entertainment system is optional, as well as an upgraded, Bang & Olufsen sound system.

The 2016 Mercedes-Benz GLE 450 AMG 4Matic Coupe is scheduled to go on sale in the U.S. in late summer 2015. It was revealed at the North American International Auto Show at Detroit. Prices haven’t been announced, we’re guessing it will start slightly higher than BMW’s lower-powered base X6, at around $65,000.