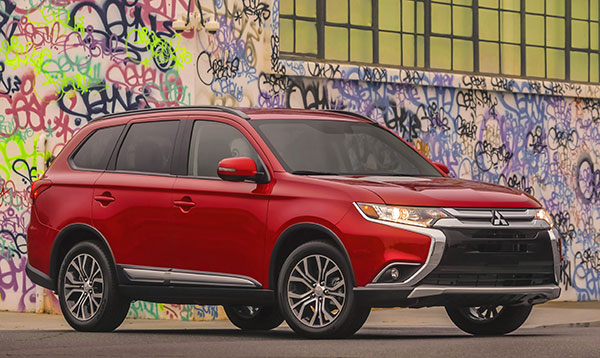 The Mitsubishi Outlander is a seven-passenger SUV designed with restraint to be practical for families, not intended to be bold. It’s revamped for 2016 with exterior changes to make it look more distinctive, including a new nose, alloy wheels, and LEDs uses for the tail lights.

The 2016 Mitsubishi Outlander cabin features 31 improvements, including more sound insulation, better door sealing, and upgraded door glass and windshield, making the it one of the quietest cars in its crossover class. Mechanically there’s a new continuously variable transmission (CVT) and refinements to the suspension to improve the handling and ride.

The Outlander is an easy-driving crossover that’s quiet, comfortable, and well-mannered, although it’s also soft and detached from the road.

The Mitsubishi Outlander is about the same size as the Toyota RAV4, Honda CR-V, and Subaru Forester. Inside, however, it seems roomier. Its standard third-row seat is very low and only big enough for kids, much like the optional third rows on the Nissan Rogue and Kia Sorento.

The base engine is a 2.4-liter four-cylinder that makes 166 horsepower and gets an EPA-estimated 27 mpg combined, with a responsive new CVT that enables it to accelerate from 0 to 60 mph about one significant second quicker.

The Outlander GT model uses 3.0-liter V6 that makes 224 horsepower and comes standard with all-wheel drive, and it sounds nice, but it offers only mediocre performance on premium fuel and gets just 23 mpg combined. It can tow 3500 pounds, while the Outlander ES and Outlander SE models are rated for just 1500.

The Outlander gets top ratings in every category of the Insurance Institute for Highway Safety’s (IIHS) tests, earning the coveted Top Safety Pick+ status. In government tests it gets five stars for side impacts and four stars for frontal impacts. Available active safety features include lane-departure and forward-collision warnings and adaptive cruise control.

The new front end of the 2016 Mitsubishi Outlander has flair, with styling the company calls its Dynamic Shield, derived from the good-looking Montero SUV. The hood has been made smoother by eliminating the center crease, and there is more chrome, reminiscent of fangs, to make it look more assertive around the new bumper. The Outlander’s new design is not entirely sporty, but it does pop like never before. In profile it might even be compared to the beautiful new Volvo XC90. Although not in detail, as all the chrome and shiny plastic looks a little cheap.

The interior feels spare and understated, not particularly eye-catching or harmonious, but warm and accommodating. It’s highly functional, with a simple and refreshingly straightforward instrument panel that doesn’t have a lot of buttons.

For 2016, the furry old headliner has been replaced by a smoother and more modern material. The upholstery fabric is improved, instrument cluster gets contrast stitching, leather-trimmed steering wheel gets accents, and center console gets padding, and plastic faux wood has been eliminated. The Mitsubishi cabin is now equal in quality to the competition.

Every Outlander has three rows of seating, and the first two rows are supremely comfortable. The front seats are supportive for taller folks and offer a great driving position. The second row isn’t flat and hard, and although it doesn’t slide forward like other three-row cars, it easily folds flat for a large cargo area, with a small storage compartment in the floor, good for hiding a laptop or purse.

The third row is nearly five inches wider than before, with 2.4 inches more legroom, but it’s still too low to be useful by adults.

The four-cylinder engine that comes standard in the Mitsubishi Outlander does not deliver much motivation for a 3,500-pound vehicle, but at least the new transmission makes it quicker than before, because that CVT is considerably more responsive. It’s the latest unit, called the CVT8, with a lower ratio for a better launch from a standing start as well as reduced rpm on the freeway. It’s at ease on flat roads at lower speeds, but it’s indecisive on uphill grades, and we’d say it’s barely adequate for this seven-passenger vehicle.

The 3.0-liter V6 that comes in the GT is disappointing for a couple of reasons. Its torque only comes on at higher revs, and not only is it thirsty at 23 mpg, it needs Premium gasoline. At least its 6-speed automatic transmission with paddle shifters spices up the drive.

The suspension is typical for a crossover, with MacPherson struts in front and a new multi-link rear geometry. To improve the ride and handling, Mitsubishi reinforced the front suspension crossmember, changed the front and rear spring rates, retuned the front shocks, and replaced the rear shocks with larger ones. Mitsubishi says the suspension is sportier, but we’d say it’s still far from sporty. However it’s less harsh than before, and will better satisfy shoppers in this class.

The electric power steering is precise and firm, making the turn-in confidence-inspiring.

Mitsubishi has many years of experience with all-wheel drive, including professional rally racing. The latest system is called S-AWC, and features an electronically controlled center coupling and open rear differential. It uses a separate active front differential to get the optimum torque split in every situation, including when just one wheel is on ice. We were able to test the Outlander off the highway and found the suspension and AWD are quite capable on unpaved trails.

Despite its flaws, if you need a seven-seat affordable family crossover SUV, the Outlander SE is the best bang for the buck.