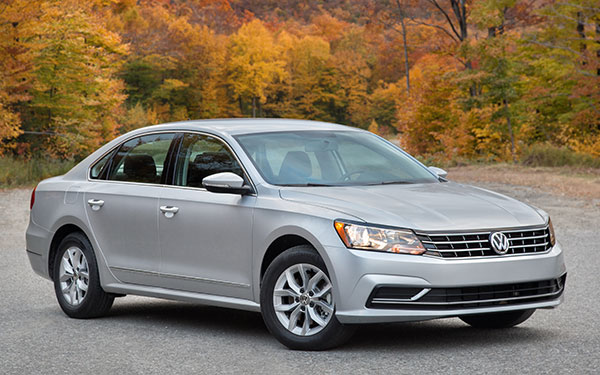 The 2016 Volkswagen Passat is freshened with styling and technology updates that help to make it one of the more appealing sedans in its class.

Passat is a nameplate that goes back to the early 1970s, when Volkswagen moved to expand its product range beyond the beloved Beetle. Over the course of eight generations Passats have appeared in sedan and wagon body styles, generally falling into the midsize category. Never spectacular, always solidly Teutonic in character, Passats have weathered times when quality problems plagued Volkswagens in general.

Introduced for 2012 and freshened for 2016, this Passat differs from previous generations in that it’s unique to the U.S. market: bigger than the European version, assembled at a U.S. plant (Chattanooga, Tennessee), and attuned to what VW product planners perceive to be American tastes in terms of vehicle dynamics. What that means is suspension components a bit softer than Passats sold elsewhere in the world.

The 2016 Passat updates make it more eye-catching, its infotainment systems have been enhanced, and safety updates strengthen its ratings with the National Highway Traffic Safety Administration and Insurance Institute for Highway Safety. But its strong suits continue to be those that made it a leading player in the midsize sedan derby when it made its debut four years ago: exceptionally solid structure, excellent build quality, autobahn genetics, and full-size sedan roominess.

There are two engine options: a turbocharged 1.8-liter four-cylinder (170 horsepower, 184 pound-feet of torque), and VW’s unique narrow angle V6 (VR6, in Volkswagen-speak) with 280 hp, 258 lb-ft of torque. Both engines send power to the front wheels via 6-speed automatic transmissions. The four-cylinder is paired with a conventional torque converter automatic, while the VR6 is paired with Volkswagen’s excellent dual-clutch design, featuring paddle shifters for manual operation.

At this writing, VW still had not come up with a fix for its 2.0-liter turbodiesel engine, the center of an emissions-cheating scandal affecting some half-million cars in the U.S. Thus the Passat TDI option is off the table until further notice.

Passat 1.8T S is exceptionally well appointed for a base model.

With the exception of the sleek CC sedan and the Beetle revival, Volkswagen has rarely been noted for adventurous designs, and the Passat is consistent with that tradition.

That said, there is much that’s new on the 2016 model. VW has redesigned all the surfaces from the windshield forward: the new four-bar grille is more assertive, the new hood is slightly domed, there’s more bright trim, and the lighting array now includes the option of LED headlights, fog lights, and taillights. Bumpers are also new, front and rear, as is the trunklid, and the redesigned array of wheels includes 16-, 18-, and 19-inch sizes.

This is still a conservative design. But it does have a more upscale presence than the 2015 car.

Also, the conservatism is mitigated by the new R-Line trim, a sporty option in other VW models and a first for the Passat. As noted in the model lineup notes, R-Line cosmetics include revised bumpers, rocker panel extensions, a rear diffuser, black accents, and 19-inch alloy wheels wearing 235/40 tires with a high-speed (186 mph) ZR rating.

VW’s synthetic V-Tex leatherette upholstery has a very upscale feel, similar to the M-B Tex developed by Mercedes, indistinguishable from leather, and at least as durable. The front seats convey a sense of relaxed sportiness, with good lateral support but not too snug. Seat heating is available, front and rear, and as noted the rear compartment is as roomy as many full-size sedans.

That goes for the trunk, too: almost 16 cubic feet.

It’s true that this made-for-and-in-America Passat is a little softer than its European counterpart, something that’s provoked a bit of disdain by some of the hotshoes at enthusiast magazines.

It’s true that feline responses are an advantage in emergency situations, but not every car has to be a track star; this is a family sedan, after all. Ride quality is supple, and there’s a little more body roll than you’d get in a BMW 3 Series, for example. On the other hand, there’s autobahn development in this car’s heritage, and it’s readily apparent, with the kind of stability required for running at 120 mph.

Of course, you’re not likely to be doing 120 on your daily commute, or carting the kids to school. But stability is as welcome at 60 mph as it is at autobahn speeds. Moreover, while the suspension is tuned toward the comfort side of the ledger, the Passat’s responses in quick maneuvers are prompt, braking performance is stronger than most cars in this class, and interior noise is low at all speeds.

Power from the 1.8-liter turbo is respectable, sufficient for the cut and thrust of daily commuting as well as passing on two-lane highways. If you have a need for speed, the VR6 trims 0-to-60 mph times, albeit at a pretty hefty price.

About the only dynamic element that could use a little work is the electric steering, which is vague and over-assisted below about 50 mph. But that’s a criticism that applies to many contemporary sedans, a trait that drivers adapt to with familiarity.

In the main, the Passat is satisfying to drive, inspiring confidence as the miles accumulate and providing comfort in any run, short or long.

In terms of style, quality, comfort, dynamics, and value, the 2016 Passat stacks up with the best in a class that’s loaded with very good cars. It’s a pleasure to drive, it’s exceptionally roomy, it has top safety ratings, and there’s that hint of Teutonic genetics in its sinews. Think of it as the automotive equivalent of a terrific German recipe, baked in an American kitchen.

With driving impressions by The Car Connection.