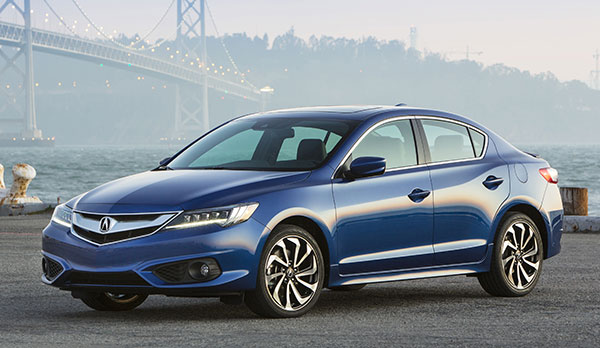 The Acura ILX is a luxury front-wheel-drive compact with simple choices compared to some of its rivals: one engine, one transmission, and three trim levels.

Edgy and sporty, it uses a sharp 2.4-liter four-cylinder engine and paddle-shifting twin-clutch 8-speed automatic transmission. It makes 201 horsepower and 180 pound-feet of torque. The ILX cabin is a sweet spot to spend time, with contoured surfaces and instruments that are easy to read.

The Acura ILX competes most directly with the Audi A3 and Mercedes CLA.

For 2016, it got a light update, with LED headlamps, better interior materials, and more available connectivity including a dual-screen infotainment system. The 2017 Acura ILX is unchanged.

The NHTSA gives it five stars for crash safety, and the IIHS gives it top scores including in the small overlap frontal impact test, which very few cars ace. Acura’s available advanced safety systems were rated Superior, to give it a Top Safety Pick+ rating.

The 2017 ILX is rated by the EPA at 25/35 miles per gallon City/Highway, or 29 mpg Combined. Premium fuel is recommended, so that raises the fuel cost. That’s 2 mpg more than the A3 and 1 mpg less than the CLA.

The ILX is fairly handsome. It might not turn heads, but it won’t turn stomachs, either. It’s got some sharp edges, down low at the bottom of the front fascia, and the rockers along the side below the doors. Its front bumper is V-shaped, following the V of the grille, and looks like a pointed chin. The flat black plastic surrounding the round foglamps is dull and awkward. The 18-inch 10-spoke wheels are unique, kind of like 10 legs with big feet on them, and look like they should be moving (not like they are moving) when they are standing still. They look better moving, because then they’re a blur and you can’t see how ugly they are.

The instrument panel isn’t as sporty as the rest of the car; it’s very basic, with a spare look to the plastic and vents, and a straightforward interface. We’d like a bit more glamour, and wish there were more color and originality in the materials, although they are of good quality, and the fit and finish is very good. Things are laid out neatly and comfortably, ergonomically, intuitively. It’s easy to operate the controls without taking your eyes off the road. Except for the infotainment system, and that’s a sore point.

The refinement and quietness is good, with fairly thick glass and standard active noise cancellation system that absorbs small but annoying sounds from the powertrain or road. It uses the sound system’s speakers, a cabin microphone, and a sophisticated processing algorithm.

The front seats are supportive and very adjustable for the driver, although the front passenger seat needs height adjustment. Lower, that is, as headroom is tight, while still being a bit more than rivals. In back, surprisingly there’s enough leg room and knee room for six-footers.

The overall interior space is impressive, with plenty of room for small personal items. Unlike in the frustrating Audi A3, there are well-planned bins and cubbies everywhere. The 12.4-cubic-foot trunk can hold two large suitcases, or a large cooler, or even a wheelchair. The split rear seatbacks can be flipped forward for access to the trunk with extended space.

The direct-injection 2.4-liter engine, making 201 horsepower, delivers strong and satisfying performance. It’s the same engine as in the next biggest Acura model, the TLX.

The superbly responsive 8-speed, dual-clutch transmission is the perfect companion. It uses a torque converter for low-speed smoothness, while it shifts very quickly with the paddles, when driving the ILX aggressively, including rev-matched downshifts in sport mode.

The A-Spec performance package uses 18-inch wheels that are 7.5 inches wide, with very low-profile tires that make the ride harsher on bumpy roads. We got a lot of seat time in a 2016 A-Spec, and don’t believe the harder cornering allowed by these wheels and tires is worth the compromise in comfort.

The Acura ILX isn’t for everyone, although it can be enjoyed. The styling isn’t distinctive, the engine isn’t special, the cabin is mundane; best thing about it is the 8-speed dual-clutch transmission.

Sam Moses contributed to this report, with driving impressions by The Car Connection.