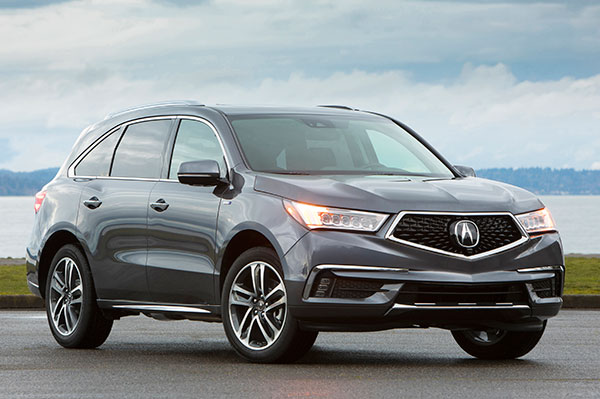 The Acura MDX, one of the best-driving crossovers in its class, is improved for 2017, with a prettier face, better ride and handling, and more standard active safety features. These changes come on top of the 2016 upgrades, led by a paddleshifting nine-speed automatic transmission.

Also new is the 2017 Acura MDX Sport Hybrid with SH-AWD (super-handling all-wheel drive). It uses a 3.0-liter V6 and seven-speed dual-clutch transmission, mated to a three-motor hybrid system: one motor at the transmission and two for the rear wheels. It makes a combined 325 horsepower, and Acura says it will get a combined 25 miles per gallon.

The standard MDX comes with a 3.5-liter direct-injection V6 making 290 horsepower with front-wheel drive or all-wheel drive. With awd, it’s EPA-rated at 18/26/21 mpg, on Premium fuel. With the optional Stop/Start features, which comes in a package, it gets 1 mpg more, though that feature can be annoying.

SH-AWD is an exceptional system that moves power front-to-back and side-to-side. The MDX also uses what Acura calls IDS, for Integrated Dynamics System, with Comfort, Normal, Sport and Sport Plus modes. With SH-AWD, the system puts more power to the outside wheels in a curve. That’s called torque vectoring.

The MDX earns the Insurance Institute for Highway Safety Top Safety Pick Plus rating, as well as five stars overall from the National Highway Traffic Safety Administration, including five stars in front and side crash test, four stars in rollover. For 2017, the MDX gets the AcuraWatch suite of safety and driver-assist systems as standard equipment. That includes forward collision warning, automatic emergency braking, lane-departure warning, road departure mitigation, and an adaptive cruise-control system with low-speed follow. A multi-view rear camera is also standard, while blind-spot monitors, surround-view cameras, and front and rear parking sensors are optional.

The MDX is rated to tow up to 3500 pounds, with a 350-pound tongue weight. That’s light to medium weight, borderline for a boat, depends on the size of the boat.

MDX SH-AWD ($45,950) adds Super Handling All Wheel Drive. (Prices are MSRP and do not include destination charge.)

The facelift on the 2017 MDX improves its looks. The diamond pentagon grille comes from the Precision concept car that got a positive reaction at the 2016 Detroit Auto Show. There are also freshly sculpted front fenders, a new hood, and jewel-like headlamps, with available LED foglamps. But Acura can keep the chrome rocker panels and additional body trim.

The profile seems less upright than some SUV rivals, with its chiseled front end, tapered roofline, and the smooth rear end. Ironically, while the smaller Acura RDX crossover looks larger than it is, the Acura MDX looks smaller than it is.

The sloping and tiered dashboard sort of mimics the grille, leading into a V-shaped centerstack. It’s neither opulent nor glitzy, but its design works better than its function. Well, we say it’s not glitzy, but its chrome surround sometimes reflects sunlight into the driver’s eyes.

However, the center console itself gets kudos for function: deep bin, tray for cellphone, another larger tray with sliding woodgrain top, traction strips for things so they don’t slide around, conveniently located cupholders, and another small bin for keys, with power outlet.

The push-button transmission shifter is brilliant. Besides freeing up space on the console, it’s easy to use with its distinct buttons.

The front seats are plush and supportive, with low side bolsters that make sliding in and out easy. The driver’s seat slides back automatically when the door is opened.

The MDX is roomy for its class. The second row slides six inches fore and aft, giving either second- or third-row passengers more legroom (but not both). It’s split 60/40 and folds almost flat, although there are a lot of gaps and holes, not good for dogs. A small illuminated button at each side of the second row moves the seat to enable reaching the third row. An easier way is going for the optional captain’s chairs.

Getting to the third row is difficult, so leave it for the kids. And, back there, the high floor level puts your knees at your chin, if you’re an adult or tall kid.

The third row folds perfectly flat by pulling a lever; the headrests flip forward, and can stay with the seats rather than having to be removed, a good safety feature because they won’t be missing when needed.

With both seats folded, the cargo space reveals an underfloor storage area with room for a laptop, camera bag, or more shoes. It has a lid that can be moved out of the way.

The cabin is very quiet and vibration-free, thanks to an active noise-cancellation system, an active engine mount system, acoustic glass in the windshield and windows, and heaps of insulation elsewhere.

The direct-injection V6 uses Honda’s i-VTEC variable valvetrain with two-stage Variable Cylinder Management that stops the fuel to three cylinders when the car is cruising. This engine was developed from Acura’s successful endurance racing engine, a 60-degree aluminum V6, single overhead cam with 24 valves. It makes 290 horsepower at 6200 rpm and 267 pound-feet of torque at 4500 rpm. It’s a smooth, refined engine, with acceleration whenever you need it, and it stays smooth to redline 6700 rpm.

However the nine-speed automatic transmission that was new for 2016 doesn’t provide the seamless shifts of the previous transmission. Most of the time it’s smooth enough, but it sometimes gets confused by all those gears, and hesitates; it’s like there are just too many choices for the computer program. One nice feature is that it automatically shifts into Park when you turn off the engine.

There’s a selector on the center console that switches the shift mapping between Drive and Sport. In Drive mode, the transmission does all the shifting automatically. Pressing the D/S switch changes it to Sport mode. Using the paddle shifters behind the steering wheel when in Sport mode generates quick throttle-blip downshifts or upshifts. The Sport mode works like a true manual mode because the transmission will actually let you hold onto gears all the way to redline, or all the way down to where you’re starting to lug the engine.

The Sport setting quickens steering response, while the Comfort setting brings a lighter steering feel. The steering doesn’t send a lot of feedback to the driver, but the MDX feels capable and coordinated when driven near the limit. Actually, its handling is admirable for a vehicle this size; it’s as close to nimble and responsive as you can get in a seven-seat vehicle. It’s a very easy car to drive.

Special shock absorbers smooth the ride over rough pavement, so there’s no price to pay for the good handling.

But it’s really all about the Super-Handling All-Wheel Drive system, we think. It not only provides excellent all-weather traction, it makes a difference on dry roads. It’s almost amazing that it’s been in Acura vehicles for more than a decade, still one of the few mechanical torque vectoring systems on the market.

The system can vary front-wheel torque distribution from 90 percent down to 30 percent (that’s 70 percent to the rear), or up to 100 percent to either the left or right wheels. That greatly improves stability when driving in winter, especially when patches of snow and ice are mixed with patches of wet pavement, or when the left wheels are on ice and the right wheels are on dry pavement.

The Acura MDX is pricey but has all the right stuff, starting with the sophisticated V6 and excellent all-wheel-drive handling. But not everything is right. The hesitating and sometimes snatchy nine-speed automatic transmission appears to be too ambitious.