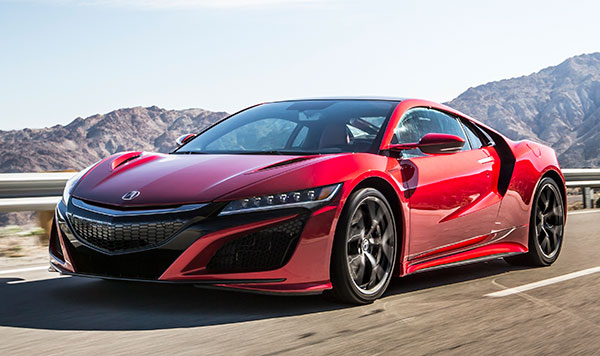 We talk a lot about generations here, but this time it’s different: It’s been a generation since there’s been a new Acura NSX like this. A generation in people years.

Mechanically, it shows it. The original NSX was pure, while this one is wild: wildly synthetic in how it feels, but no less a masterful blending of modern mechanical parts, including electrical motors and batteries along with turbos, servos, clutches and gears.

It’s one of the most complex cars ever made, a supercar with scorching performance that can drive like a grocery-getter. Acura says it can accelerate from zero to sixty in three seconds flat, and hit a top speed of 191 miles per hour.

The 2017 Acura NSX can compete on engineering levels with other off-the-chart supercars like the McLaren P1 and Porsche 918 Spyder, but its real-world rivals are more down-to-earth cars like the Ferrari 408GTB, Audi R8, Porsche 911 Turbo, or BMW i8.

The body structure is from aluminum and composite panels, with an optional carbon fiber roof. It was designed like a racecar, around aerodynamics, downforce and cooling, and has a front/rear weight ratio of 42/58 percent. It’s 176 inches long, with a wheelbase of 103.5 inches, or less than a Honda Civic. It’s way lower, at 47.8 inches, a bit wider, at 87.3 inches, and relatively heavy, at 3803 pounds, despite its lightweight structure, on account of all the mechanical and technological complexity and equipment.

The 2017 NSX is an all-wheel-drive hybrid, using a twin-turbocharged 75-degree 3.5-liter V6 making 500 horsepower, and a 9-speed dual-clutch transmission. The engine is direct injection and port injection; the turbos provide 15.2 psi of boost, using electric wastegate control. A 47-horsepower electric motor can add power to the engine or be a generator to charge the lithium-ion battery. There’s another twin motor located in the front center between the seats, feeding 36 horsepower to the front wheels, varying the power between them; Acura calls it Super Handling-All Wheel Drive, and it helps turn-in. This power drive unit can bring the total horsepower to 573, and can drive the car on its own at a low speed.

The V6 is mounted longitudinally in the car’s aluminum spaceframe (the original mid-engined NSX was mounted transversely), over the rear axle. The battery is mounted vertically behind the driver.

The engine uses a dry sump oil system that prevents oil starvation from centrifugal force in the corners during hard driving on the track.

The Integrated Dynamics System offers four modes: Quiet, Sport, Sport+ and Track. The driver can set the quickness of the steering, brakes (mechanical and regenerative), stability control, shock absorbers, engine, transmission, and SH-AWD. Quiet mode goes for fuel mileage and allows electric driving at slow speeds while restricting revs to 4000 rpm. It rates 21 miles per gallon, city or highway, by the EPA.

The NSX is hand-built at Honda’s factory in Ohio, and only 800 are planned to be built for 2017. It hasn’t been crash tested.

The new NSX is a sharp, clean wedge with an unfortunate extreme and cartoonish grille that destroys any classic supercar style. Acura designers need to go to Ferrari school and learn from the Italians what style is all about. But maybe the grille is appropriate because it serves to announce that this car is nothing if not a huge, successful compromise. It shouts out of a very big mouth, “I’m the hottest and flashiest Acura ever made!”

The massive mesh air intakes at the corners are fine, powerfully functional, and the framed wing-like LED lights are thin and lovely, but the big mouth in the middle steals your attention and makes you want to turn away, like scary clown lips.

From the side and three-quarter rear, when you don’t have to look at the grille, it looks fabulous. Especially from the rear, because it has gorgeous clean hips, broad and chiseled fenders that begin the wedge forward. And the side has sharp aerodynamic edges, with cool ducts all over the place.

Air flows over the low roof and down the backlight, guided into the engine bay and to the clutch cooler, through cooling ducts on the rear fenders; the air comes out through large ducts at the rear. There’s a conservative spoiler that, along with a diffuser and telegraphic taillight slots, generates downforce.

There was a lot of emphasis put on ergonomics in the cabin, so much that Acura came up with a design name for it: human-centric. One example of this human-centrism is that the head of a six foot-six inch driver can fit under the roof, and his or her legs can fit under the steering wheel and onto the pedals.

That said, human-centric might only apply to humans willing to come up with extra cash in order to be centric in Acura’s eyes. The standard four-way manual seat, with a fixed bottom cushion, isn’t as humanly centric as the optional power leather-and-suede seat with lumbar adjustment.

One shocking contradiction is the Honda Pilot-like transmission pushbuttons. There’s no lever for the right hand. At least there are paddle shifters, in addition to the pushbuttons that you might not be able to bear to use because they remind you that your $160,000 or $180,000 car borrows parts from a Honda SUV.

Another example of Acura’s human-centricism might be the basic arrangement of controls on the center console, what Acura calls Simple Sports Interface. However the 8.0-inch digital display isn’t exactly centered around the human, or even pointed toward him or her; the virtual gauges hang on an odd plane, tilted away from the driver. The screen has a big tach that shows in different colors, based on the driving mode.

The flat-topped and flat-bottomed steering wheel contains controls that function a second screen, for the audio and available navigation. Around that screen there are swaths of metallic trim that also outline the dashboard and the rest of the controls. So is a carbon-fiber trim kit that looks just like similar treatments in other luxury and performance cars. That is to say, relentlessly showy and somewhat inexpensive.

Metallic trim notwithstanding, the cabin is plush, with a lot of leather and Alcantara. Lightly treated leather is available.

With the width of the NSX, there’s good room for occupants, but not so much for luggage or cargo. The trunk is tiny, at 4.4 cubic feet. And while the forward visibility is excellent, with thin windshield pillars and a low dash, the rearward visibility is wretched, with thick rear pillars and the low seating position. The standard multi-angle rearview camera, and parking sensors, are all the driver has to back up. Look at it this way: you never have to turn your head.

The sounds inside the cabin are sweet, including sweet quiet, if that’s what you like, in Quiet mode. There’s also a tube carrying the exhaust into the cabin, if that’s what you like. The irony is that the natural exhaust, heard from the outside, is ordinary, un-supercar-like. It’s enhanced in the cabin. So you’re kind of fooled into thinking your car sounds cool, when it’s really boring to others.

Acura says that their engineers spent years working on algorithms that simulate the truest driving signals, to develop the car that synthesizes those signals. We have to scratch our heads to figure that one out. We know, after driving the NSX on the track, that the seat-of-the-pants experience is real enough. But it was created, copied from paper and computer readouts, it didn’t come naturally? Is there anything wrong with that? Is it the future?

The handling is progressive, which is how the car can be both a tame grocery-getter and scorching supercar. It can be driven in traffic at 30 mph without being difficult, and it can be driven quickly without feeling loose, pushy, or twitchy. It’s seamless between the two places. On the track it likes to driven rhythmically, early turn-in and throttle lift, stable under braking while turning.

In Quiet mode, the NSX runs on electric power as much as it can, under 4000 rpm. Sport, the default mode, quickens throttle and shift response, raises the revs, and begins the piping of engine sounds into the cabin.

In Sport+, the display around the tach changes from blue and grey to yellow and red, and the car offers up the full 474 foot-pounds of torque, more sound into the cabin, and heavier steering.

In Track mode, the sound pipes open wide, the air conditioning and audio system goes blank, and launch control is enabled. Track mode maintains the battery 60 percent of full charge, to keep the performance the same from lap to lap. The transmission holds the lower gears in corners, and only upshifts on the straights. It’s programmed so well that it’s hard to be quicker by using the paddles. We accept it, but we’re not sure we like it. It reduces the driver to a point-and-steer robot. Well, the driver is still allowed to gas and brake, but with stability control and anti-lock brakes, the car prevents him or her from going too far. Maybe a better word would be that it protects the driver.

The big Brembo brakes impressively combine mechanical and electric power, regenerated from the motors and regulated by the mode. And electric servo combines the motor braking with friction braking to provide predictable and steady braking. Sensors translate the speed and pressure of the driver’s foot to the resistance of the pedal, and it’s nearly perfect.

The all-wheel-drive system covers for unsmooth or over-aggressive driving, trading off some pinpoint precision. A misjudged turn-in point can induce some understeer, but the stability systems quickly catch. If your rhythm is correct, the car will respond with precision. Lift, brake, steer smoothly, and the front motors cleanly blend torque to the outside wheel.

Coming out of a turn at speed, you roll on the throttle, unwind the steering wheel, and the NSX will race away from the apex feeling totally neutral. The front motors provide torque or limit spin, while the limited-slip rear differential keeps the rears planted. You can choose how sticky you want to get, with the tires; like in Formula 1, you have hard, medium, and soft, with Continental, Pirelli, or Michelin.

The NSX leaves us with ambivalence. In the end, we think we prefer our supercar to be more of a beast. Sure, it’s brilliantly fast, brakes perfectly, and handles impeccably. But the over-exposed styling (ugly grille), impure high-tech instrumentation, and soulless exhaust note are all dealbreakers. And that’s pretending that we have $160,000 to spend on a grocery-getter with no storage space.