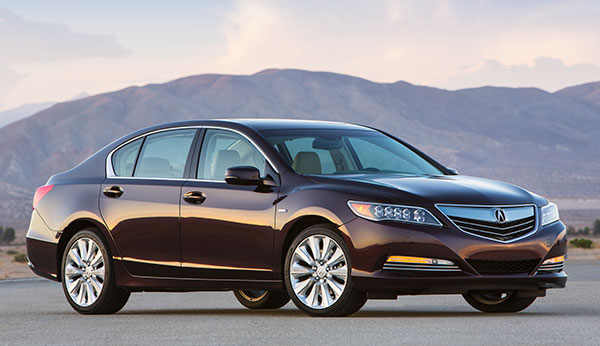 The Acura RLX midsize luxury sedan offers excellent engineering in an invisible car. Built on a high-tech chassis, the RLX Sport Hybrid offers the latest in sports hybrid powerplants. But it looks like a Honda Accord.

A good daily commuter car, RLX is smooth, quiet, comfortable. It glides along until quick response is needed, which it provides. Get in and enjoy the music.

RLX offers a choice of two drivetrains, each with its own character. Standard is a 310-hp 3.5-liter V6 engine driving the front wheels through a six-speed automatic transmission. It’s more powerful than the turbocharged four-cylinder engines in the rear-wheel-drive Mercedes-Benz E300 and front-wheel-drive Volvo S90 T5.

More powerful is the RLX Sport Hybrid, which uses a V6 and three electric motors to generate 377 horsepower with 377 pound-feet of torque. It uses a seven-speed dual-clutch automatic manual transmission. The front wheels are driven by the 3.5-liter V6 and a 35-kilowatt motor. Two more 27-kilowatt motors send all their power through a smart rear differential to the rear wheels, making the Sport Hybrid among the more advanced all-wheel-drive cars anywhere.

The front-wheel-drive RLX gets an EPA-rated 20 miles per gallon City, 30 Highway and 23 Combined mpg, on Premium gasoline. The RLX Sport Hybrid gets 29/30/29 mpg.

Its safety test results are impressive. In NHTSA testing it scored five stars in every test. The IIHS gave the RLX top Good ratings in all five of its crash categories, including the difficult new small overlap front test, although just a Marginal score for its headlights, which keeps it at Top Safety Pick instead of Top Safety Pick+.

The RLX is unchanged for 2017. The previous base model with leatherette upholstery has been dropped.

It’s easy to find acceptability in the styling, but it’s hard to find creativity. The front end was freshened in 2016, resulting in a clean fascia. Its roofline copies the BMW slope without showing it. We don’t have a problem with the looks of the Honda Accord, but to say the RLX looks like the Accord is no compliment. It costs twice as much. It neither offends nor thrills.

If you like the cabin of the Accord, you’ll like the RLX, assuming you don’t expect twice as much style. It’s functional, outfitted well, and nicely detailed, and has refinement down pat; but it’s also muddy, uninteresting, and lacking in passion and enthusiasm. The cabin of every other midsize luxury sedan we can think of makes the driver feel more special than the cabin in the RLX. It’s not like an Audi, precise, modern, almost sterile, nor like a Volvo S90 with its elegant whimsy.

Well, there is some whimsy and creativity. When you open the door, the RLX emits a little musical jingle and shimmers its dual screens, an emotional display that comes across like a small act of rebellion from a spirited designer.

The rear seat has thick cushions, but doesn’t offer much room for passengers who are tall or long-legged; the good headroom in front goes away in the rear, thanks to that BMW-like roofline. However, large door openings make it easy to climb in and out.

Storage for small things is decent, and the trunk in the RLX is acceptable at 14.9 cubic feet (14.7 with Advance), but the RLX Sport Hybrid’s 11.6-cubic-foot trunk is dinky. Those two electric motors that add performance take away function.

The roof pillars are thin, the rear glass decent-sized, and the beltline low, so there’s good rearward visibility. The standard rearview camera shows a 180-degree view, while a 360-degree version is optional.

The available adaptive cruise control can be useful, but it’s poorly calibrated. Even at the closest setting, there’s too much space between the RLX and the car ahead, which means it drives you crazy with its over-reacting. When a car pulls into your lane, even though there might be a no-worries margin, the system slams on the brakes to the chagrin of the person behind you.

The acceleration of the 3.5-liter V6 is steady, quiet and composed, with a pleasant small snarl when you try to kick some urgency into it. It could use a bit more urgency when pulling away from a stop with its light 272 pound-feet of torque. Upshifts with the six-speed automatic are smooth, and downshifts a bit more aggressive.

Rear-wheel steering adds stability on the freeway, especially during quick maneuvers. Acura calls it Precision All-Wheel Steer (P-AWS). It only turns the rear wheels a couple of degrees, but that makes a big difference; you might not feel it, but the car responds considerably more sharply and securely.

The suspension was re-tuned for comfort for 2016, so the 2017 RLX corners casually. Don’t expect the FWD RLX to be a sports sedan. The variable steering has a light touch at slow speeds, appreciated in parking lots, where P-AWS helps turn tighter. The steering resistance increases at speed, rising to the need. All of this, however, works out to a solid commuter for mindless slogging through traffic on a daily basis.

If it’s more of a sports sedan you want, the Sport Hybrid with SH-AWD is a contender; 377 horsepower with 377 pound-feet of torque is V8 territory. It’s more fun to drive, with quicker response and a sharper turn-in. You can feel the power in the seat of your pants, as you should; but not in the steering wheel, where you shouldn’t. The seven-speed dual-clutch automatic transmission works through a smart rear differential to erase any jerkiness in the shifts. The rear-wheel power transition is smooth and secure in winter slippery conditions. It’s extremely responsive to stabs of the throttle, and it accelerates almost like an electric car, uninterrupted thrust. It makes turbocharging seem obsolete.

The Acura RLX is a smooth luxury sedan with front-wheel drive, while the RLX Sport Hybrid offers advanced technology. The styling is uninteresting, however, and the cabin does not feel luxurious.