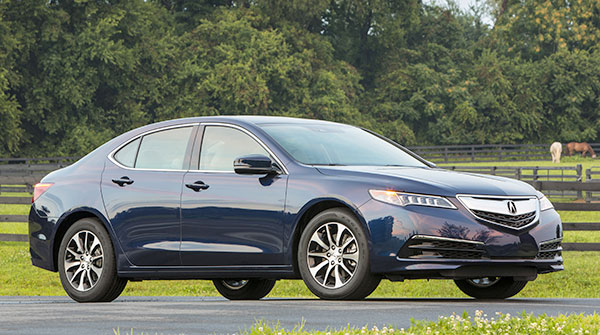 The Acura TLX was launched as a 2015 model, a near-luxury sedan that slots between the ILX and RLX. The TLX is high on technology and moderate on starting price. Nothing has changed for the 2017 Acura TLX from the 2016 model except for three new body-color choices.

Compact in overall dimensions, the Acura TLX ranks closer to a midsize sedan in terms of passenger space. Despite falling short of true luxury status, it competes against several premium German-brand sedans of comparable size, including the BMW 3 Series and Mercedes-Benz C-Class, as well as the latter’s smaller CLA.

At 106.5 cubic feet, total passenger space doesn’t quite match the 3 Series or C-Class, making the TLX a better choice for four occupants than five.

Two engines are available. In base trim, a 2.4-liter four-cylinder that produces 206 horsepower gives the TLX a nimble, nicely balanced character. Performance doesn’t get much of a boost with the more expensive 3.5-liter V6, which develops 290 horsepower and 267 pound-feet of torque. Furthermore, while the 8-speed dual-clutch automatic transmission in the four-cylinder model behaves admirably, the V6 sedan switches to a less impressive 9-speed unit.

Not everyone has high praise for the appearance of the TLX. Many consider it to be average, at best. Rather than fall in line with the latest design directions emanating from Honda’s luxury division, the TLX sticks with styling themes that are closer to the past.

Crash-testing by the National Highway Traffic Safety Administration brought a five-star overall rating. In one of the tests performed by the Insurance Institute for Highway Safety, for small-overlap frontal impact, the TLX ranked only Marginal. Other IIHS tests yielded Good scores (the highest rating). When fitted with optional safety features, the TLX was rated Superior for frontal-crash prevention.

Even the base model is impressively equipped. LED daytime running lights and a rearview camera are standard. Every TLX has a moonroof, power seats, keyless start, and Bluetooth connectivity. Only a single trim level is offered, but Technology and Advance packages add luxury amenities, as well as a group of active-safety features.

The 2017 Acura TLX offers a choice of powertrains and option packages:

Not distinctive in appearance, the TLX falls behind the related Honda Accord, which displays a significantly more upscale demeanor. Despite an arched silhouette that seems close to coupe-like, the TLX looks nondescript from the side.

In addition, the front end hasn’t yet lost all remnants of Acura’s old shield-style, beak-like grille. Running lights sit low in the front bumper, above air intakes that manage to add a sense of depth. Narrow LED headlights flank the grille.

Flared back fenders and a lip-style trunk spoiler suggest sportiness. The center portion of the body appears long, and does in fact enclose a roomy cabin.

Efficiency highlights the TLX interior. Materials convey a premium feel, even if it’s plain and ordinary. Though the cabin generally trails other sedans in the TLX class, it’s comparatively large for a car with a compact footprint.

Seats are comfortable enough, but not especially noteworthy. The driver faces an attractive, easy-to-read instrument group. Twin display screens are mounted on the center stack. On the passenger side, the view sinks to bleak. That rider sees an awkward expanse of empty black dashboard.

Plainness extends into the rear of the cabin. Back-seat passengers have slightly less legroom than those in major European competitors. On the plus side, a blissfully quiet ride helps make up for that modest loss of space. Interior storage is good, including door bins, a big central console, and sizable glovebox.

With either engine, the TLX rides and handles better than average. Yet, the difference between the two is quite dramatic.

We found the four-cylinder model with front-wheel drive has crisper, sharper responses. Not only is the engine eager to rev, but the brilliantly refined 8-speed dual-clutch automatic transmission is a gem. Its torque converter eliminates jerky shifts, so it feels like a conventional automatic.

The 3.5-liter V6 is bogged down by its transmission, a regular 9-speed automatic. Indecisive and hesitant, its shifts are sluggish and jerky. Downshifts, in particular, are lackluster. When shifting from Reverse to Drive, you can wait an agonizingly long time for anything to happen.

Wind and road sounds barely exist. You can expect a serene experience, which allows passengers to converse without shouting.

Acura’s near-luxury sedan competes against a flock of compelling cars from European manufacturers, but costs less than most rivals. Road behavior excels with the four-cylinder engine, but few sedans deliver such a quiet, calmly composed ride. Watch for the option packages, which can add quite a bit to the TLX price.