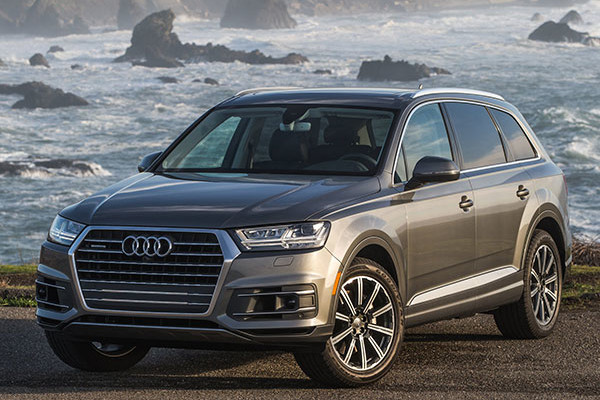 The all-new 2017 Audi Q7 marks the second generation of this full-sized all-wheel-drive crossover, a derivative of the trendsetting Volvo XC90 for its tall sportwagon design.

With its sophisticated suspension, lighter weight, and lowered center of gravity, the 2017 Q7 is exceptional for being a nimble seven-seater. It’s shorter by 1.5 inches and narrower by 0.6 inches, yet there’s more room in the cabin. A breathtaking 500 pounds was cut from the previous Q7 by using ultra-high-strength steel in the chassis, and aluminum for the front fenders, doors, hood, and liftgate.

The Q7 is one of the quietest and smoothest utility vehicles we’ve ever driven, with a remarkable ride quality. The engine is built in Hungary, the transmission in Germany, and the car assembled in Slovakia. It’s evident they know something about how to do it all tight.

The engine is mated to an 8-speed automatic transmission with Tiptronic manual control. There’s a driving dynamics system that now works with the optional adaptive air suspension for up to seven drive programs, including allroad.

Audi’s quattro drives the wheels at 60/40 rear/front under normal conditions, but can move to 30/70 rear/front or 85/15 rear/front if needed for traction.

The EPA rates the Q7 at 19/25 miles per gallon City/Highway, or 21 mpg Combined. In more than 600 miles of driving, we averaged 19.9 mpg, at mostly high speeds out in the wide open prairies of eastern Oregon and Washington. The Q7 is superbly smooth at speed. It has some active safety features that at times seem a bit too active.

The IIHS gives the Q7 its highest rating, Top Safety Pick Plus, partly for all its safety features including the ability for it to practically steer itself.

Available features include stop-and-go adaptive cruise-control (meaning you can drive with no feet), head-up display, and 1920-watt, 23-speaker Bang & Olufsen audio system. Options include tablets with 10.1-inch screens in the rear, giving passengers access to media, navigation, and some vehicle functions. Also a tow package, enabling towing up to 7700 pounds.

Standard and available safety features include blind-spot monitoring, rear-end collision mitigation, and night vision. Also Turn Assist, to scan oncoming traffic and interfere with your turning left if it thinks you’re cutting it too close; and Vehicle Exit Assist, which keeps you from opening the door when a car or bicycle is approaching from behind. Other assists include traffic jam assist, cross-traffic assist, lane-change assist, parking assist, and lane-keeping assist.

Compared to the previous Q7, this one is chiseled, sleeker, lower, more modern, with a prominent beltline and canted roof. Thicker crossbars in the big hexagonal grille, with arrow-like LED daytime running lights.

The cabin is called a Virtual Cockpit by Audi, and it feels a bit like one, with its controls at the driver’s fingertips and a detailed center console. The dashboard is wide and the controls are low. A high-rez screen atop the dash pops up when the car is turned on. The Multi-Media Interface (MMI) touchpad and controller use haptic feedback, which may be problematic for some to use. The Virtual Cockpit display and MMI infotainment system use powerful T30 NVIDIA graphics processors.

It’s sumptuous inside, warm and curvaceous, with ample headroom, thanks in part to a lower floor enabled by a new rear suspension, and thinner padding in the seats. It’s super quiet inside, thanks to generous application of acoustic insulation. The materials are mostly leather and metal or plastic that looks like metal. The overall build is tight and rattle-free.

There’s excellent legroom in the second row, with reclining seatbacks; it also folds flat. The third row is only big enough for children, but it raises and lowers with the touch of a power button in back, making a vast cargo area. With both rows raised, there’s still 14.8 cubic feet in back, as much as a sedan’s trunk.

Q7’s supercharged V6 engine accelerates with authority: quick, smooth and silent. You can’t feel the transmission shift up through its eight speeds. It’s possible to find yourself going 90 mph before you know it, and when you look down you can’t believe it. Ninety feels like seventy. It’s that smooth.

There are five modes to Audi Drive Select, including Comfort and Dynamic, which sharpens the throttle, transmission, steering, and suspension. There’s also Individual, to set those four things yourself; and Auto, which sets them at an optimum for overall performance, with sensors determining what’s optimum based on road conditions and the level of aggressiveness of your driving.

The suspension is new, multi-link at all four corners. Available are adaptive air suspension and four-wheel steering is available, which can turn the rear wheels up to five degrees, making turns tighter at slow speeds (great for head-in parking) and quicker at high speeds (great for emergency swerves). The adaptive air suspension can raise the chassis by 2.4 inches to give 9.3 inches of ground clearance, or lower it, while a sophisticated adaptive suspension can access up to 9.3 inches of ground clearance for offroad, or lower it by 1.2 inches for better freeway aerodynamics or better balance for canyon carving. 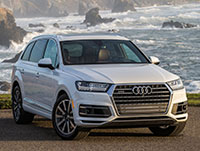 And the Q7 is one big SUV that you can actually enjoy in the twisty two-lanes. No tippiness.

However, we found the Active Lane Assist invasive, especially on two-lane highways. In its most aggressive settings, it constantly tugs at the steering wheel, to keep you perfectly dead-center in your lane. When unaware that it’s on, it can feel like something is wrong with the car, and it can be beyond annoying. You can turn it off with a tiny button at the end of the turn-signal stalk, but the default mode is On, so you must turn it off every time you start the car.

The Audi Q7 is a silky smooth and powerful SUV with a brilliant powertrain and handling. We found some of the active safety features invasive, however.

New Car Test Drive correspondent Sam Moses filed this report after his test drive of the Audi Q7 in the Pacific Northwest.