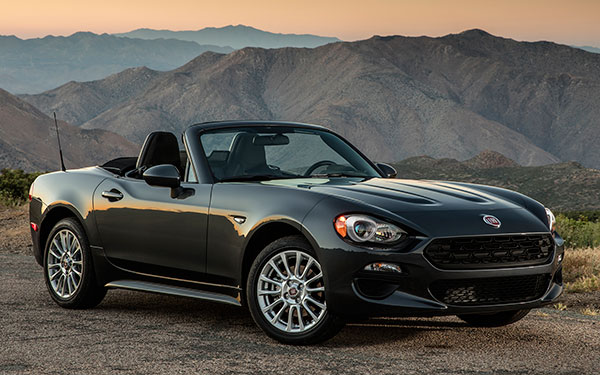 The proportions are classic and so is the name, which conjures up memories of the sweet little roadster that graced Fiat showrooms from 1966 to 1982, and later reappeared as the Pininfarina Spider from 1983 to 1985.

Although the 2017 Fiat 124 owes as much to Japan as it does to Italy, it’s true to the spirit of the original, a two-seater with equal measures of style and sports car purity. Make that affordable sports car purity.

The Japanese part of the story comes from Mazda, the engineering source for the Fiat 124’s chassis, which is shared with the MX-5 Miata. The cooperative engineering makes all kinds of financial sense for Fiat, which was saved the expense of developing its own sports car architecture from scratch.

From the point of view of the finished product, this is a very good thing. The Miata has been exemplary in terms of structure through its first three generations, and the latest chassis is not only far more rigid, it’s also substantially lighter. Underway, the handling is beautifully balanced. Thus Fiat engineers were able to skip directly to suspension tuning.

The shared engineering has led some to adopt an invidious nickname for the new roadster—Fiata—but this is too glib by half. Although the platform, convertible top, and some interior elements are shared with the Miata, the sheetmetal is all Fiat, and the turbocharged 1.4-liter engine comes from the Fiat Chrysler Automobiles (FCA) inventory.

Mazda Miata and Fiat 124 Spider share the same 90.9-inch wheelbase, but the Fiat is 5.5 inches longer overall than the Mazda, and fractionally wider. That shows at the scales, adding about 100 pounds to the Fiat version. A little of the added weight can be attributed to sound deadening and the Fiat’s turbocharged engine, but most of it can be written down to style.

The Miata’s skin fits like Spandex, while the Fiat’s exhibits character lines on the side panels, a higher decklid (sheltering a slightly bigger trunk), a longer hood, with a hexagonal upper grille reminiscent of the original 124.

It adds up to a striking Italianate design, with no exterior resemblance to the Miata. Add competitive dynamics and surprisingly attractive pricing and you have a very tempting sports car proposition.

As the pricing suggests, the Classico is the base model, the Lusso (automatic only) is more lavishly equipped including handsome leather seats, and the Abarth that includes Bilstein shock absorbers, limited-slip differential, sport mode that alters the engine controls for added punch, and other performance enhancements. There will also be several Mopar chassis enhancements available in the fall, as well as a high performance exhaust and turbo bypass air valve. (Prices are MSRP and do not include destination charge ($995).

Mazda’s convertible top, easy to operate with one hand, easily secured with a single windshield header latch, transfers to the Italian job almost unchanged, which is good, since it is beyond reproach in terms of operational simplicity. However, fabric of the Fiat top is more substantial, for additional sound insulation. Also, the 124 does not adopt the Miata’s new hard top option, at least not yet. 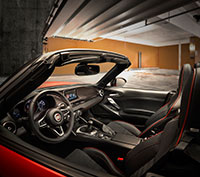 And of course there is the availability of navigation and connectivity, with readouts on the little screen jutting from the top of the center dash, a la Miata. The Miata’s twin rollover hoops, set behind the seats, also persist.

Although the 124 is longer than the Miata, that extra dimension doesn’t affect the cockpit. It’s snug, particularly on the passenger side, exactly like the Miata. FCA development engineers claim abundant room for occupants of generous vertical dimensions, but we suspect folks exceeding six feet could find themselves challenged, particularly with the top up.

On the other hand, with the top up, the 124 seems to be quieter than the Miata. Fiat’s noise suppression efforts pay off quite well.

What do you expect of sports car? Level cornering? Feline reflexes? Eager responses? Quick steering with laser accuracy? The car as an extension of the driver’s will?

The 124 checks all the boxes, and scores a few bonus points. For example, with the top down the cockpit is fairly free of turbulence up to 80-plus miles per hour. Baseball hats stay on. Conversation is possible, albeit at voice levels well above living room decibels. With the top up, the interior is surprisingly quiet; wind noise doesn’t become a real issue until speeds advance beyond legal limits.

And for all its athleticism, the 124 is reasonably supple in the ride department, at least in Classico and Lusso versions. The Abarth version was available only for an autocross, set up in a stadium parking lot, where it performed impressively but provided no real sense of what it would be like to live with day to day.

The Lusso version, our main ride during our Southern California preview, was pleasant enough, although the 6-speed automatic transmission leaves something to be desired for this sports car application. Shifting is smooth, but leisurely, and the manual function, achieved by moving the shift lever fore and aft, yields similar unhurried responses.

The 6-speed manual, which is from the Miata inventory, is far more satisfying, with crisp engagements and a sweet clutch.

Thrust from the 1.4-liter turbo, 160 horsepower (164 in the Abarth version), 184 pound-feet of torque, is respectable, and there’s enough of it, particularly torque, to offset the 124’s extra mass. It’s the first application of this Fiat engine in a rear-wheel-drive chassis, and if it doesn’t rev as enthusiastically as the Miata’s naturally aspirated 1.5-liter four, there’s enough low-end punch to deliver sprints that should be pretty similar to those posted by its counterpart from Hiroshima. Let’s say 0-to-60 in about 6 seconds.

The bottom line: sports car fun with a welcome overlay of refinement.

The Fiat 124 Spider is a delightful sports car that will be a welcome addition to Fiat showrooms when it arrives this summer. The Miata may be a little more of an athlete, although the jury is still out on that score. But the 124 holds the edge in comfort and style. What’s more important to you? Nice to have a choice, isn’t it?