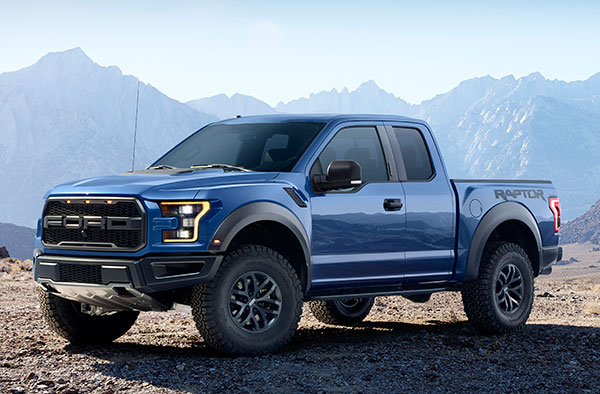 An all-new 2017 Ford F-150 Raptor goes on sale fall 2016 boasting more power and lightweight construction that will reduce its curb weight by about 500 pounds.

When it was launched as a 2010 model, the Raptor looked like the answer to a question asked by only a few. A formidable off-road monster? Great. After the gotta-have-it customers, all 50 of ’em, what’s the sales forecast?

The sales response surprised even Ford’s hard core truck troops. Though extreme, the Raptor quickly established itself as a popular niche product, with a best sales month of about 1400 in October 2012, contributing to about 13,000 for the year.

That’s a tiny percentage of total F-150 sales, but for a niche vehicle 1400 is pretty good. So when Ford began planning for the all-new aluminum intensive F-150, the Raptor was one of the variants selected to survive the transition.

And here it is. Introduced as a 2017 model at the North American International Auto Show in Detroit, the next-generation 2017 Raptor preserves the spirit and rugged look of the original in an all-new package.

Although the 2017 Ford Raptor isn’t as aluminized as its mainstream counterparts, it does have aluminum body panels, plus a composite hood and fender flares, and the Ford Performance group (replacing the former Special Vehicle Team) forecasts Raptor curb weights will diminish by as much as 500 pounds.

The original Raptor tipped the scales at 6000 pounds-plus, so that will be a welcome reduction. Especially allied with increased power. More on that in a minute.

The 2017 Raptor rides a new steel frame that Ford touts as stronger than the previous version. The suspension is enhanced by new heavy duty Fox Racing shock absorbers with greater capacity than the previous versions, for improved damping in rough stuff as well as increased suspension travel. There are coil springs up front, with aluminum control arms, and live axle and leaf springs at the rear.

Propulsion in the first-generation Raptor is robust, with a big 6.2-liter V8 channeling ample thrust (411 horsepower, 434 pound-feet of torque) to the rear axle. But it will be even more robust in generation-two, with a new 3.5-liter EcoBoost turbo V6 churning up between 450 and 500 horsepower and increased torque, according to Ford. Development of the new high-output 3.5-liter includes running in the Baja 1000, North America’s ultimate desert racing torture test. The powertrain engineers call this version of the engine EcoBeast, a name Ford has trademarked and may employ when the new Raptor is ready for showrooms.

Ford hasn’t finalized fuel economy numbers for the new Raptor (if economy is the right word), but it’s a good bet that it’ll be an improvement on the EPA ratings for the 6.2-liter V8: 11 mpg city, 16 highway.

The original Raptor was nothing if not the personification of off-road macho, and the second generation builds on that persona. With its lofty ride height, wide track (6 inches wider than the stock F-150), and giant Ford logos front and rear, it looks ready for the starting line of the Mint 400 desert race. And the LED-fired light pipes surrounding the headlights adds a tasty sci-fi look.

While dealers would undoubtedly welcome the new Raptor right now, they’ll have to wait. It won’t arrive until fall 2016, as a 2017 model. When it does, we look for pricing to open at about $50,000.