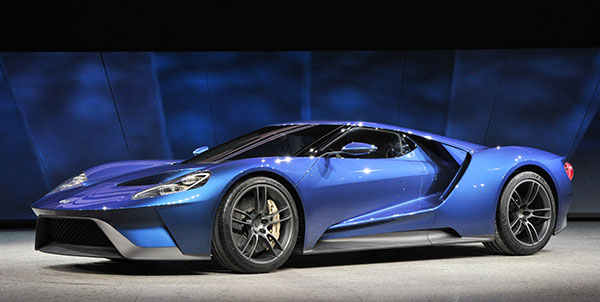 The 2017 Ford GT, the second generation of the mid-engine supercar inspired by the GT40 that won the Le Mans 24-hour race four times, was revealed at the 2015 North American International Auto Show in Detroit.

When revealed, the 2017 Ford GT generated more oohs and ahhs than any other vehicle on display, no mean feat in a show loaded with hot rides such as the long-awaited NSX supercar and a 200-mph Cadillac sedan and the Alfa Romeo 4C Spider. In addition to popular acclaim, the GT was selected by the Eyes on Design judges, all automotive designers, as the Detroit show’s best production vehicle.

At a glance, “best production vehicle design” might seem a little confusing, since Ford billed the GT as a concept. But Ford made it clear that it fully intends to build this blue bullet, as a prerequisite for a return to the Le Mans 24-hour race.

Ford created the first GT40 with the goal of beating Ferrari at Le Mans, and it won the Sarthe classic four consecutive times, in 1966, ’67, ’68, and ’69. Those victories were among the company’s greatest motorsports achievements.

To enter the race, Ford must build at least 100 production examples. It’s called homologation. Unless Ford plans to price each car at $1 million or more, there will certainly be more than 100 cars. As an example, production of the previous Ford GT, conducted between 2004 and 2006, came to about 4150 cars. And there was no factory racing plan for that one.

Here’s what Ford has revealed so far:

Ride height is adjustable, as is the active rear spoiler, which can be varied for both height and pitch. The doors are scissor-style, a la Lamborghini, rather than the gull wings of the 2005-2006 Ford GT. The missile-esque profile clearly shows wind tunnel sculpting, though Ford refrained from furnishing any aerodynamic values, such as coefficient of drag.

Nor was there any reference to curb weight. However, the minimum weight for the GT Le Mans class, or GTLM, where the Ford GT would be opposed by the Ferrari 458, Corvette, Aston Martin, Porsche 911, and Audi R8, is 2745 pounds.

The engine will be an updated version of an EcoBoost V6 with twin turbos, variable port/direct fuel injection, generating more than 600 horsepower, according to Ford engineers.

Production of the upcoming Ford GT is due to begin in late 2016. We look for street versions to begin reaching selected Ford dealers before the race.