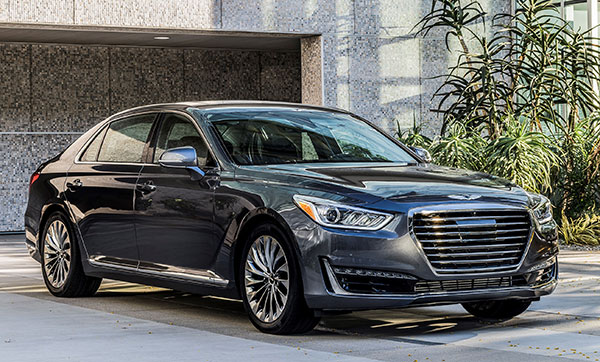 The 2017 Genesis G90 is a totally new luxury sedan from Hyundai, larger than any previous Genesis, and available with all-wheel drive and a V6 or V8 engine.

Brand startups are expensive, risky and consequently rare in today’s automotive world, but here’s Hyundai jumping into a market segment, luxury prestige, that’s populated by brands that have been building on their pre-eminence for decades: Acura, Audi, BMW, Cadillac, Infiniti, Jaguar, Lexus, and Mercedes-Benz.

However, unlike other startups, most recently Tesla, Genesis isn’t exactly starting from scratch. The brand name has been with us since 2008, with a Hyundai prefix, and the sedan we’ve known as the Hyundai Genesis now becomes the Genesis 80.

But if the brand isn’t totally all-new, the G90 is. It’s the brand’s flagship, the first of a variety of new offerings that will be unique to the Genesis brand, and it’s typical of Hyundai’s approach to the business: solid engineering, first rate assembly, attractive styling, lots of standard features, and an exceptional price-value index.

This is a big sedan, similar in size, and roominess, to the long-wheelbase Audi A8L and BMW 7 series. It’s not quite the biggest among its contemporaries, but the G90 is sizable and handsome enough to create the right kind of presence at the country club, the kind of car that winds up in the front row of valet parking at Spago’s, in L.A.

All-wheel drive is an option with both engines.

Its styling may not be adventurous, but the G90 has an upscale curbside presence, its long, low rear-drive proportions suggesting power and luxury, which of course is the whole idea. If it isn’t exactly a head-turner, it’s no wallflower, either.

The styling appears derivative, with elements that appear borrowed from elsewhere. The going-away view, for example, has strong hints of Mercedes-Benz, while the big, bold grille treatment looks as though it could have been come from a design studio in Ingolstadt, Germany, home of Audi.

Colors, a dark blue, a brown, and a quartet of silver grays, are on the somber side, and the standard 19-inch wheels come in just a single design.

Attractively designed and elegantly appointed, the inner G90 is a essentially a textbook example of how a luxury car should be equipped. Leather seats (heated and ventilated up front, of course): check. Multi-way power adjustability (22 ways for the driver): check. Leather on the dash, door panels, and steering wheel: check. Premium (17-speaker Leixcon) audio: check. Power soft close doors: check.

Power moonroof: strangely absent. There is no rear-seat entertainment system, the windows cannot be lowered by pressing a button on the key fob, nor can the car be started remotely.

Back to the positive side of the ledger: Interior trim includes real wood, stainless steel, and aluminum, handsomely done. A 7-inch information screen resides between the major gauges (tach and speedo), no squinting required to read this one, and that goes double for the lucid icons on the big (12.3-inch) screen in the center of the dashboard.

Another nice detail: a color head-up detail (no squinting for this display, either). As you’d expect, the G90 is equipped with the latest driver-assist safety features. And, a little pampering, three years of free service, including valet service and free loaners.

As noted, there’s plenty of move-around room in this posh interior. And interior noise levels at freeway speeds are extraordinarily low.

A couple of quirks: The electric parking brake is on the dash to the left and below the steering wheel, not the first place we looked for it. Also, sliding the shifter leaves the transmission in Reverse, not Park, which is engaged by pressing a button.

Our initial G90 driving experience was at the official press preview, held in British Columbia, and consisted almost entirely of a freeway run from Vancouver to Kelowna, about 300 miles total.

This is not the kind of driving that provides a comprehensive picture of a car’s dynamic capabilities, but even so a few solid impressions emerged.

Tops on the list is quiet operation. As a general rule a chapel-silent interior is a solid asset in a luxury car, and the G90 is going to rank near the top of its class in this metric. Set your decibel meters to whisper.

Ride quality will likely score well with most prospective owners. Although the multi-mode driving choices (Eco, Smart, Individual, Sport) allows the driver some tuning latitude with the Sachs/ZF dampers, the G90 is a smoothie. Even in Sport mode there’s nothing in its freeway behavior to suggest autobahn development, the trait that distinguishes the high roller Germans.

Steering firms up as speed increases, but it lacks much in the way of tactile information for the driver, not much sense of just how much the front wheels are turning, and very little on-center feel, regardless of speed.

Power: it’s hard to imagine anyone being dissatisfied with the straight ahead performance of the 3.3-liter twin turbo six, and it’s hard to imagine that the 5.0-liter V8 would add a great deal to the G90’s off-the-line thrust. The extra horsepower would show up as the speedo climbed past 60.

We didn’t log any seat time with the V8 version, so impressions on that one will have to wait for a later date.

Genesis may be an all-new brand but the business case is typically Hyundai: a quietly handsome car, with solid assembly, respectable power, plenty of room, a high comfort index, and lots of features for the money. The formula worked for the Hyundai Genesis, and it will work for the G90 and the Genesis brand vehicles due to hit the market in the next few years. The G90 may not pack the prestige or quite the character of the established luxury sedans, but for those who aren’t prioritize value, it has everything else.