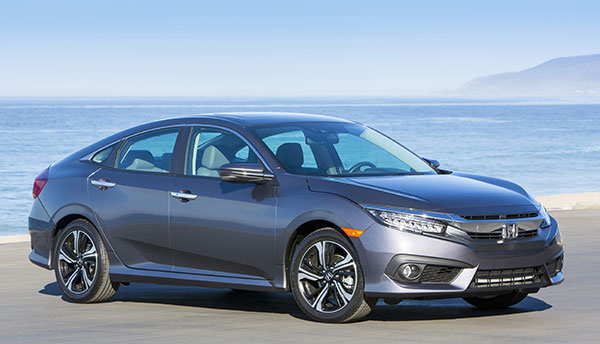 This latest generation of the Honda Civic is an outstanding compact car, available in sedan, coupe, and hatchback versions.

The Honda Civic is an institution, part of American life for 50 mostly successful years. In 2015 it was getting boring and slow, and for 2016 it was totally redesigned. This latest Civic sedan is three inches longer and two inches wider than the previous-generation model, nearly as big as a midsize Chrysler 200. The Civic was a contender again.

The sedan was followed later in the year by a coupe.

For 2017, the hatchback arrived, back to where it belongs. The 2017 Civic Hatchback brings the Civic full circle, to the very first one. Except hatchbacks sure aren’t shaped like they used to be. This one looks more like a coupe.

Soon you can get a big wing on the back, with the Type R hatch. It will be the first time the Type R has been offered in the U.S.

The Civic in its upscale models feels more like a premium car than an economy car. The sedan has a smooth ride and general feeling of refinement. It isn’t sporty but it handles well, and the brakes are smooth, and easy to modulate. It’s calm.

The standard 2.0-liter four-cylinder engine making 158 horsepower, about the same as a Mazda3, isn’t thrilling. It comes with either a 6-speed manual transmission on LX models that we really like, or a continuously variable transmission (CVT) that isn’t new, doesn’t have paddle shifters and is less than thrilling.

Fuel economy with the manual gearbox is EPA-rated at 31 mpg Combined, while the CVT rates 35 mpg.

You’ll get the same mileage and have more fun with the quicker and more responsive 1.5-liter turbocharged engine making 174 horsepower. It has a better CVT, as well.

Civic EX-L ($23,800) is available with the turbocharged 1.5-liter engine and CVT. Civic Touring ($26,600) gets the HondaSensing safety suite, navigation, LED headlamps and 450-watt audio. (All prices are MSRP and do not include destination charge.)

The sedan looks big, not like an economy car at all, with a sleek and sweeping profile like the Honda Crosstour. The sheetmetal might be exciting to a fault, with its creases, slits and intakes. It flaunts its size and edginess by being low and wide, with flared wheels and a wedged tail with Acura-like taillamps.

The Hatchback is the same as the sedan, from the B pillars between the doors to the front of the hood. But it’s four inches shorter overall, so everything behind the pillars is distinctive, and downright swoopy for a so-called hatchback. The only thing hatchbacky about it is the back is a hatch.

The cabin is tame and organized, a horizontal dash with a single screen, almost a Teutonic flow. The dash is low and the front seat raises, so forward visibility is excellent. The gauges are clean and crisp, except on the deluxe Touring model, which gets a digital display on an LCD screen with a 270-degree tachometer.

There’s a lot of room inside, enough for a six-footer in back with an inch of kneeroom to spare. There are many clever storage spots, and a big 15-cubic-foot trunk.

The Hatchback’s passengers won’t know it’s not a sedan, although the trim is a bit different. The cargo space is a very generous 25.7 cubic feet behind the second row, so that’s already way ahead of the sedan; and then when you drop the seat you get an awesome 46.2 cubic feet. Considering its four inches shorter than the sedan, that’s dazzling.

Honda is working the cargo thing to young buyers, maybe those stepping up from a Fit who are spoiled by the cargo space created by the nearly flat-folding Magic Seats, including the front seats. The Hatchback also features an innovative sideways sliding cargo cover that can be stowed on either side. The Hatchback is nearly as quiet as the sedan and coupe with the cargo cover up, as it blocks noise from the open space in the back.

The 158-hp standard 2.0-liter engine is as boring as the whole car had become two years ago.

The 1.5-liter turbo is much quicker, as the Civic weighs less than 3000 pounds, and the engine’s 174 horsepower can just handle that weight. It’s a small turbo with an electrically driven wastegate. It sounds sweet at full throttle, though there is some turbo lag. The turbo engine has a Sport mode that helps things, as well as an Econ mode that gains fuel mileage but robs power. The turbo comes with a continuously variable transmission, which is smooth and quiet but not quick or exciting.

The new Type R hatch gets a 2.0-liter turbo.

Ride and handling is where the Civic excels. It’s precise, composed, and beautifully compliant. It doesn’t dance over bumps, it manages them. The suspension uses struts in the front with hydraulic bushings, and multi-links in the rear with a rigid subframe, with hydraulic bushings on EX-T models and above, as well as 17-inch wheels and tires. Same with the turbocharged Civics.

The Civic LX and EX ride on pedestrian 215/55HR16 tires that run out of grip and ability to cushion the ride on bad pavement, but still the ride’s not bad. Handling is predictable even when grip is not, as we observed on wet roads covered with leaves.

Because the steering column is thicker (for crash worthiness, which the Civic aces), the Civic uses a sophisticated steering system, a dual-pinion, variable-ratio setup like on the Buick Verano. There’s a motor in the steering rack that provides gradual and consistent steering boost.

The brakes are firm and fast to respond, with a short pedal stroke.

The Civic Si turns up the turbo boost to get 205 horsepower out of the busy engine. The suspension uses solid bushings to tighten it up, and the six-speed manual has a short throw and smooth clutch.

The Civic is better than it’s been for a decade. The mainstream models are easy and convenient. Sporty models add sports appeal. They do everything well.