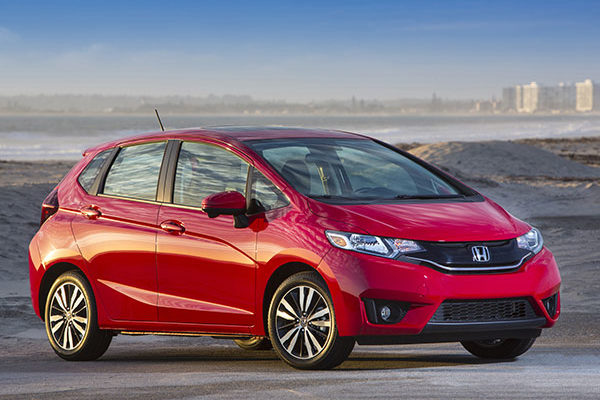 The five-door Honda Fit, last redesigned for 2015, is an exceptional hatchback, for its performance, packaging, cargo/interior capacity, looks, and fuel efficiency.

Tall in height, short in length, the Fit is a benchmark of versatility and space efficiency. Fit is roomier inside than many midsize sedans, with 39.3 inches of rear legroom. It’s like a Harry Potter tent, tiny from the outside, impossibly large inside.

The Fit is powered by a 1.5-liter four-cylinder with direct injection, making 130 horsepower and 114 pound-feet of torque. A smooth 6-speed manual gearbox is standard, but a seven-step continuously variable transmission (CVT) with paddle shifters comes on most models.

Fit with CVT rates an EPA-estimated 33/41 miles per gallon City/Highway, 36 mpg Combined. The manual transmission in the Fit LX and Fit EX gets 29/37/32 mpg.

NHTSA and IIHS both give the Fit excellent safety ratings, although the option of automatic emergency braking isn’t available; it’s standard in Toyota’s subcompacts.

The Fit is five inches taller than the Honda Civic sedan, and has a long roofline with ample glass, so it looks more like a boxy wagon with a wedge-shaped nose, than a squat hatchback. At 60 inches to the roof, it’s one of the tallest subcompacts on the market.

The Fit is not sleek like the Ford Fiesta, but it’s attractive and eye-catching (especially in white) in its angular way. The windshield is nearly as steep as the short nose. A sharp character crease low on the sides exaggerates the length. The rear end hints Volvo, with long vertical taillamps that drop from the liftgate to the bumper. A big chrome bar runs across the back, blowing the otherwise cohesive styling.

The look and feel of the interior aren’t impressive, but the space and flexibility are unrivaled. The rear seatback drops down and rear seats flip up, to create relatively vast cargo space, from an event called Magic Seat, with four cargo/seating arrangements. 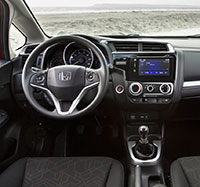 A Refresh mode tilts the rear seatbacks like a lounge chair. The front passenger seat in Long mode also can fold flat, wonderful for sports equipment or construction materials. A whole bicycle can be swallowed in the cargo area, something that’s not possible with some significantly larger crossovers.

The rear seat is also very comfortable, with great legroom and headroom, although the Magic Seat cushion is a bit thin. The tall door openings make entry and exit easy for a subcompact.

However the front seats are only adequate, again with thin cushions, but also compromised legroom because the seats won’t slide back far enough. The passenger footwell has an odd shape that cants the seating position.

The interior materials are durable enough, but not at all luxurious. The carpeting and headliner appear cheap. The ambitious and busy dashboard feels somewhat haphazard, with many angles, shapes, bits and pieces. The small crossover Honda HR-V, based on the Fit, is simpler and more relaxing to the eye and brain.

The Fit is one of the quieter cars in its class, however there’s wind noise on the highway coming from around the large sideview mirrors. And there’s engine noise at full throttle, suggesting thin sound insulation.

The 1.5-liter engine is peaky, reaching its maximum torque of 115 pound-feet at 4600 rpm, while its sweet spot for zip is about 4000 rpm. Yet it’s not particularly high-revving, meaning its horsepower isn’t way up there. This powerband makes the paddle-shifting 7-speed CVT a well-matched transmission, because downshifting for torque is quick and easy. The CVT has a sport mode that quickens throttle response, as well.

The standard 6-speed manual transmission is precise and shifts sweet, about the best we’ve experienced in a subcompact. However the CVT is also good, as it doesn’t bear the rubberband-like burden of too many CVTs; and it’s way better than the Nissan unit. Honda appears to be refining its CVTs, making their operation indistinguishable from a smooth automatic.

As for driving dynamics, we liked the pre-2015 Fit better, especially on curvy roads where it was delightful. The 2017 version is fun, but the redesigned suspension of front struts and stabilizer bar (starting with the 2015 models) does more to make the ride solid than it does to keep the handling quick. It leans more in the corners and dives more under braking than the pre-2015 models did. The H-type torsion beam rear suspension controls the ride well at the rear wheels. It might be a bit more choppy than compact and midsize cars, because of its wheelbase that’s shorter than those cars, but it’s at the top of its own subcompact class. The brake pedal is precise and easy to modulate. 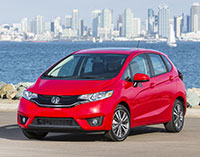 You can’t go wrong with a Honda Fit, and few have. It’s in a class of its own for a subcompact hatchback, in reliability, economy, performance and interior versatility.

Sam Moses contributed to this report, with driving impressions by The Car Connection staff.