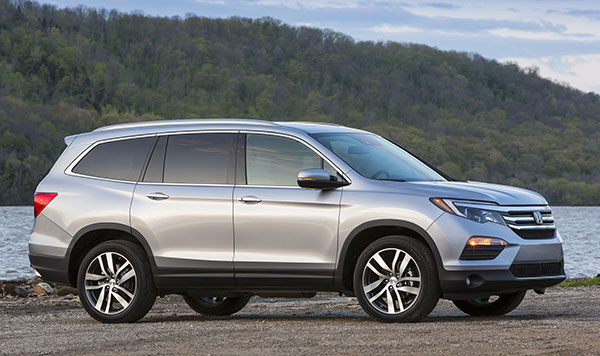 The Honda Pilot was redesigned for 2016, making it the third-generation of this crossover SUV. It carries over to 2017 unchanged.

The Honda Pilot was one of the first big crossovers, and it was a hit. With its rounded edges, the first-generation Pilot tried to look like the Ford Explorer, and it succeeded as a Volvo wagon for people priced out of Volvos. In the second generation it got boxy like SUVs, and that styling didn’t work. Now in its third generation, it’s rounded again.

With three rows of seats and seating for eight, it’s Honda’s most versatile vehicle. The ride is compliant and plush, the steering relaxed. It feels luxurious and mature, like its upscale sibling the Acura MDX. Front-wheel drive is standard, all-wheel drive available. On top of that, there’s an optional traction management system for more traction in snow or mud. It can tow up to 5000 pounds.

Pilot pulls strongly with its 280-horsepower V6. It uses either a 6-speed or 9-speed automatic transmission. The 2016 redesign cut a lot of weight; it’s now between 4054 and 4317 pounds, depending on equipment, while some rivals hit 5000 pounds.

In crash testing, the Pilot earns a Top Safety Pick+ from the IIHS, but it received only an Acceptable rating for headlamps, so be careful at night. It gets five stars overall from the NHTSA, with four stars from frontal crash results.

Safety equipment includes a wide-angle rearview camera, and as the models increase in price, more equipment is added, including blind-spot monitors, a LaneWatch camera with a wide view down the right side of the car, a multi-rearview camera, adaptive cruise control, lane-departure warning, active lane control, road-departure warning, and forward-collision warnings with automatic emergency braking. Also, it won’t go into gear if the driver’s seat belt is unlatched or the door is open.

With front-wheel drive and the 6-speed automatic, the 2017 Honda Pilot is EPA-rated at 19 miles per gallon City, 27 Highway, and 22 Combined. One less mpg with all-wheel drive. The 9-speed transmission improves that by about one mile per gallon. In our long-term road-test Pilot, we’re seeing 19 mpg Combined.

Pilot EX and EX-L trims get a larger 8.0-inch display and the Android-based Display Audio interface, with its big tiles and icons and generally friendly operation. The Pilot EX-L ($35,905) sports leather; a power tailgate; a power moonroof; heated front seats; and the one-touch second-row seat.

With soft corners and rounded fenders, the Honda Pilot balances its glass to metal better than any rival, for example the Chevy Traverse, and stays away from the rugged look of crossovers like the Dodge Durango. 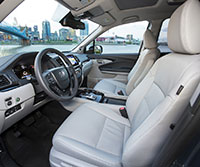 The Pilot is very well finished, with a neatly organized cabin surrounded by lots of glass, from tall side windows to an available huge panoramic roof that floods the cabin in natural light.

We see design elements borrowed from the Accord sedan, as well as some utility touches from the CR-V. All the lines and materials are subdued, save for the big touchscreen on upper trim levels. Soft-touch surfaces give it enough luxury to compare well to crossovers like the Buick Enclave.

The front space and comfort is excellent. The seats are well bolstered, with good definition, on the EX-L models and higher. A high driving position gives a commanding view out of the vehicle even for short drivers.

The controls and storage in front are usefully placed and arranged. The steering wheel has round controls to operate the driver’s smartphone and the car’s audio system, needed because there’s no volume control on the touchscreen; the passenger is out of luck. A shallow bin in front of the deep cupholders holds a smartphone right next to a high-power USB port. There is no shift lever with the 9-speed transmission, giving space. A sliding lid covers the deep center console.

Second-row seating is a split-folding bench or a pair of captain’s chairs on upper trims; between those buckets is a floor-mounted tray with cupholders. On EX-L and above, a power button folds forward the second-row seats and slides them forward. The floor is low and there’s room to climb back to the third row. At least for kids; it’s a bit tight for adults.

But once they’re back there, there’s an amazing amount of space. Head and leg room are as good as we’ve ever seen, although the seat cushion sits on the floor.

On the EX-L trim level, an acoustic windshield absorbs some noise. Touring and Elite models get acoustic glass on the front doors, so passengers can talk with ease.

Honda’s audio and infotainment systems aren’t the best, but the Apple CarPlay and Android Auto interfaces are easier than before.

The SiriusXM audio system has time-shifting capability. You can create a custom channel that blends several stations into one, while it buffers songs so that repeat playback is possible. The system can also drop in alerts on the display for scores and weather.

Apple’s Siri Eyes Free is also included in the Pilot’s Display Audio system: just hold down the steering-wheel “talk” button and you’ll be able to ask Apple devices for all sorts of information.

The Pilot’s engine is a revamped version of Honda’s direct-injected 3.5-liter V6. Wound up toward redline, it has a lovely engine note that underscores Honda’s legendary reputation as an engine builder. We estimate acceleration from zero to sixty in less than seven seconds.

The LX, EX and EX-L use a 6-speed automatic transmission, while the Touring and Elite get a new 9-speed automatic, which brings one more mile per gallon. We prefer the 6-speed. It has a narrower spread of gears, making it a bet less quick from the start and a bit less relaxed on the freeway, but it shifts more cleanly. Only once or twice did we feel it wait too long to upshift; while with the 9-speed, it happened fairly often. It also surged when it sought a gear lower than we did. If we had wanted that gear, and had shifted with the paddles, there wouldn’t have been an issue.

With the 6-speed, there’s a shift lever on the console. With the 9-speed, a bunch of buttons replaces that lever, as well as the paddles. The 9-speed also has a Sport mode and shift logic that anticipates downhill gear changes, and can hold gears when cornering. Clicking the left paddle twice does a double downshift to make the most of the engine’s energetic thrust and sound. When you use the paddles one time, the transmission goes into manual mode for 30 seconds, before reverting back to automatic in order to save fuel. If you put it in Sport mode, the transmission stays in manual.

Torque vectoring on AWD models directs more power to the outside wheel in a turn to help it turn in better in turns. Pilots with 20-inch tires have softer shocks to offset the harshness from the short sidewalls. Front-wheel-drive versions with 18-inch wheels and tires have firmer suspensions.

The AWD can send up to 70 percent of available torque rearward, then split that power between the two rear wheels using electronic actuators and hydraulic clutches. It all happens quicker than you can think.

Most models come with traction control with several modes (Normal, Snow, Mud, or Sand), enhancing capability in foul weather, but it’s limited and not designed for rugged terrain.

The available road-departure mitigation can help inattentive drivers stay in their lane, but we found it annoying.

The Honda Pilot offers a huge amount of value and quality for its price. If you need to seat eight, it’s impossible to go wrong. It might not be number-one in any mechanical or cosmetic category, but it’s up there in all of them.