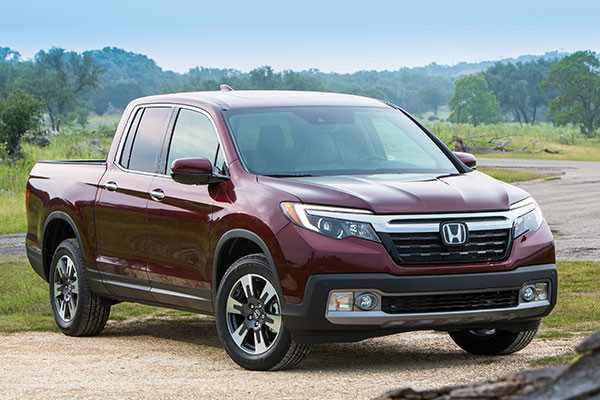 The all-new 2017 Honda Ridgeline is a unique pickup.

Unique is a word that suffers a lot of misuse in the automotive lexicon. For example, we hear the term “very unique” in connection with some rarefied vehicle. But the fact is the word is absolute, referring to something that’s one of a kind.

Thus, in the world of pickup trucks, unique can only be used in connection with the Honda Ridgeline. Returning from the brink of extinction, it’s the only unitbody pickup in the business: the chassis is integrated with the body. All the others are body-on-frame: the chassis and body are worked up separately, and meet late in the assembly process.

The distinction is important, for two key reasons. First, though traditional body-on-frame vehicles are rugged and capable of absorbing more punishment, as in off-road, heavy hauling or heavy towing, unitbodies generally have a higher chassis rigidity index. That was true of the first-generation Ridgeline, and the 2017 redesign is even stiffer, with a 28 percent increase in torsional rigidity, according to Honda.

Second, a unitbody will be considerably lighter than its body-on-frame counterpart of similar size. That’s why all contemporary passenger cars are unitbodies.

The 2017 Honda Ridgeline shares much of its structural foundation with the latest Honda Pilot SUV, as well as its 3.5-liter V6 engine and 6-speed automatic transmission. The Ridgeline chassis is based on front-wheel drive, with the option of all-wheel drive.

The 2017 Ridgeline offers more power on tap than in the previous generation: 280 horsepower, 262 pound-feet of torque.

Fuel economy improves as well, and Honda claims best-in-class for this: 19 mpg City, 26 Highway with front-wheel drive, according to the EPA, 18/25 mpg City/Highway with all-wheel drive. Best-in-class is a little misleading, however, since it applies to competing V6 trucks. It ignores four-cylinder gasoline engines, as well as the GM diesels, which are projected to achieve 21 mpg in the city, 30 mpg on the highway.

The 2017 Ridgeline is bigger than the first generation. More cargo bed capacity, with room between the fender wells for a 4 x 8 slab of building material. Higher payload rating: 1584 pounds. And the roomiest interior in its class, according to Honda.

This second-generation Ridgeline retains two popular features that distinguished the original: the two-way tailgate and the in-bed lockable trunk. And it adds new tweaks, including one sure to score with tailgate party aficianados: available speakers in the cargo bed walls.

As noted, this is a bigger Ridgeline. Overall length (210 inches) and wheelbase (125.3 inches) have both stretched 3 inches, and the cargo bed has gained 4 inches in length, to 64.

But the element that’s really striking is the styling. The original Ridgeline was unique and looked unique, unlike any of its compact competitors, or for that matter any pickup truck, great or small. This resonated well with some buyers, but not nearly enough of them.

Consequently, the new Ridgeline, though unique in terms of architecture, looks much more like a conventional pickup. The front end has a more traditional pickup look, and includes the option of LED lighting, but the biggest change is amidships. The flying buttresses descending from the roof of the cabin partway down the cargo bed rails are gone, and the new cab looks pretty much like any other pickup.

As before, the Ridgeline is offered in a four-door crew cab body style. And as before, it includes the two-way tailgate, side-hinged and bottom hinged, very handy, and the voluminous, lockable in-bed trunk, even handier. A set of 18-inch wheels joins the inventory, a 400-watt power inverter allows owners the option of setting up a big screen TV in the bed of the truck, and as noted earlier there’s the option of a sextet of speakers integrated in the cargo bed walls.

Properly equipped, the Ridgeline is the ultimate tailgate party special.

Roominess is the trump card of a vehicle’s comfort quotient, and the Ridgeline has it double in spades. The Ridgeline is crew cab only, no regular or extended cab versions, and the rear seats provide abundant space (knee, head, hip) for three passengers. And with the seats folded, rear cargo space is best in class, according to Honda.

The Ridgeline’s controls are straightforward, attractive, and generally easy to employ without resorting to the owner’s manual. An exception might be the touch controls on the big center dash screen; Honda appears to have developed a phobia against even the simplest of switches and/or knobs, even for audio adjustment. On the other hand, the new nav system is much easier to operate, the display screen is large, as are the various icons, and the infotainment and connectivity options, which now include the choice of Apple Car Play or Android Auto, are contemporary.

Contemporary also applies to safety features, with available adaptive cruise control, autonomous emergency braking, and lane departure warning and lane assist, among others. However, the lane departure feature is a little too eager to assert itself, jiggling the steering wheel when the truck even gets close to a lane edge line.

Back on the positive side of the score sheet, interior materials are high quality, the relaxed fit front bucket seats are all day comfortable, and audio systems range from good to excellent.

Light duty pickups, such as the Ford F-150, Ram 1500, and Chevy Silverado, are becoming more and more civilized. Nevertheless, in terms of ride quality, quiet operation, and general comfort the Ridgeline stands at the top of the charts. This is a very smooth operator, composed and compliant on all surfaces, paved or graded gravel.

The structure feels exceptionally solid, and the suspension tuning is a little firmer than on the mechanically similar Pilot. This is due in part to spring rates specified to handle 1500-pound payloads, but it doesn’t diminish the Ridgeline’s ride.

Power is respectable, though it can’t be called thrilling. At some 4500 pounds, the second generation Ridgeline is heavier than the original. Also, the towing capacity, 5000 pounds with all-wheel drive, 3500 pounds for front-drivers, is near the bottom of the list of midsize pickup ranks.

If towing is a priority, GM’s new middies, Chevy Colorado and GMC Canyon, both offer the option of diesel power.

If it’s not, the Ridgeline rates top marks in every other area of operation.

In a world of pickup refinement, the new Ridgeline raises the bar. Regarded as yesterday’s news when it went out of production in 2014, it’s been resurrected, reengineered and, perhaps most important, restyled. It’s a remarkable blend of engineering and imagination, a pickup truck that’s equally adept at truckish tasks or everyday transportation. The midsize pickup class is making a comeback. And this truck is leading the charge.