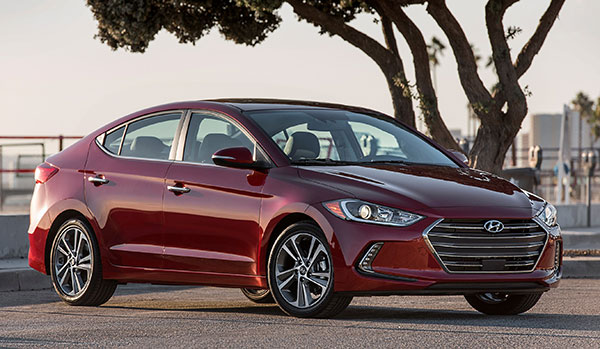 The 2017 Hyundai Elantra is all-new, an attractive compact sedan with impressive quality creds and a strong value proposition. Elantra competes with the Honda Civic and Toyota Corolla.

Like any major makeover, the 2017 Elantra sports new sheetmetal. It’s also a bit bigger than the previous generation. But perhaps its most impressive upgrade is structural. Thanks to a higher percentage of high strength steel and increased use of structural adhesive, 394 feet of industrial glue, according to Hyundai, the new unitbody is 30 percent stiffer.

There’s new under the hood as well, specifically, two new engines, and one new transmission.

As with the previous version, the sixth-generation Elantra comes standard with a 2.0-liter Atkinson cycle four-cylinder, available with either a 6-speed manual transmission or a 6-speed automatic. However, output of the 2.0-liter has been reduced, from 173 horsepower to 147, an adjustment presumably made in the interest of fuel economy.

Fuel economy is an EPA-estimated 26/36 mpg City/Highway for the Elantra SE with manual transmission, 29/38 mpg with the automatic, an improvement of several miles per gallon over pre-2017 Elantra models.

The optional engine, propelling the Elantra Eco, is a turbocharged 1.4-liter (128 hp, 156 pound-feet of torque). It sends power to the front wheels via a 7-speed dual clutch automatic. At this writing, Hyundai was awaiting official EPA fuel economy ratings for the Eco, but anticipates 32 mpg city, 40 mpg highway. Also, with the official Eco on-sale date slated for May, pricing was yet to be announced.

As with the recent renewal of the Sonata, Hyundai went more conservative in restyling the Elantra. Instead of the sculpting that distinguished the sides of the fifth generation car, the 2017 version is distinguished by a strong character line running from the top of the front wheel arches to the taillights, and a another horizontal crease above the rocker panels connecting the wheel wells fore and aft.

The net result is an Elantra that could easily be mistaken for its larger cousin, the Sonata. Hyundai characterizes the new design as confident.

We don’t think it stands out in the compact sedan scrum as much as the previous generation. But no one can call it a wallflower.

The 2017 Elantra is a slightly bigger Elantra than before. At 179.9 inches it’s not quite an inch longer than generation five, on the same 106.3-inch wheelbase. Height, 55.6 inches, carries over, but width expands by an inch, to 70.9. That doesn’t sound like much, but the Hyundai interior design team managed to create more interior space, an achievement the more remarkable in a package with the same wheelbase as the outgoing model.

Nevertheless, by EPA standards, which are based on interior volume, the new Elantra qualifies as a mid-size sedan, a distinction it shares with the Honda Civic and Toyota Corolla. What this adds up to in practical terms is a rear seat that’s habitable by adults of moderate size. The center seat, like those in all compacts, is suitable for small kids in child seats or perhaps the occasional passenger who is either a good sport or someone you don’t like.

Just as important, the interior furnishings are distinctly upscale by compact sedan standards; luxurious, even. There are almost no hard surfaces inside, and almost no shiny plastic.

The first two points of owner contact within, seat and steering wheel, are both satisfying, the seats for their comfortable padding and support (relaxed fit), the wheel for its just-right rim section and grip. Leather is part of the Limited trim level, but the standard cloth upholstery looks good, feels like quality, and looks as though it will wear well.

Instruments and info screens are attractively legible, and controls are well placed and devoid of operational mystery. Also, we’re happy to see that Hyundai, unlike some carmakers, hasn’t yielded to the tyranny of total touch screen controls. Buttons and knobs still work just fine for many functions, as evidenced in the Elantra.

Infotainment and telematics have been upgraded and now include Apple Car Play and Android Auto. Navigation is optional.

If 0-to-60 mph is one of your top priorities, brisk 0-60, that is, this may not be the right compact sedan for you. The basic 2.0-liter ranks near the tepid end of the compact sedan standard engine spectrum, and reaching the mile-a-minute mark is likely to consume about 8 seconds, regardless of transmission choice. And we note once again that only the Elantra SE, the entry end of the lineup, offers this choice. Higher trim levels are automatic only.

While brisk acceleration is the antithesis of economical driving, it’s a plus in the cut and thrust of commute motoring, as well as passing exposure on two-lane highways. Getting around a slower car on a winding back road with the Elantra requires patience and planning.

Other sectors of the Elantra’s dynamic scorecard grade out better. The electric power steering system has been improved, though there are others in the compact sedan category, the Honda Civic, for example, that are distinctly more tactile.

Similarly, while its suspension tuning is conducive to smooth ride rather than eager responses, the Elantra’s stiffened structure has a reassuringly solid feel that inspires confidence at the wheel. It’s not the kind of setup that’s likely to challenge a Honda Civic or Mazda 3 in a slalom contest or double lane change test.

But the more robust structure, as well as wide-ranging attention to noise suppression, contribute to a commendably quiet cabin at all speeds. That’s a key factor in the comfort equation, and that’s the Elantra’s strong suit.

The all-new Hyundai Elantra is ho-hum in terms of getaway punch, but is otherwise a pleasant place to be as the miles slide by: smooth, quiet, and composed. Its looks are contemporary, it’s exceptionally solid, and it’s comfortable on gnarly surfaces. And the bottom line: like all Hyundais, its value proposition is hard to beat.