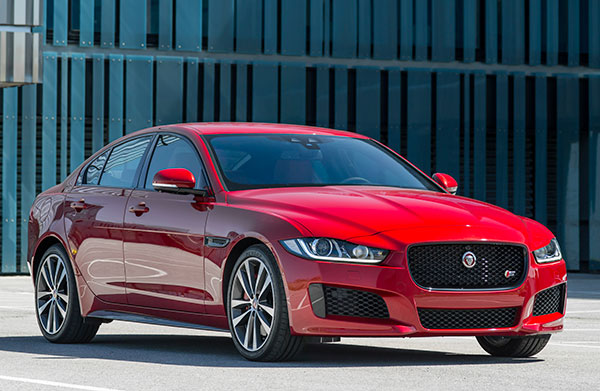 The Jaguar XE is the brand’s new compact four-door, conceived and designed to be a serious challenger in a sport sedan market segment that’s been defined and ruled for decades by the BMW 3 Series. This is the first time Jaguar has been a player in this arena since the X-Type (2001-2009).

Inspired by and developed from the superb F-Type sports car, the Jaguar XE’s foundations are aluminum intensive and exemplary in terms of structural rigidity. Basically a rear-drive platform with the option of four-wheel drive, the architecture is shared with the new Jaguar F-Pace crossover sport-utility and will also be adapted for another sedan in the not-too-distant future.

Like the F-Type sports car, the Jaguar XE delivers that rare connection between the machine and the individual behind the wheel: the vehicle as an extension of the driver’s will. Handling is excellent. This new Jaguar sedan is as quick on its feet as many sports cars.

At launch there are two engine options: a supercharged 3.0-liter V6 (340 horsepower, 332 pound-feet of torque) and a 2.0-liter turbodiesel four-cylinder (180 hp, 318 lb-ft), both sending power to the rear differential via an 8-speed automatic transmission. Jaguar plans to add a 2.0-liter turbocharged gasoline four-cylinder (240 hp, 251 lb-ft) later in the 2017 model year. All three engines will feature stop-start technology. Performance from the V6 is very quick, with 0-60 mph possible in about 4.5 seconds.

Like all new cars, the Jaguar XE offers a lengthy menu of infotainment features, operable in this instance by touch-screen controls augmented by voice command. There’s also a comprehensive list of driver assist and safety features that’s comparable to other cars in this entry luxury sports sedan category.

The new styling is clean but conservative, with distinctly sporty proportions, not much car extending beyond the front axle, a wide stance, and wheels that fill up the wheel wells. Jaguar’s new signature grille distinguishes the front end, and the wide horizontal LED taillights emphasize the car’s width and muscular haunches.

Fuel economy is an EPA-estimated 21/30 mpg City/Highway for the rear-wheel-drive supercharged 3.0-liter, 20/29 mpg with all-wheel drive. (We have yet to see formal EPA ratings for the turbodiesel, but Jaguar anticipates a highway rating of 40 mpg-plus.)

Jaguar’s approach to the XE design is consistent with that of its German competition and in fact with most contemporary sedan styling: a readily recognizable front fascia (long established at Audi, BMW, and Mercedes) and subdued sculpting elsewhere. The Jaguar XE may not turn many heads when it cruises by, but on closer inspection it becomes more seductive.

We’ve already noted the sporty proportions, and the brim-full wheel wells. More subtle is the way the tight fit of the sheetmetal, which emphasizes the muscular elements of the design like a spandex outfit on a high octane athlete.

Ian Callum says the shape is “about paring it down to the bare essentials. Good designers have always said less is more.”

Less also applies to curb weight, thanks to extensive use of aluminum in the XE’s body panels and structural elements.

The clean contours are also about aerodynamic efficiency, contributing to a quiet interior and, together with the relatively low curb weights (substantially lighter than a corresponding BMW 3 Series, for example) respectable EPA fuel economy ratings.

Jaguar sedan interiors were once distinguished by handsome swaths of walnut or bird’s eye maple, and glove leather upholstery. That was a long ago era, of course, and interior materials have changed. But the cabin of the new Jaguar XE is just as posh as its elegant ancestors, with a far greater array of infotainment and driver-assistance features.

Simplicity is the critical element in successful design, and the broad sweep of the XE’s upper dashboard looks one continuous shape, rather than the busy ups, downs and cut lines of some contemporary layouts. The instrument binnacle shelters electronic interpretations of the classic analog tachometer and speedometer, made modern by the info display tucked between them. The grippy three-spoke, leather-wrapped steering wheel includes a variety of auxiliary controls, as expected in a modern entry luxury automobile.

And of course access to a good many infotainment and connectivity features is achieved via a center dash touch-screen, another increasingly common feature in contemporary cars. There are drawbacks to this dependence on touch-screen: being precise with the touching can be tricky when the car is in motion.

On the other hand, the climate controls, located just below the center screen, consist of familiar switches, well marked and easy to adjust. This also goes for seat heater switches.

Other demerits: the nav system is slow and a little labyrinthine. And the circular gear selector, a feature pioneered by Jaguar, can be irritating. Not for its function; drivers have long since come to accept dial-a-gear. But the selector’s chrome top gets painfully hot in direct sunlight, even when it’s not deployed.

Also, roominess is not an XE long suit. Making adult-size rear-seat passengers happy requires a bit of cooperation from those up front, and the center rear seat is not a perch we’d assign to anyone we liked, though that’s true of pretty much any so-called five-passenger sedan in this class.

Back on the plus side of the score sheet, the seats are long-haul comfortable, and the perforated leather makes those hides of yesteryear seem antiquated.

As you’d expect, there is a comprehensive complement of contemporary safety features. 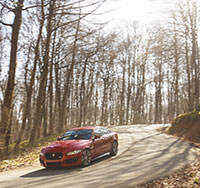 Jaguar staged the XE’s U.S. press introduction in and around Aspen, Colorado. Altitudes of the challenging mountain drive routes ranged from 8000 to 10,000 feet, high country indeed. Altitudes of that magnitude sap the power of internal combustion engines, particularly naturally aspirated engines. But the XE’s boosted engines, we logged seat time in both the supercharged V6 and turbocharged diesel, were vigorous in the Colorado highlands.

This was particularly true of the turbodiesel, with its formidable torque. And we were also impressed with its quiet operation: hardly a hint of compression ignition clatter.

The V6 will be the acceleration champ, of course. At sea level, we anticipate 0-to-60 sprints in the mid 4-second range, which is very quick by the standards of this class. It might be even quicker if the automatic transmission was a little more responsive.

In manual mode, using the shift paddles, up- and downshifts are prompt, though not as brisk as some of the dual clutch manumatics out there. But setting the gear selector dial in drive and operating in full automatic, kickdowns for passing punch are on the slow side.

Still, the XE’s power story is generally positive. But the area of operating traits that will win hearts and minds is dynamics; this baby can dance. The structure is exemplary in terms of rigidity, and with the adaptive dampers that go with the S model.

The tires deliver abundant adhesion, there’s hardly a hint of body roll, and the steering, both quick and almost telepathic, completes the circuit between car and driver. It’s a connection that’s powerful and gratifying, at a minimum on the same dynamic level as its German rivals, as well as the Cadillac ATS-V.

The Jaguar XE is an eager, responsive machine that provides a powerful sense of connection between car and driver. It embodies all the traits that separate sport sedans from more everyday four-doors. The practical attributes are there: comfort, competitive pricing, athletic good looks, handsome interior appointments, contemporary infotainment and safety features. But the element that makes this car stand out amid its rivals is what happens when it rolls into a set of turns. The XE may not have a German pedigree, but it has everything else to satisfy the discerning driver.

Tony Swan filed this report after his test drive of the new Jaguar XE near Aspen, Colorado.