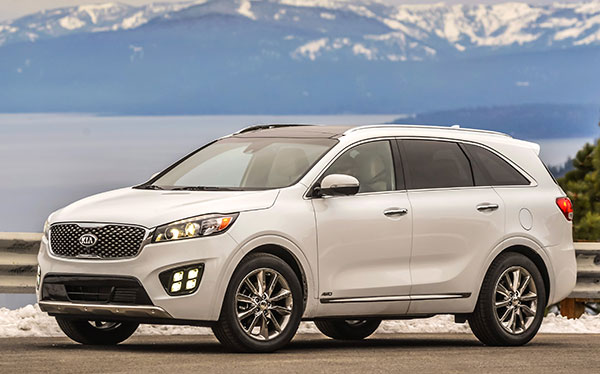 The Kia Sorento is a mid-size crossover with an available third-row seat to provide seating for seven, which puts it in a category of just a few vehicles. It was redesigned for the 2016 model year, increasing its wheelbase and length by about three inches to increase cabin space, making it a bit larger than the Honda CR-V and Toyota RAV4.

The redesign was total, including a new chassis with stiffer body structure, complete sheetmetal makeover, and new available turbo four-cylinder engine with direct injection. The ride got smoother and interior more sophisticated. The Sorento came out feeling more confident and solid, without gaining weight.

With 7.3 inches of ground clearance, the Sorento is good in deep snow or sand. Each of the powertrains is capable of towing, but the V6 is best, rated at 5000 pounds.

The Sorento earns top crash test results in all five categories from the IIHS, as well a five stars from the NHTSA. Standard safety equipment includes side airbags and active headrests in front, side as well as curtain airbags with rollover sensor. Extensive active safety features are available.

Korean carmakers are known for their ability to copy competitors, to steal the best ideas and designs, and the Sorento styling reflects that skill. It looks neat and elegant, in its family crossover tapestry. Its change is evolutionary, with familiar soft proportions.

Good aerodynamics belie the overall slight bluntness. The front and rear show maturity in the details, with character coming from the detailed grille, LED running lights, and narrow headlamps with prominent air intakes punctuated by foglamps.

The Sorento cabin has the feel of a luxury car, thanks to its refinement. The body structure, new for 2016, doubled the amount of high-strength steel, and you can hear it in the solid thunk of the closing of the doors, as well as the quiet ride.

The front seats are especially good. Kia cabin engineers have proudly stated they copied the seats of a Volvo. The seats leave your prosaic Toyota and Honda SUVs behind, and venture into the comfort zone of Jeep Grand Cherokee, BMW X5 and VW Touareg. In Sorento SX models, there’s extendable thigh support for tall drivers, and available height and tilt adjustment for the passenger.

The second-row seats are, we shall say, less than optimum. They’re low, short, firm, and not contoured: a basic bench. The Nissan Murano and Toyota Highlander back seats are far better. However there’s storage under the rear seats, and at least the bench allows the seatback neatly flip forward for access to the third row. Which is surprisingly good, considering that it’s a few inches shorter than the Highlander’s, and even more inches shorter than in the Ford Explorer or Dodge Durango. The Sorento’s third row works for short rides if you’re under six feet.

On the Sorento SX Limited the third row is power folding, by a button inside the liftgate. There’s also an available remote liftgate release that works with the key in your pocket or purse. But the storage space behind the third row is relatively small, maybe enough for three grocery bags.

The Sorento dashboard is attractive and functional, and wraps around between the front doors. It’s fairly low, making the gauges and instruments seem high, which means they’re easy to read and easy to reach. There is ample soft-touch trim, although it could be a bit more daring, and the quality of the interior materials is good. The climate, audio, and navigation controls have their own tidy control pods.

The panoramic moonroof that comes on SX models (optional on EX) is nice but brings down the headroom over the second row too much. If you have tall teens, you may not want it.

On the dyno the V6 is the most powerful engine, with 290 horsepower, but the new 240-horsepower turbocharged four feels perkier, probably because it has more torque, with 260 pound-feet versus the V6’s 252 pound-feet. The V6 does feel quicker in jackrabbit starts, and there’s some turbo lag with the 2.0T engine.

The 6-speed automatic transmission used by all three engines operates more abruptly with the V6, while the four-cylinders shifted more smoothly, if not all that precisely.

There’s a Sport mode, but it’s not particularly sporty. Sport, Comfort, and Eco modes adjust the Sorento’s transmission shift points and steering boost, but don’t affect the throttle response, which is quite sensitive.

The steering is good, with decent tracking on center. The feel of the brakes is also good, while the suspension provides a composed ride.

Sensors in the available all-wheel-drive system monitor the steering degree, yaw, and other forces not having to do with wheel slippage. It’s a sophisticated system that electronically determines in milliseconds which wheel or wheels get the power. There’s also available torque-vectoring that talks to the all-wheel drive when the road is slippery.

The Kia Sorento is a fine and versatile family crossover, with stylish looks and a refined cabin. It was all new for 2016. The price goes up with the good stuff, like seven-passenger seating, all-wheel drive, and the turbocharged four-cylinder engine, but it’s still a major contender in its class.

Sam Moses contributed to this report, with driving impressions by The Car Connection staff.