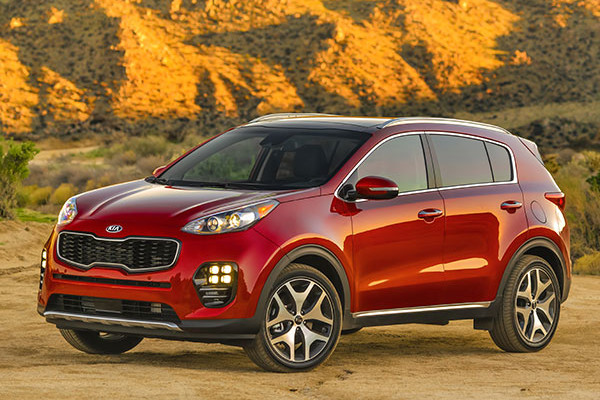 The all-new 2017 Kia Sportage enters its fourth generation with a major redesign that puts a little less emphasis on sport and a lot more emphasis on quality and comfort. Not to mention an intriguing new face.

When the Sportage made its debut, the compact crossover SUV field was thinly populated. That’s not the case today. The segment is chock-a-block, with over a dozen entries, all with virtues. Getting a new vehicle to stand out from the crowd is a challenge.

What’s the right recipe? Uninhibited styling? Athletic dynamics? Leader-of-the-pack performance? The previous generation projected a sporty image, fortifying it with a lively turbo engine option and suspension tuning that some judged to be a little too stiff.

The 2017 Sportage takes a different approach, emphasizing elements that almost always pay off in the showroom: quality interior furnishings, plenty of room, creamy ride, quiet operation, safety features in step with the times, and a good value story.

In addition to moving suspension tuning toward the comfort side of the ledger, Kia has dialed back on power. Displacement of the two engine choices is unchanged: a naturally aspirated 2.4-liter and a turbocharged 2.0-liter. Both engines are direct-injection four-cylinders, and both have received engineering attention to enhance efficiency.

At 181 horsepower and 175 pound-feet of torque, output of the 2.4-liter four-cylinder is about the same as that of the 2016 version. However, the turbo’s ratings drop from 260 hp and 269 lb-ft to 240 and 260, respectively. Both engines are paired with a 6-speed automatic transmission.

Kia cites an impressive 39 percent improvement in structural rigidity. But the Sportage has gained substantially at the scales, with curb weights running up to the two-ton frontier for the line-topping SX Turbo with all-wheel drive.

Compact is a word that keeps embracing bigger vehicles in the world of crossover SUVs, and the latest Sportage is in step with the trend. The wheelbase has been extended 1.2 inches, to 105.1; overall length stretches from 174.8 to 176.4; width expands by almost a half-inch, to 73.4.

Predictably, this adds up to a little more room inside, particularly welcome for passengers in the outboard rear seats, who can ride comfortably with only minimal cooperation from those up front. (Like all compact CUVs, the rear center seat is suitable only for child seats, very small adults, or passengers who would be more welcome somewhere else.)

However, the cargo volume can be increased slightly with a new provision that allows users to drop and move the rear load floor down about three inches. Also, the rear seats have been redesigned to fold flatter, making it a little easier to stow big stuff. A new auto-opening power rear hatch helps, too; it responds to the keyfob after a short interval when the owner stands nearby.

Styling: The going away view might be better without the red reflective strip that spans the rear hatch, connecting the taillights. But the head-turning details are on the new front end, with its array of seemingly random styling elements, particularly the running lights set low in the fenders.

Kia calls them ice cubes, and they’re certainly distinctive. We should note that the ice cube LED lights are limited to the SX Turbo.

The overall design treatment, developed in Germany, hasn’t won the hearts of many critics, but of course they’re not the market. Kia product planners note that it’s increasingly difficult to stand out in the crowded compact CUV field, which essentially liberated the designers from a me-too approach.

Whatever else one may say about the face of the new Sportage, me-too does not apply.

Naturally, interior appointments contribute to the comfort quotient, and the Sportage gets very good marks on this portion of the scorecard. Materials wouldn’t be out of place in a vehicle costing half again as much, there’s hardly a hard surface anywhere, and sporty perforated leather seats, with heating and cooling, make the going more pleasant (although these are limited to the SX Turbo).

The leather-wrapped heated steering wheel (also limited to the SX Turbo) and shifter add lux to the interior. Asterisk: the wheel’s flat bottom, suggesting sportiness, is a little over the top. Flat-bottom wheels are necessary in sports and racing cars, allowing driver thigh clearance. That’s not an issue here, and the wheel’s D shape is strictly cosmetic.

Control functions are easy to identify, and for those who find total touch screen secondary controls irritating the display is augmented by a collection of switches, buttons, and knobs. No mysteries. The 8-inch screen, for its part, is home for a nav system that’s more cooperative than many, and is angled slightly toward the driver.

For sun worshippers, a vast new sunroof is available, opening most of the top to fresh air and solar rays, and it’s a tribute to the design staff that the body shell has actually been stiffened with so much structure missing up top.

The new Sportage features updated telematics, infotainment, and connectivity. Tops on that list is the availability of Apple Car Play and/or Android Auto. Kia also offers the third generation of its UVO system, and a Harman/Kardon 320-watt 8-speaker audio system with 8 gigs of storage.

The combination of more mass and fewer ponies is an unlikely formula for improving 0-to-60 mph performance. Kia addressed this issue in the Sportage SX by installing a new turbocharger that reaches maximum boost faster, summoning maximum torque more quickly.

The solution seems to get the new Sportage SX across the intersection smartly when the light turns green, a key element in everyday driving. But as speed builds, the effect diminishes: the engine begins to feel that it’s running out of breath, and passing on two-lane highways is something to be approached with care, in anticipation of lengthy exposure times.

Agility-wise, the character of the new Sportage seems to differ from its immediate ancestor. As noted, the generation three SX Turbo drew some criticism for a rather unforgiving ride on patchy pavement. The gen four Sportage features a more compliant setup.

The Sportage SX Turbo models with front-wheel drive and all-wheel drive that we have driven felt exceptionally solid, a tribute to that stiffened structure. Both were smooth operators on the rare stretches of rough going we encountered on mountain roads east of San Diego, and both absorbed freeway expansion joints and truck ruts commendably.

However, neither version exhibited much enthusiasm for decreasing radius turns, switchbacks, or quick transients. Body roll isn’t extravagant, but transient response is unhurried, particularly with all-wheel drive, which is substantially, and noticeably, heavier.

The electric power steering has been revised, and is reasonably quick (2.8 turns) and nicely weighted at highway speed, though still lacking a bit in terms of tactile feedback, something it shares with many systems.

Transmission performance is adequate in full automatic mode, although there’s a little more up-and-down hunting in hilly going. Responses to commands from the shift paddles are about average, but the transmission seems to want to upshift automatically when demand for power diminishes, regardless of operating mode (Normal, Sport, or Eco).

SX Turbos are equipped with 19-inch wheels (lesser trims have 17- and 18-inchers). The bigger diameter should add up to improved grip. Larger wheels often have a negative impact on ride quality, but we found the Sportage with 19-inch wheels to be supple on all surfaces.

Overall The dynamic bottom line seems to be a Sportage that’s not quite as quick on its feet. But it’s comfortable, quiet, and composed, a trio of traits that are hard to dislike.

The new 2017 Kia Sportage raises the ante in terms of quality and comfort. It’s not as quick and agile as some. If your priority is sporty handling, you might prefer the Ford Escape, Mazda CX-5, or VW Tiguan. But the Sportage is a satisfying ride in other scoring areas, civilized and quiet, structurally solid, with a strong value proposition. Styling of the SX Turbo, with its ice cube fog lights, may be a little too uninhibited for some. On the other hand, uninhibited styling hasn’t been a problem for the Kia Soul.