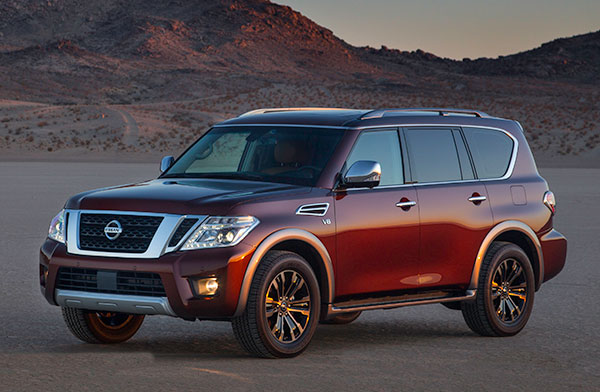 Thanks to King Phillip II of Spain, Armada is a word that’s had massive nautical connotations ever since 1588.

However, at Nissan the word is strictly land-based, though the term massive still applies. Armada is a big sport-utility vehicle, with three rows of seats and plenty of V8 power. It dates to 2003, not quite as far back as the Spanish Armada, but a long time in the world of motor vehicles. And this is its first major makeover.

For 2017, the Armada name persists, but it surrounds an all-new vehicle. The engine seems familiar, but the foundations are new, new, that is, to the Armada. The original Nissan Armada rode the same chassis as the Titan full-size pickup. But the 2017 Nissan Armada redesign is based on the Nissan Patrol, a rugged SUV that’s been trekking the wilds in other markets since 1951.

We should also add that the transition to Patrol foundations is not without precedent for the greater Nissan North America family. The Infiniti QX80 made the switch five years earlier.

The grille is the most obvious difference between the 2017 Armada and previous models, but the sheet-metal is all-new. The 2017 Armada is slightly longer and wider than before, though it’s wheelbase is shorter. The all-new chassis is more rigid than previously.

The new cabin is attractive and soft-touch surfaces abound, and the Armada is quiet underway.

It has nice road manners, striking an appropriate balance between ride quality and handling, by large SUV standards. And it’s capable over rugged terrain and primitive roads.

The 2017 Armada accelerates briskly and sounds good. It has quick throttle response and impressive passing power. Its 5.6-liter V8 has been re-engineered for 2017 with Nissan’s latest variable-valve technology and delivers dramatically increased horsepower: 390 horsepower and 394 pound-feet of torque. This while continuing to run on Regular gasoline. Fuel economy is an EPA-estimated 13/18 mpg City/Highway. Towing capacity is increased to 8500 pounds.

The most readily discernible difference between the new Armada and its predecessor is up front, where the grille repeats the new V-motion theme of other Nissan SUVs. Low-beam LED headlights are standard on all models; the side mirrors are equipped with turn signal repeaters; standard wheels are 18 inches, 20 inches on upgrade models; and the rear hatch is power-operated.

Beyond that, the 2017 Armada may seem to bear a strong resemblance to its predecessor, but the skin is all new, as are the dimensions. The wheelbase (121.1 inches) is 2.1 inches shorter than the first generation, but the new Armada is otherwise generally bigger: 1.2 inches longer at 208.9 inches and just over a half-inch wider, albeit 2.0 inches lower from rocker panels to roof. Nissan claims the increased length is 4.9 inches longer than that of its biggest competitor, paying off in a roomy interior.

There’s increased chassis rigidity to go with the increased dimensions. The transition to Patrol foundations includes much heavier frame rails and a 22 percent improvement in structural rigidity, according to Nissan.

Increased dimensions and the robust frame rails add up to a corresponding curb weight increase of about 300 pounds versus corresponding models from the outgoing Armada lineup according to Nissan.

That’s a hefty increase, but it’s offset by an even heftier increase in engine output. Although the displacement of the Armada’s V8 is familiar at 5.6 liters, the engine has been extensively re-engineered, including Nissan’s latest variable valve lift and timing system, a higher (11.2:1) compression ratio, and the addition of direct fuel injection. The net is 390 horsepower and 394 pound-feet of torque, up from 317 and 385, respectively, on Regular gasoline.

The updated engine is paired with a new 7-speed automatic transmission, and as before four-wheel drive is an option with all trim levels.

Fuel economy, never a strong suit of these big utilities, is EPA rated 14/19 mpg City/Highway for the rear-drive Armada, 13/18 mpg with four-wheel drive.

On the plus side, there’s an increase in towing capacity, to 8500 pounds, to go with the more potent engine and new transmission. A class IV trailer hitch is standard.

The 2017 Armada is attractively appointed inside and comes with an attractive array of standard features. Infotainment and connectivity are up to the minute, thanks to the Nissan Connect system, standard with the Platinum trim, available on the SV and SL models. Also worth noting: Nissan augments its touch screen controls with an array of switches and knobs, a comfort to those who are put off by the trend to knobless dashboards.

There are almost no hard plastic surfaces inside, soft touch abounds, and there’s a luxury feel to this interior, even in the base Armada SV.

The Armada’s big horsepower increase is tempered to some degree by a substantial increase at the scales, about 300 pounds model to model.

A weight increase of that magnitude can’t be taken lightly, but the increase in engine output from the 5.6-liter V8 is more than sufficient to give the new Armada a significant edge in power-to-weight compared to its predecessor. This shows up as right-now throttle response, brisk acceleration when red lights go green, and impressive passing power on two-lane highways, accompanied by a subdued but melodious baritone exhaust note.

Any vehicle weighing close to three tons isn’t likely to be particularly handy in quick maneuvers, and the Armada is no exception. On the other hand, in the course of a half-day drive the Armada established itself as more willing than most of its contemporaries to make rapid maneuvers, with modest body motions and prompt recovery in hurried transitions from extreme left to extreme right.

The chassis engineers have done a commendable job of tuning the Armada’s all-independent suspension (double wishbones and coil springs front and rear) to strike a nice balance between respectable dynamic responses and supple ride quality. Also, interior noise levels are exceptionally low at all speeds.

Also worth noting: the Armada seems to be surprisingly capable in rugged off-road situations. This observation is based on a very brief demo with a four-wheel-drive Armada on a simulated course with extreme off-camber banking, steep ups and downs, and marginal traction. The long wheelbase that goes with a big SUV is the wrong prescription for roadless work, but the Armada’s 9.1 inches of ground clearance makes it more useful than most full-size utes for driving in the rough.

Braking performance is difficult to assess without a test track and instrumented data, but the Armada’s system is scaled to its task (13.8-inch vented discs all around), and the pedal responds well to modulation by the driver.

If there’s a soft suit in the Armada’s dynamic resume it’s a power steering system that’s a little slow (3.5 turns lock to lock) and a little numb on-center. However, tactility improves with speed, as system effort increases.

The 2017 Nissan Armada does everything well, has lovely road manners, and is elegantly turned out inside. In its Titan-based manifestation, it was a minor league player in the full-size utility game, with a market share of less than 5 percent. The new 2017 generation has what it takes to graduate from the minors and become a real contender.