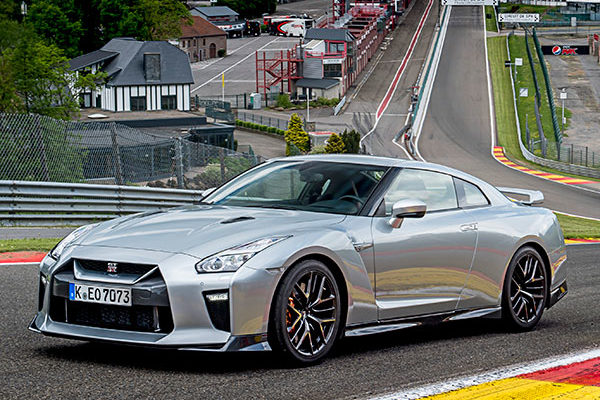 When Godzilla rose out of Japan a decade ago, it was a raw beast, but no more. Well, it’s actually more of a beast, if you define beast by power; but today the ride is smoother, the steering easier, and interior quieter. And the latest model is the best ever. For 2017, Godzilla gets new styling, new infotainment, new interior, and all-around new refinement.

The 2017 Nissan GT-R benefits from another 20 horsepower, bringing total output to 565 hp, along with four pound-feet of additional torque, making 467 lb-ft. Changes to the ignition timing and turbo boost make the power. Nissan says the 2017 GT-R accelerates stronger above 3200 rpm.

The predictable handling and livable ride are a result of its rigidity, springs, and special Bilstein DampTronic dampers. The all-wheel-drive system is biased to the rear, but can send 50 percent of the torque to the front wheels. It uses a fast dual-clutch transmission. There are several driving modes, including R for Race.

Like the Porsche 911, the GT-R actually seats four people, even if the two in the rear have to be small, or scrunched down. If you need a sports car that seats four adults, you’d have to go for a car like the Maserati GranTurismo.

Being a rare supercar, the GT-R hasn’t been crash tested by the federal government or the IIHS. Its electronic stability control has several levels, from conservative in the wet to full off, for the track. The main thing, if you make the right setting choices, it will help you.

For 2017, the GT-R also gets a new color: Blaze Metallic Orange. Just in case you missed it the first time.

The Nissan GT-R Premium ($111,585) is the standard model. A base model with fewer features is planned, along with a Nismo model that makes fewer compromises for comfort (such as no rear seat) and adds some things for the track.

The GT-R doesn’t look like a supercar. You can tell it’s special, but it doesn’t announce its supercar status. With its jagged and bulky luxury coupe outline, it could be mistaken for a kit car, with anime armor: boisterous fender flares, deeply scooped air intakes, and a comically large rear wing. Not to mention the roofline’s tomahawk slice that chops into the rear end.

Cars like the Porsche, Mercedes, and Ferrari or Lamborghini are unmistakable. The GT-R is overlookable.

For 2017, the styling changes include a new Nissan V-Motion grille with a different mesh pattern and matte finish; it’s also larger, for better cooling. A revised chin spoiler and bumper add downforce, while the hood is made sturdier and tweaked with pronounced character lines. The 20-inch wheels are a new 15-spoke design.

The beltline has been raised and the rockers widened for better aerodynamics. The rear end gets functional vents next to the quad exhaust outlets and under the bumper that’s taken from the 2015 Nismo, for better airflow at high speed. Nissan says the changes make the GT-R more stable at high speed, while keeping the 0.26 coefficient of drag.

There is an Infiniti level of refinement in the Nissan GT-R cabin. The instrument panel on the new horizontal dashboard is wrapped in Nappa leather, and features 16 fewer buttons than before, down to 11 from a bewildering 27. The center touchscreen grows from seven inches to eight, a Display Command controller is added to the center console, the NissanConnect system with navigation and access to mobile apps is now standard.

The new lighter seats have good comfort and support. The shift paddles are moved from the steering column to the steering wheel where they’re easier to use in the turns.

There’s good room in the front, and the rear seat is fine for two kids; for adults back there, headroom is a bigger issue than legroom. There’s also good trunk space. A rearview camera is standard, and necessary, as the thick rear pillars block the rearward visibility.

The 2017 cabin is a huge 10 decibels quieter, according to Nissan, thanks to more sound deadening material and an acoustic glass windshield, along with the existing noise cancellation system. But you can still hear the high-strung engine, thanks to a new titanium exhaust system. The twin turbos create a jet-like whine mixed with a low howl.

The GT-R is so fast that the driving experience can feel like a video game, except with consequences when you cross the line. In the real world, this Nissan can outrun supercars costing twice as much. It’s quicker to 60 than most cars this side of a Bugatti Veyron, and it has a reported top speed of 196.

It’s a brilliant road car as well as an awesome track-day car. The firm ride is more forgiving for 2017, especially in Comfort mode. Shifting is quick and crisp. Steering is relatively light at low speeds, without the need to make small corrections at highway speeds.

It’s a nice highway cruiser: Switch to the comfort settings, shift into sixth, relax and listen to the two turbochargers whistle. The exhaust is relatively quiet, not the expected boy-racer growl, instead it’s a subtle rumble. It doesn’t have the refined scream of a 458 Italia or the deep burble of a Shelby GT500. It’s between these and quieter. Wind noise is present, but not too intrusive.

The GT-R has adjustable suspension, transmission, and stability-control settings to make it work as a commuter car. But in R for Race mode, it’s life-changing experience. You push the GT-R into long corners at triple-digit speeds, and feel almost relaxed as it handles the curve without effort. When it’s time to slow down for a hairpin, the big Brembo brakes, six pistons in front and four in rear, will do the job.

The traction control is easy to use. Set all three to Race, depress the brake pedal, floor the accelerator, and the engine hovers at 4500 rpm. Release the brake and the car launches with a slight squeal of the tires. Power is distributed to the tires with the best grip.

Pushed to its handling limits on a racetrack, the GT-R tends to understeer, a trait we noticed at Mazda Raceway Laguna Seca. With the throttle down, the rear can slide into power oversteer but it’s controllable. Cornering grip is outstanding.

The huge brakes feel firm as they slow the car at a mesmerizing rate, and we did not experience fade during repeated hard use.

The Nissan GT-R is a big winner in the performance-for-dollar index; only the Corvette ZO6 can challenge it. It is staggeringly quick and grips the road like a racecar. For 2017, it ups its refinement game. It’s a shame it’s not more eye-catching.

Sam Moses contributed to this review, with staff reports by The Car Connection.