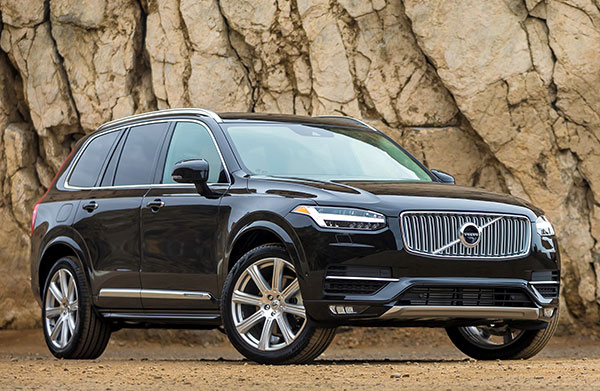 Totally redesigned for the 2016 model year, the Volvo XC90, helped redefine the Volvo brand, now that the Swedish automaker is Chinese-owned. Worries that innovation would be sucked out of the brand leaving an empty shell appear to have been unwarranted as Volvo is continuing to produce cutting-edge vehicles.

The 2017 Volvo XC90 gets some expanded safety options. Also, the 2017 XC90 T5 model is now offered with either front-wheel drive or all-wheel drive. All other XC90 models come standard with all-wheel drive.

The brand’s biggest luxury SUV offers seating for seven, five, or four, depending on seating configuration.

Three distinct powertrains are available, all with a 2.0-liter four-cylinder engine and 8-speed automatic transmission.

In the base XC90 T5, the engine is turbocharged, making 250 horsepower and 258 pound-feet of torque.

A turbocharged and supercharged version, in the XC90 T6, develops 316 horsepower and 295 pound-feet.

Volvo also offers a XC90 T8 Twin Engine plug-in hybrid, with the T6 engine getting additional boost from a 60-kilowatt (87-hp) electric motor mounted at the rear. With total output of 400 horsepower, the XC90 T8 can run on the gasoline engine, on electricity alone, or both.

Five Drive Mode selections are available: Comfort, Eco, Dynamic, Individual, and Off-road. The T8 has a different set. Driver-adjustable power steering is standard. Stop/Start technology, that annoying feature that shuts off the engine at intersections, is standard.

Adopting a theme that might be called subdued sophistication, the XC90 focuses on comfort and efficiency, as well as tasteful style. Designed with a restrained hand, the XC90 subtly exudes quiet elegance outside, while the interior spells luxury. The interior is premium, if not true luxury. Safety is the top priority here and where much of the premium price is focused.

In keeping with the brand’s long-standing reputation for safety, Volvo gives the XC90 the latest safety features and systems, active as well as passive, some optional. Automatic braking at intersections has been added to the standard City Safety package. Pedestrian and cyclist detection now functions day or night.

Park Assist Pilot now lets the XC90 park itself in either parallel or perpendicular spaces. A road sign information system displays the speed limit. Rear collision warning can flash taillights if a vehicle behind is approaching too rapidly. A Run Off Road system tries to protect passengers if the XC90 crosses the road’s edge.

The 2017 Volvo XC90 offers three powertrains, T5, T6, T8, each in two or three trim levels. (Prices are MSRP and do not include destination charge.)

The XC90 presents a fresh approach to Volvo’s long-standing traditions. Visually contemporary and timeless, the body is serenely elegant and wholly unpretentious, nearly the opposite of some flashier competitors. Classic SUV design is evident, but integrated with aerodynamic contours and crisp lines.

As a bonus, the XC90 doesn’t appear to be as large as other seven-passenger SUVs. Generous expanses of glass help to draw the eye away from the tall bedsides, which are inevitable in larger SUVs. The windshield is only moderately slanted. Front overhang is shorter than that of some notable rivals.

Spacious for up to seven occupants, the XC90 cabin veers away from the norm, as seen in Japanese or German brands. Few, if any, competitors have managed to merge judicious design with lush detail work, in so adept a manner.

Carefully stitched leather upholstery melds with textured metal and optional matte wood, conveying a hint of soothing Scandinavian furniture. Seats promise sublime comfort, with those in front adjusting in a variety of angles. Second-row seats can slide fore and aft.

Two adults can fit in the third row, though leg space might be limited.

Because each row is a tad taller than the one ahead, everyone gets a good view, helped by big side windows. The standard panoramic sunroof can provide an additional shower of light.

On the dashboard, the Sensus 9.0-inch touchscreen is quite intuitive, easy to use, and promptly responsive. Controls feel crisply confident, and graphics are readily legible.

Road noise and wind sounds are largely stifled, helping to convey a sense of calmness. Bigger wheels emit more noise than the standard 18-inchers. Not everything is ideal. Only one USB port is available, while sunvisors are oddly basic.

With all seats upright, cargo volume totals 15.8 cubic feet. Fold the third row flat, and space grows to 41.8 cubic feet; then to 85.7, if second-row seatbacks are down.

On the highway, the sizable XC90 handles, steers and stops much like a passenger car, clinging predictably to the pavement. Electric power steering provides helpful, natural feedback. Only if taking a corner quickly does body roll become noticeable. In addition to its ample dimensions, the XC90 has a 9.3-inch ground clearance.

Though small in displacement, engines respond with spirit; T6 and T8 powertrains are especially enjoyable. Such peppiness, combined with carlike control, helps make the XC90 feel nearly nimble for a vehicle of its size. From a standstill, the T8 is clearly quicker, especially in Power mode; but the T6 isn’t likely to disappoint. The T6’s supercharger helps the engine respond briskly at low rpm, until the turbocharger can deliver boost.

Noise can be an issue, but only on specific pavement surfaces, or when accelerating hard. T5 and T6 models include a Stop/Start function, shutting the engine off when stopped at intersections. When ready to resume, the engine starts quickly and smoothly.

Volvo’s T8 Twin Engine plug-in hybrid can travel up to 13 miles on the battery alone, with a Combined rating of 25 mpg when operating as a hybrid. The EPA rates equivalent efficiency relatively low, at 54 MPGe.

A subtly understated body encloses a tastefully elegant, highly ergonomic, premium-level family utility vehicle with seating for up to seven. Assembly quality is solid, as expected from Volvo. Even base models are equipped well, and options are logically organized. Its infotainment system is among the most intuitive.