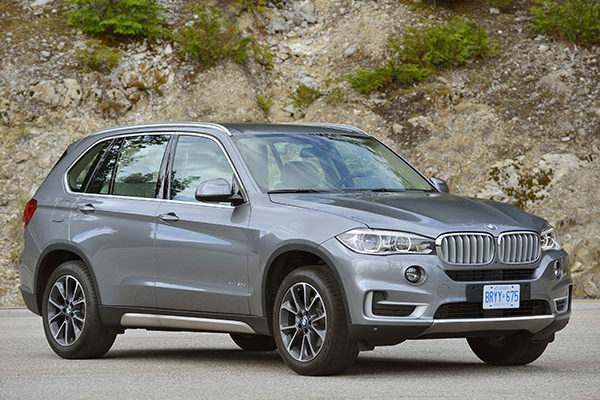 The BMW X5 midsize crossover SUV is able to seat seven and features the taut driving dynamics that symbolize the brand. The X5 was last redesigned for the 2014 model year. Little has changed for 2018.

Most 2018 BMW X5 models get a sport-tuned version of the 8-speed automatic transmission. Option groups have been altered, essentially serving as separate trim levels. Most individual options are available with the Premium package.

A 3.0-liter turbodiesel six goes into the X5 xDrive35d, developing 255 horsepower and 413 pound-feet of torque. All-wheel drive is standard.

All X5s use an 8-speed automatic transmission. Rear-wheel drive is standard on the base gas-engine model, but upper trim levels come with all-wheel drive. AWD is optional for the base version.

For all-out performance, the X5 M unleashes a 567-horsepower version of the 4.4-liter V8, producing 553 pound-feet of torque. Sport seats, strengthened steering, and a track-tuned suspension are standard.

An optional Parking Assistant can position the X5 in a parallel or perpendicular parking spot. Traffic Jam Assistant strives to keep the crossover in its lane, safely behind the vehicle ahead.

Undeniably upscale, the X5 might fall short in automotive personality, due to relatively bland styling. Any appearance deficits tend to be offset by the X5’s refined and spacious cabin, as well as its powertrain and handling capabilities.

Conspicuous up front is BMW’s twin kidney grille. Subtle creases highlight the bodysides. The two-piece, power-operated tailgate can serve as a temporary seat when parked for an outdoor event. Although it may hamper loading of larger items, it also prevents cargo from falling out when the rear hatch is opened.

BMW’s conservative design principles apply to the X5’s cabin as well as its body. Not only is the interior warmly appealing, it provides abundant space for five adult occupants.

Controls are arranged in a straightforward layout, easy to reach. The driver faces a hefty, triple-spoke steering wheel.

Front seats provide ample support. Multi-contoured seats are the most inviting. Second-row seats promise satisfying space as well as an excellent view, due to the X5’s low beltline.

Infotainment centers on a 10.2-inch touchscreen and BMW’s newest, excellent version of iDrive, using a touchpad and control knob. Apple CarPlay is available.

Depending on model, driving an X5 can be surprisingly pleasurable, augmented by a softly comfortable ride: BMW offers several suspension possibilities. Softest-riding is the base model, which could wallow when cornering at higher speed.

Despite weighing about 4,700 pounds, the base X5 can accelerate to 60 mph in a bit more than six seconds. Not only is the six-cylinder gas engine smooth, its strong power delivery begins as soon as the gas pedal is touched. As expected, the quiet V8 version is notably quicker.

Diesel X5s might be in short supply, but the xDrive35d is powerful and refined, as well as fuel-efficient. A larger price premium ($4,250) applies to the xDrive40e hybrid. When fully charged, it can go 14 miles on electric power alone. In automatic mode, the gas engine usually remains off at speeds below 45 mph.

For substantially greater stability when cornering, plus confidence on curvy roads, an adaptive suspension is optional. An M Sport package firms up the suspension and enhances control further yet.

Naturally, 567-horsepower X5 M is the choice for full-bore performance, coupling race-track potential with capability for daily driving. Brakes are heartier, and the suspension firmer yet.

An X5 might look ready for off-road treks, but that’s not its main mission. All-wheel drive (xDrive) works nicely on snow-covered roads and milder journeys past the pavement.

The hybrid xDrive40e has been EPA-rated at 24 mpg combined, but 56 MPGe (equivalent), based on the amount of energy required to supply the electricity.

The xDrive50i’s V8 guzzles, EPA-rated at 15/21 mpg City/Highway, or 17 mpg Combined. Even thirstier is the X5 M, rated at just 14/19/16 mpg. Each X5 has stop/start, which can shut off the engine at stoplights. Early BMW start/stop operation could be annoying, but the current version is less noticeable than some similar systems.