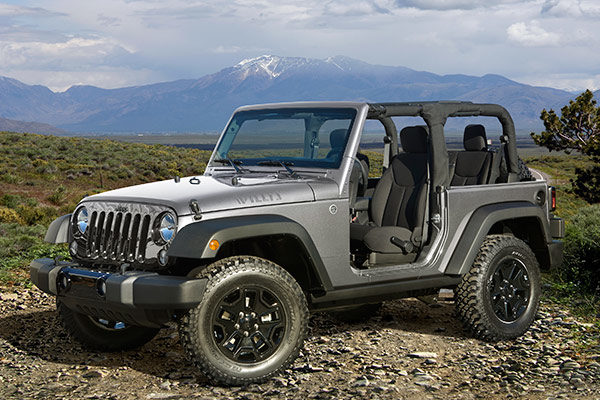 The Jeep Wrangler is all-new for 2018, slightly larger, roomier, more refined, yet with improved off-road capability. The 2018 Wrangler comes in two-door and four-door Unlimited models.

Jeep is a brand name that has been expanded to cover five (soon to be six) different nameplates, but for serious off-road enthusiasts only one vehicle really merits that hallowed badge and this is it. Though it’s been refined and mechanically enhanced over the decades, the Jeep Wrangler continues to embody the rugged go-anywhere can-do spirit of the original, a vehicle General George C. Marshall characterized as America’s greatest contribution to World War II. (Greatest technical contribution, that is. General Marshall did not discount the millions of men and women who served in the armed forces from 1941 through 1945.)

How much does the latest Wrangler resemble the ones that rolled ashore at Normandy in 1944? Well, there are those seven vertical grille vents, which have persisted over the decades with all Jeeps, great and small. And like the Willys original, the Wrangler is a body-on-frame design: the body joins the chassis late in the assembly process.

No other Jeep meets that description. All are unitbodies, i.e., the body shell and frame rails are unitized. The same applies to all Jeep competitors. The advantage of unitbody construction is higher chassis rigidity and lower curb weight.

The advantage of body-on-frame is its ability to take a beating in rough going. Which is what this Jeep is all about.

Without a side-by-side comparison, previous generation and new, it would take a real Jeep expert to see the difference. Not surprising. The Wrangler is a sacred property, revered by many thousands of owners, and the design team trifles with its basics at their peril. Remember the firestorm that greeted the square headlights of the 1986 model?

But there are many differences. For one, this is a slightly bigger Wrangler on a longer, sturdier wheelbase. And while bigger, it’s also fractionally lighter. A new 2.0-liter turbocharged gasoline engine option. Increased off-road capability. More ground clearance for the Rubicon model. More interior room. More comfort. Enhanced infotainment and connectivity.

And an irony. While the two-door Wrangler continues to be the most iconic of all Jeeps, with the closest ties to the WW II, the four-door version is the best seller, to the tune of 80 to 85 percent of Wrangler sales.

As noted, to a casual observer, the new Wrangler is all but indistinguishable from its predecessor. But there are many, and to Jeep cognoscenti some, at least, will be immediately apparent.

For example, not only is the new windshield easier to remove, its angle is less upright, improving the Wrangler’s aerodynamics. That seven-slot grille is more upright in its lower two-thirds, then cants rearward in the upper third. The headlights are closer to the grille The tailgate-mounted spare tire mount is a little lower, and the rearview camera sits at the center of the mount.

Also, though not visible to the naked eye, the tailgate is composed of magnesium, with an aluminum skin, part of the Wrangler’s weight reduction. Similarly, the hood, doors, and fenders are aluminum.

The soft top on the classic two-door is easier to remove, and the soft top version of the four-door Sahara is power operable, a Wrangler first.

Comfort isn’t the first word that comes to mind with a vehicle such as the Wrangler, but it’s an attribute that’s an appreciated part of the new Wrangler’s persona. It’s partly attributable to increased room, particularly in the rear seat, partly to improved materials. Interior noise levels are surprisingly civilized on paved roads, and of course there’s up-to-date infotainment and connectivity with Chrysler’s Uconnect system and available 8.4-inch touch screen.

The latest Wrangler has no luxury pretenses, but the product planners reason that rugged off-road creds and contemporary comfort aren’t mutually exclusive concepts.

The new automatic is optional with the V6 engine; an equally new Aisin six-speed manual is standard.

As noted, a new turbocharged eTorque 2.0-liter four joins the Wrangler powertrain inventory. Rated for 270 hp and 295 lb-ft, the new turbo four also has an motor generator that provides an electric assist feature, making it a sort of mild hybrid.

The new eTorque 2.0-liter will be paired only with the eight-speed automatic.

The most surprising element of the new Wrangler’s public road performance is smooth ride quality. This is true on pavement, and, more impressively, on graded dirt with stretches of nasty washboard.

Similarly, the cabin is reasonably quiet in most situations, although some wind noise begins to intrude at freeway speeds. Design enhancements may improve the Wrangler’s progress through the air, but aerodynamic efficiency it not this vehicle’s strong suit. It’s still essentially a brick, and still punches a good-sized hole in the air.

Other small demerits: acceleration with the V6 engine is unhurried; weight reduction notwithstanding, the new Wrangler is still pretty chunky for a vehicle of its size. The two-door is just 166.8 inches long, the four-door is 188.4, but curb weights range from just under two tons to over 4300 pounds, according to Jeep.

The 2.0-liter turbo’s abundant torque yields a little more off-the-line enthusiasm, but acceleration nosebleeds are not a Wrangler concern.

On the plus side, the eight-speed automatic is a smooth operator. And Wrangler faithful will be pleased that this rugged individualist retains a manual transmission option.

Good marks on regular roads, which is where a lot of Wranglers spend most of their time.

But where the Wrangler continues to upstage every other vehicle with off-road pretensions is, yes, off road. Part of the experience at the Wrangler press introduction, near Tucson, included driving a Wrangler Rubicon up a slope consisting of small to medium-size boulders that didn’t even vaguely resemble a trail.

It was a slope that would have been difficult to climb on foot. But Like the Little Engine that Could, the Wrangler chuffed and snorted and marched up the hill, skid plates scraping, occasionally teetering on two wheels, sometimes with just one wheel delivering traction.

This is the environment that makes the Wrangler special.

There are Wranglers that never leave pavement, and of all the Jeeps this one makes an automotive fashion statement that’s hard to ignore. But where it excels is where the pavement ends. There are Land Rovers that can tackle the rough stuff, but for the money the Wrangler has no peers.