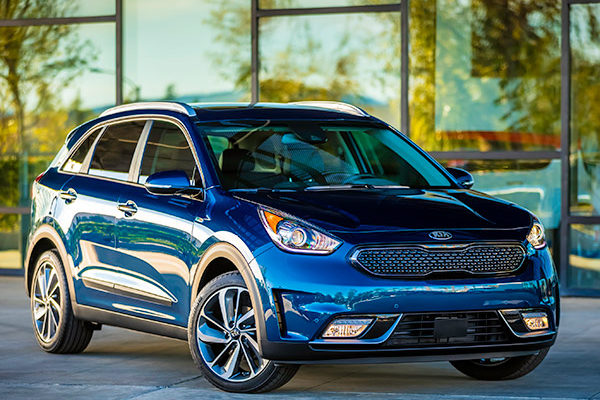 The Kia Niro was introduced as a new vehicle for 2017, a compact gas-electric hybrid wagon. For 2018, a plug-in hybrid version has been added. All come with front-wheel drive. All-wheel drive is not available. Its closest rival might be the Toyota Prius v, although the v has a larger cargo capacity.

The 2018 Kia Niro Plug-In Hybrid is EPA-rated at 46 miles per gallon Combined, or 105 MPGe when running electrically. It has a range of 26 miles on electric power alone, in warm weather; we got enough seat time to confirm this.

The conventional hybrid version, the kind that you do not (and cannot) plug in, is rated 50 mpg Combined for a stripped FE model (with less power-using equipment) or 43 mpg for a well-equipped Niro Touring model. Those figures are in Eco mode, which brings acceleration performance down quite a lot.

Both the plug-in hybrid and non-plug-in hybrid versions use a 1.6-liter four-cylinder engine with direct injection, tuned for the highly efficient Atkinson cycle. It makes 104 horsepower, with an electric motor squeezed between the engine and the 6-speed direct-shift automatic transmission, bringing the combined horsepower to a functional 139, with a strong 195 pound-feet of torque. The plug-in model has the more powerful electric motor, at 45 kilowatts (60 hp), as opposed to the 32-kw (43-hp) motor in the regular hybrid.

Kia’s system only uses one electric motor, unlike the smoother dual-motor systems used by Toyota, Honda, GM and Ford.

The small platform of the Niro is shared with the Hyundai Ioniq hatchback. The low and wide stance, five-door body, and vertical liftgate make it feel like a wagon. It drives nicely and handles well, thanks to light weight and a low center of gravity. It feels sportier than the Toyota Prius.

It’s practical as well as economical. The styling, cabin and features are attractive. It’s quiet in the cabin, and there’s good room for passengers and cargo.

The Kia Niro Plug-In Hybrid, also referred to as the Niro PHEV, comes in LX ($27,900), EX ($31,500), and EX Premium ($34,500) trim levels. The plug-in has a locking charge port, so the car can’t be unplugged while at a public charging station; a charge-timing function to take advantage of lower overnight electric rates; and a portable charging cord. It qualifies for a (-$4543) federal income tax credit the year it’s purchased, assuming the buyer’s tax situation permits the full credit to be used. It also earns state purchase rebates in New York (-$2000), California (-$1500), and other states, plus regional and corporate incentives.

Kia calls the Niro a crossover because it looks like a crossover. It feels more substantial than a compact hatch. It has big wheel arches with black flares, a thick cowl, rocker-panel cladding, roof rails, and a rear skid plate that makes it resemble a Jeep Cherokee from the rear. There’s no obvious styling effort to mark it as a hybrid, no visible attempt to look aerodynamic or eco. But in fact the Niro is very aerodynamic, with the drag coefficient being a low 0.29.

The low nose and wide sweeping hood conceal a long front overhang. It’s lower than the Kia Sportage crossover, while its lines are smoother and rounder than those on the Kia Soul.

The quality of the cabin materials is good, and the surfaces are soft. The instrumentation is simple and basic, with big white-on-black gauges, and glossy black trim on higher models. The dash panel doesn’t try to impress you. There are no gauges that give any clue to its being a hybrid, except for a big green leaf on the panel.

With seat frames that came out of the near-luxury Optima sedan, the front seating position is high, reducing headroom; but it’s still not as high as in the Soul or Sportage, which have taller rooflines.

The cabin is wide and feels it. There’s comfortable room for four people, and enough elbow room for five no problem. But maybe not headroom. The rear seatbacks are already canted, not upright, so the passengers’ heads don’t scrape the ceiling.

The cargo floor is low and flat, because the battery is under the rear seat, and because there’s no four-wheel-drive components to make room for.

There’s less cargo space than in the Soul or Sportage: 19.4 cubic feet with the rear seat up, and 54.5 cubic feet with it down, not quite flat. But we found that it squashed down flat when we put weight on it. The cargo capacity is a lot less than the Prius v, with its 67.3 cubic feet.

Kia put a lot of effort into insulating the body structure and isolating engine noise, and it shows. When you floor it and the engine howls, the noise stays out of the cabin.

Once, we found ourselves with an empty battery at the top of a hill. Zero electric range. By the time we got to the bottom of the hill, after coasting and taking advantage of regenerative braking, we had added three miles of range.

Friction braking with the brake pedal also charges the battery. The pedal was a bit spongy, and the travel was long, but the blending of regenerative braking with friction braking was seamless. However, both Niro powertrains sometimes hesitated or lurched during transitions between braking, regeneration, and transmission shifting. It’s one drawback to the Kia (and Hyundai) single-motor hybrid system, as opposed to the two motors used by Ford, GM, Honda, and Toyota.

The Niro sheds pounds with an aluminum hood, liftgate, and suspension bits. Its light weight and low center of gravity largely make the car handle and hold the road well.

It’s far more fun to drive in Sport mode, but that’s where the fuel mileage will sink. Eco mode is more frugal, but it’s sluggish. The Eco mode is uncomfortable because it prevents the transmission from kicking down for acceleration. The engine will stay in higher gears as long as possible, which not only keeps the rpm and sound down, but brings in the electric motor to add torque for acceleration.

The Niro snaps into Sport mode as the driver pulls the shift lever to the left, almost like a downshift. The car comes alive, and easily keeps up with fast traffic on the freeway. The Sport mode enables sharper throttle response and transmission shifts; and supposedly sharper steering too, although we couldn’t feel much difference in turn-in quickness or weight in the steering wheel.

Niro doesn’t have paddle shifters, so you have to use the lever to shift the transmission in Sport mode. But, strangely, downshifting in Sport mode does not produce engine braking, especially the regenerative variety.

One novel feature, called the coasting guide, tells the driver the most energy-efficient time to coast and brake. Predictive Energy Control looks at the route set by the navigation system, and comes up with a plan to spare the throttle and raise the fuel mileage on the trip, then instructs you step-by-step on a screen how to achieve that goal. Of course it doesn’t have eyes, it’s based on speed limits and elevation; so what it tells you to do with the gas pedal and brake in real time, assumes you’re the only car on the road. But it gives you the right idea.

As a subcompact wagon hybrid and plug-in hybrid, the Niro works. It’s low, wide, practical, economical, quiet, fairly stylish and roomy, with good handling and decent acceleration when it’s in Sport mode. When it’s in high-mileage Eco mode, it’s a slug. We think it wins most comparisons to the Toyota Prius v, from powertrain to handling to mileage.