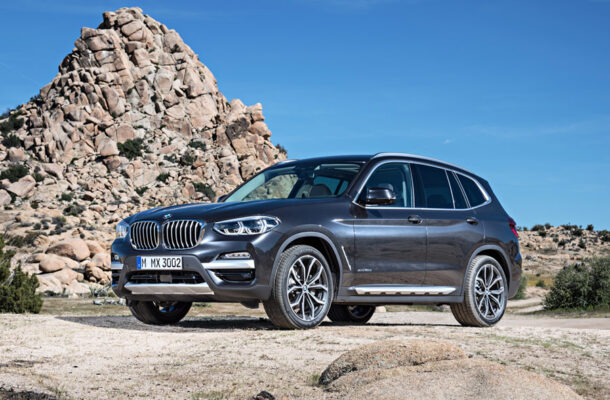 After a modest redesign last year, the 2019 BMW X3 luxury crossover SUV gets a new edition, the rear-wheel-drive sDrive 30i. It comes standard with automatic emergency braking, also added to the other two models, the all-wheel-drive xDrive 30i and M40i.

The 30i models use a 248-horsepower turbo-4, while the xDrive M40i uses a turbo-6 making 335 horsepower. Both engines are responsive and fun, mated to an excellent 8-speed automatic transmission.

The ride is as good as the powertrain, and the handling is quite agile, and not just for a crossover SUV.

The 2019 X3 is tall like most crossovers, with a lot of glass and a more expressive rear end. The bright and airy cabin is well appointed, and has a high level of technology.

The X3 seats five, but is more comfortable for four, with plenty of cargo room. Sport seats with good bolstering are standard, in the front.

The IIHS has rated the X3 a Top Safety Pick+. All models have automatic emergency braking. Optional safety equipment includes blind-spot monitors and lane-departure warnings, after which another package can be added for another $1,700, including adaptive cruise control and active lane control.

The X3 is clean and concise, its 2018 redesign having lowered the body and widened the track, just a bit. It still looks fairly tall, thanks to the glass. It’s a crisp-looking vehicle that balances its shape just a bit better than previous X3 SUVs have.

The cabin is well organized, and less fussy than the last X3 as well. The infotainment display screen is mounted on the dash over the center stack bracketed by metallic or wood trim.

The BMW infotainment system is powerful, and can be used for many functions including navigation, making restaurant reservations, calendar notifications, and sending and receiving text messages.

The Executive Package adds chrome trim and leather on the dash, moving the X3 into a luxury realm. It’s quite utility-minded, with many storage bins in the doors and center console.

There is ample space in the front, including headroom, even with the panoramic moonroof.

It’s also good in the rear, with 36.4 inches of leg room and wide door openings to make it easy to climb in and out. The rear seats three in a pinch, but it’s better for two adults.

There’s good cargo space behind the second row, with 28.7 cubic feet. There are rails for  cargo management back there, and a hidden shallow storage bin. With the rear seat dropped, which is done easily, there’s nearly 63 cubic feet of space.

The 2.0-liter turbo-4 in the sDrive30i and xDrive30i is a brilliant engine, maybe the best in its class. It makes 248 horsepower and can shoot the X3 up to 60 mph in less than six seconds. There’s a hint of turbo lag when you floor it, but it’s no less splendid for that imperfection.

The 8-speed automatic that’s standard in all X3s is geared toward low-speed, stop-and-go driving. Out on the freeway it responds with quick upshifts and telepathic downshifts for passing and climbing mountains.

The handling is almost as nimble as a sport sedan, even with steering that’s fairly heavy, especially as felt through the surprisingly thin steering wheel.

The M40i is the real deal, with its turbo-6 making 335 horsepower and 369 pound-feet of torque. With all-wheel drive and that 8-speed automatic, it can blast to 60 mph in 4.6 seconds and hit a top speed of 155 mph, while blowing a statement out the pipes of its sport exhaust.

Gear-changes come quicker, and the paddles make the transmission more fun. The steering is still a bit heavy, and there’s some tension in the brakes, but it’s a delight to drive quickly.

The X3 sports a double-pivot front strut suspension (a BMW hallmark) and a five-link independent rear. Available adaptive dampers use Eco, Comfort, and Sport modes, and in M40i, Sport+ with a stiffer setup. The X3 rides well on 19-inch wheels, or even 20-inchers.

The BMW xDrive all-wheel-drive system is biased to the rear, and in the M40i it exaggerates that rear bias, for better cornering. The X3 xDrive is not a system meant for off-road driving, but with 8 inches of ground clearance and 19.6 inches of fording ability, it’s probably as capable as many of its less sporty rivals.

The 2019 BMW X3 is a nearly flawless performance SUV, with superior poise, flat cornering, tenacious grip, and momentous pleasure. In M40i trim, it’s a rival for any luxury SUV we can name—and even a rival for BMW’s own sport sedans.