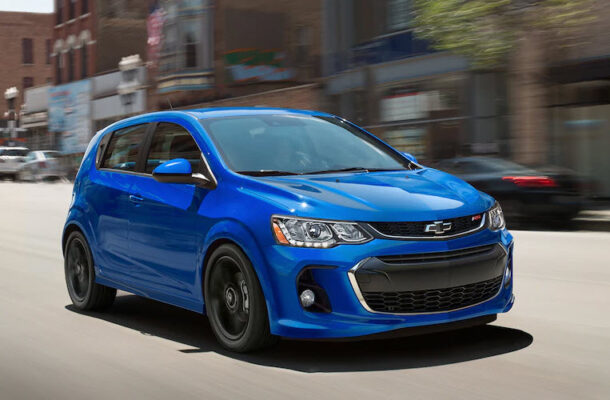 The 2019 Chevrolet Sonic subcompact sedan and hatchback made their debut as 2012 models, and remain urban-friendly and sensible choices in the small-car market.

Chevrolet no longer offers the 1.8-liter 4-cylinder as the base engine for Sonics. Little has changed otherwise for the 2019 model year, apart from one new color, dubbed “Shock.”

All Sonics now sport a turbocharged 1.4-liter 4-cylinder engine, rated at 138 horsepower and 148 pound-feet of torque. Either a 6-speed manual gearbox or a 6-speed automatic transmission may be installed. The turbo-4 engine has more perky acceleration than the now-departed, non-turbo 1.8-liter engine, with no significant penalty in fuel economy. An automatic transmission adds as much at $1,400 to the cost of a Sonic, depending on trim level.

An RS group, standard on hatchbacks and optional for sedans, includes a sport body kit and flat-bottom steering wheel, with the option of blacked-out 17-inch wheels.

Safety is a vital concern among typical subcompact buyers, and the Sonic compares well with others in its class. Automatic emergency braking isn’t available, however.

Crash-test results have been admirable. The Sonic has earned a five-star rating overall, and also for frontal- and side-impact, from the NHTSA. Only rollover prevention (a calculated figure) was rated four-star. The Sonic also earned “Good” ratings in every crash test performed by the IIHS.

Forward-collision warnings, lane-departure warnings, and rear parking sensors are optional for LT and Premier models, in a Driver Confidence Package.

Prices do not include $875 destination charge.

The Sonic’s styling has aged quite well. Chevrolet gave the sedan and hatchback a subtle freshening two years ago and it remains handsome.

The “signature” two-section grille is less prominent than it used to be. An RS package that’s available for sedans and standard on hatchbacks makes the Sonic look almost like a trendy hot subcompact.

A number of bright body colors are offered, for a refreshing appearance. As is often the case, hatchbacks look better than the sedans, giving the impression of being designed first. Sedans have a tall trunk that makes the car look a bit more blocky.

The Sonic’s cabin is well-trimmed; its low-sheen textures are impressive, considering the Sonic’s price. Infotainment is a strong point, with a touchscreen center-mounted above intuitive climate-control knobs. Useful data is supplied in a clear format, immediately ahead of the driver.

Whether in sedan or hatchback form, cargo space and utility are decent for a car of Sonic’s size. Sedan trunks hold an impressive 14.9 cubic feet. Hatchbacks get the versatility award, with 19 cubic feet of space behind the fold-flat rear seats. A hidden bin sits beneath the floor, with other storage bins and cupholders available.

On the road, the 2019 Sonic is surprisingly quiet and comfortable and enjoyable to drive for a subcompact, too, helped by the newly standard turbo-4 engine. Picking a Sonic with 6-speed manual shift adds to the fun.

In both handling capabilities and well-controlled ride quality, Sonics score a bit above average. There’s a sturdy quality about the Sonic, and it’s responsive, too. The steering is well-weighted, with a satisfying feel.

Fuel economy is satisfactory, but the turbocharged Sonic isn’t quite as thrifty as its dimensions suggest. With the 6-speed manual transmission, a Sonic is EPA-rated at 28/37 mpg City/Highway, or 32 mpg Combined. With the 6-speed automatic, those estimates drop slightly to 27/35/30 mpg.

For a small car, the 2019 Chevy Sonic is competent and enjoyable. Only the higher trims have the most recent safety hardware, but all versions have a well-trimmed cabin with good infotainment. Hatchbacks don’t cost much more than sedans, but provide a spacious cargo area, making the LT hatchback a notably good value.