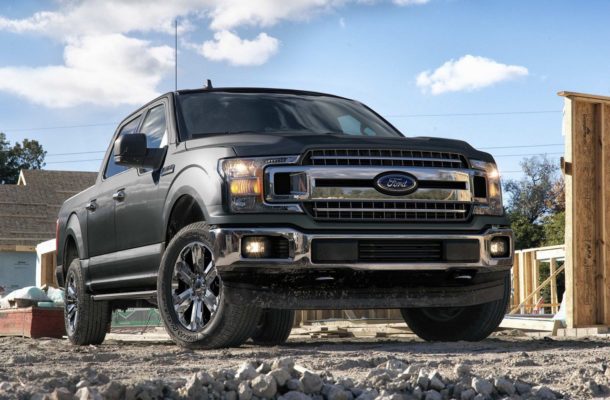 One word to describe the 2019 Ford F-150 might be “bewildering.” Not the vehicle itself, but the choices and characters it offers. It tries to be almost everything to almost everybody, with its variety of powertrains, cabins and beds, and we must say it succeeds.

The F-150’s towing, comfort, and available safety are tops among all full-size trucks. The fit and finish is better than many of Ford’s sedans and crossovers, including some Lincolns. It has an aluminum body over its heavy-duty steel frame, to lower the weight. It has a fairly smooth ride and reasonably sharp handling, while not fooling anyone behind the wheel that it’s not still a tall, heavy truck. The fuel mileage is competitive but not great.

There are only minor changes for the new model year.

Last year the F-150 gained a new 3.3-liter V-6 base engine that offered more power than the outgoing 3.5 liter; the new V-6 makes 290 horsepower and 265 pound-feet of torque, and uses direct injection to improve fuel mileage over the old V-6. However it maintains the old transmission, a 6-speed automatic, its only use in the F-150 line. It gets 19 mpg city, 25 mpg highway and 22 mpg combined.

The twin-turbo, 2.7-liter V-6 makes 325 horsepower and 400 pound-feet of torque, effectively replacing the V-8 engine that Ford used to put in this space. It uses the more modern 10-speed transmission, and gets about the same mileage as the less powerful base V-6: 20 mpg city, 26 highway, and 22 combined.

There’s another twin-turbo V-6, bigger at 3.5 liters and a lot more powerful with 375 horsepower and 470 pound-feet in most versions. But hold onto your hat: in the Limited and Raptor models, it’s tuned to make 450 hp and 510 lb-ft. Even with all that power, it still gets 17/23/19 mpg, and that’s with four-wheel drive.

Regular-Cab F-150s are targeted at fleets, and maybe too the SuperCabs with small rear bench seats and rear-hinged rear doors, designed more for loading packages than passengers. The SuperCrew is the best-seller to individuals, being expansive inside, with reclining and folding rear seats that provide good lockable storage space. Beds of 5-foot-6, 6-foot-6, and 8-foot lengths come on various cab styles.

The NHTSA gives the F-150 five stars overall, with four stars for rollover resistance. The IIHS gives it the best “Good” rating in every category it tested, except for headlights, where it gets a “Poor,” and the difficult passenger-side small-overlap protection, which the IIHS hasn’t done yet.

But there’s a problem here. Safety scores are strong, but automatic emergency braking isn’t available on the lower- and medium-cost F-150s, as it should be. You have to buy way up at the Lariat level, until active systems even become optional. Until you spend that money, you can’t get forward-collision warnings and automatic emergency braking, blind-spot monitors, adaptive cruise control, active lane control, or inflatable rear seat belts.

As work trucks, XL and XLT can be configured with any cab style (Regular Cab, SuperCab, and SuperCrew) and every bed length (5-foot-6, 6-foot-6, and 8-foot). Nearly every drivetrain can be specified in them, as well.

The XLT adds power locks and windows, chrome bumpers, and a CD player. But it’s meant to be like a blank canvas for buyers: it can be equipped with 18-inch wheels, a sport-appearance package, an off-road package with skid plates and special shocks and four-wheel drive, and a trailer-assist feature that makes hitching as easy as the turn of a knob. The XLT also can be fitted with navigation, power seats and power-adjustable pedals, and blind-spot monitors.

On the top of the luxury range, the Limited gets 22-inch wheels, a standard turbo V-6 engine, a dual-pane sunroof, standard surround-view camera system, and LED headlights.

For lovers of high performance, the F-150 Raptor turns up the boost on the 3.5-liter twin-turbo V-6 to get 450 horsepower (optional in the Limited) and adds six drive modes, exceptional ground clearance, and special knobby off-road tires. It’s essentially a desert muscle car with a short pickup bed (5-foot-6) on the back, and costs about $53,000.

The F-150 isn’t exactly aerodynamic–or maybe it is, and what we should say is that it’s not swoopy. If there’s a curve anywhere on its two-box shape, we can’t find it. We looked in the various grille designs, the headlamps, along the sides, and across the wide tailgate. All straight as a straight-edge. That said, neither is there any add-on junk to disrupt the flow of air.

King Ranch and Limited trucks lay on the chrome, while a Sport package grafts on a better-looking honeycomb grille. The best way to tell one F-150 from another (not counting the outrageous Raptor with its huge knobby tires), is to check the trim and tailgate. The XL work truck has black trim (which we think is cleanest), while the chrome grows with the price. At the back the Lariat bears a huge F-150 stamped into the tailgate, while other models sport a metallic brushed inset.

The cabin varies travels from unglamorous in XL to plush in Limited, passing through rhinestone cowboy in King Ranch.

The XL fleet-spec pickups have a chunky, plain dash with easy-to-clean materials including cloth upholstery and vinyl floor mats. The instrument panel isn’t fussy, with controls that can be twisted or poked with big gloved hands, and actual dials in places where other vehicles have awkward touchscreens. There are many cupholders and enough USB ports to charge a stable of tablets and smartphones, as well as standard 110-volt outlets that can recharge small appliances and tools.

From the Lariat on up, the instrument panel sprouts big consoles, big touchscreens, LCD screens inside its gauges, as well as leather seating and wood trim. However it remains efficiently organized. The whole cabin is an uncluttered workspace that is versatile and eminently usable.

The F-150 is fairly quiet inside, although the XL doesn’t have acoustic glass like the rest, so it’s going to be a bit louder. The turbo V-6 models noise cancellation piped into the cabin.

The bed comes in three lengths: 8-foot, 6-foot-6, and 5-foot-6. There are options such as in-bed loading ramps, interior bed lighting, and cleats and brackets for securing things.  The models with the 8-foot bed offer 36-gallon fuel tanks, as the two often go together: long beds, long trips.

The two-door Regular cab has a spartan cabin with a front bench or wide bucket seats split by a huge console. There’s plenty of head and leg room, but not much in the way of creature comforts.

The extended SuperCab has rear-hinged rear doors that access a short back seat that works for short distances with small people, namely kids. It’s more useful when it’s folded flat for packages, or up and out of the way for more storage.

The four-door SuperCrew is the most popular configuration, with exceptional cargo capability and ample room everywhere. It has four full-sized, front-hinged doors, and can hold up to five adults in very good comfort. There is a vast amount of rear-seat space, with reclining seatbacks. The rear seats also fold up against the bed wall to allow even more lockable storage space; while spaces under the seat can hide laptops and power tools. A deep and wide front-center console that has more room for laptops, tools, even hanging files.

In King Ranch and Limited trim, the front seats have multi-contour adjustment, heating and cooling. You might think you’re riding in a Lincoln Navigator.

At low to medium speeds, the F-150 is a smooth as a mid-size sedan. It doesn’t need fancy adaptive shocks like on the Ford Expedition SUV, or the air-spring setup of the Ram 1500 truck. Its simple old-school suspension works fine: a coil-and-shock front end with a Hotchkiss-type solid rear axle on leaf springs, and outboard shock absorbers that are staggered to reduce axle windup.

But when the speeds increase and some bumps come along, the F-150 bounds like the big truck it is. The electric steering is tuned to anticipate this motion, and it can steer to counter crosswinds when a trailer is towed, but the suspension isn’t quite as composed as some rivals.

Ford’s active lane control system needs to be improved. In our driving experience, the system causes the truck to pinball within its lane, and it confuses road seams with lane stripes.

The 3.3-liter V-6 base engine relatively quiet under strong acceleration, and has good low-end torque that couples well with the 6-speed automatic. It doesn’t strain much to deliver the efficient power it needs for its lighter-duty ratings.

The most common engine in the F-150s that roll off showroom floors will be the 2.7-liter turbocharged V-6 mated to the 10-speed automatic transmission. It makes 325 horsepower and 400 pound-feet of smooth torque that comes at the low end.

Ford developed that 10-speed with GM, and it’s a good one. Effortless upshifts can  change up to five gears at a time, and the downshifts are smart and quick. It settle into its top two gears until it’s been cruising at higher speeds for a long time, but uses all those lower gears to deliver better fuel mileage (both gas and diesel) without hindering the towing capability. Properly equipped, the 2.7-liter F-150 can tow more than 8,500 pounds, and carry 2,500 pounds in the bed.

When you consider that they call these trucks “half-ton” pickups because that’s the payload they’re expected to carry, a capacity of nearly that is darn impressive.

As for the twin-turbo 3.5-liter V-6 that makes 375 hp and 470 lb-ft of torque, its throbbing exhaust turns to an angry whistle after it launches. It can tow up to 12,000 pounds thanks to the low-end torque delivered by its smartly staged turbochargers. Its effortlessly strong power is made all the better by the fluid, instant shifts programmed into the 10-speed.

The Raptor is another story. It comes as a SuperCab with the short bed and all-wheel drive, featuring the twin-turbo V-6 boosted up to 450 horsepower with 510 pound-feet of torque. If you do some price comparing, its cost of about $53,000 is only about $1,000 more than a same-cab same-bed 4WD Lariat with the turbodiesel engine. So we can see a bunch of reasons for this one, especially if you have a use for those mega-knobby tires.

You can’t go shopping for a half-ton pickup without looking at the million choices that the F-150 offers. There are so many positive features in the many models that the best way to shop is to look at the negative features you can’t avoid.