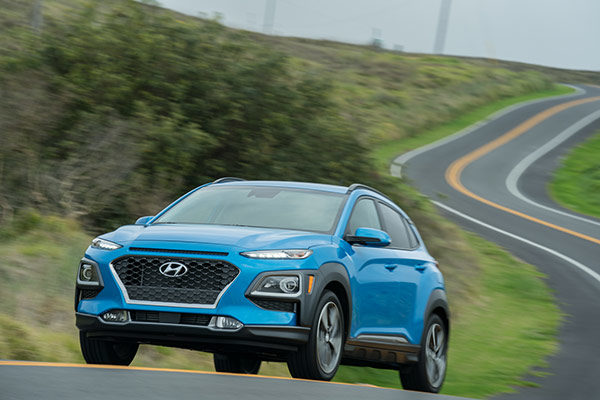 Kona is a region on the island of Hawaii, the biggest island in the Hawaiian archipelago. And now it’s also the name of a new motor vehicle, the smallest in the Hyundai inventory.

Could this have something to do with Hyundai’s decision to headquarter the Kona press preview in Kona? Could be.

Let’s talk about the vehicle.

This newest of Hyundais will compete in the booming category we’ve come to know as crossover utility vehicles, CUVs for short. And within this increasingly popular category, the Kona falls into the smallest group, a playground already swarming with players, Jeep Renegade, Honda HR-V, Mazda CX-3, Kia Soul, Subaru Crosstrek, and Toyota H-CR, to name just a few.

What does the Kona bring to the game?

Not size. The Kona is one of the smallest of these small CUVs, though its cargo capacity, 19 cubic feet behind the rear seats, is competitive, despite diminutive exterior dimensions. Yes, rear seat space is snug, and accommodating adults back there requires cooperation by those up front. But this is something that can be said of pretty much every vehicle in this class.

However, the Kona’s strong suit is dynamics. Robust power, by the standards of the segment, and responsive handling.

A key to the Kona’s athletic character is an all-new sub-dural architecture, 52 percent composed of high-strength steel, something that Hyundai produces at home. The new platform will be employed for other vehicles from Hyundai and its Kia subsidiary; the Kona is its first application.

There are two powertrain choices, a 2.0-liter four (147 horsepower, 132 pound-feet of torque), with a six-speed automatic transmission, or (optional) a turbocharged 1.6-liter four (175 hp, 195 lb-ft) paired with a seven-speed dual clutch automatic. Both combinations can be found in other Hyundais.

Hyundai plans to offer other engines for the Kona in other markets, a 1.6-liter turbodiesel, and a 1.0-liter three-cylinder turbo, but for now, at least, neither will be available in U.S. models.

However, a pure electric Kona is in development, and is expected to appear in U.S. showrooms sometime in 2019.

A Tech Package is available for the SEL trim ($1500), elevating it close to the Limited model in terms of features. And all-wheel drive is available for all trim levels ($1300). Based on its experience with other models, Hyundai anticipates that half of Kona customers with want AWD. (The destination and delivery charge for all models is $950.)

It’s hard for a vehicle to stand out in a segment chock-a-block with small crossovers that all answer, in varying degrees, to the same stylistic ethos: the basic two-box school of design. One box up front, housing the engine and, for front-drive designs (such as this one), the transmission. The bigger box dedicated to passengers and cargo.

Nevertheless, the Kona manages to be distinctive. Part of this is due to its proportions, limited overhangs (the portions of the vehicle extending beyond the axles), particularly at the rear. Wide track, Gray wraparound vinyl cladding around the wheel wells, reminiscent of the old Honda Element.

With its squinty LED lights, big Hyundai hex grille, and swooshy character line sweeping up from the front fenders to the squinty LED taillights (the design team says it was inspired by lava flow, hence the name), the Kona manages to look different from its many rivals. Like the Kia Soul, it projects a sense of cheeky impudence that should please the urban adventurers targeted by Hyundai marketing.

Presumably, urban adventures do not include anything approaching serious off-roading. As noted, the Kona can be equipped with all-wheel drive, and wheel choices range from 16 to 18 inches. But with 6.7 inches of clearance between vulnerable chassis elements and mother Earth, tackling anything beyond a well graded gravel road is not recommended. There are sedans with more ground clearance.

If you’re looking for real off-road capabilities in this class, check the Jeep Renegade Trailhawk.

The inner Kona is comfortable, attractive, and well appointed, with instruments and controls that don’t require reference to the owner’s to operate. Consistent with current trends, a center dash touch screen (7.0-inch SE, SEL, 8.0-inch in Ultimate trim, or SEL with the optional tech package) takes care of some secondary control functions. But Hyundai hasn’t entirely abandoned knobs and switches.

Consistent with Hyundai practice, even the basic SE is well equipped, including power everything, a tilt-telescope steering column, decent audio, Apple Car Play and/or Android Auto, and the company’s Blue Link telematics. At the top of the line the Ultimate model includes niceties like navigation and a head-up display.

Hyundai calls some of the Kona’s interior surfaces soft touch, but soft compared to what? Maple, maybe. There are also some plastic pieces that look a little, let’s say, inexpensive.

The uplevel upholstery (Limited and Ultimate models) is leather, while the SE and SEL trims have a cloth material with a houndstooth check pattern that’s quite attractive and looks to be durable. Limited and Ultimate models include the option of lime green dashboard highlights around the HVAC vents and upholstery piping in the same color on the leather seats. Whether this touch is appealing is up to you.

Regardless of trim, the front seats are roomy, reasonably supportive and comfortable, with one asterisk. Only the driver’s seat offers up and down adjustability, and that only in the Ultimate model. The front passenger seat doesn’t adjust upward at all, regardless of trim.

Also, making a couple of adult-size people comfortable in the rear seat requires considerable cooperation from those up front. It’s snug back there. But this is a criticism that applies, in varying degrees, to every vehicle in this class.

When a vehicle’s development starts with a rigid chassis, the rest of the program gets to be a matter of what the carmaker wants it to do, what kind of responses are appropriate to the character the product development people want to project.

In the Kona’s case this comes across as very sporty indeed, and a pleasant surprise. Body motions are nicely controlled, not much rock and roll in enthusiastic cornering, confidence-inspiring tire adhesion, confidence that’s augmented by the braking.

The Kona preview drive took across the middle of the big island of Hawaii, from northwest to southeast, and included some entertaining roads with lots of elevation change, decreasing radius corners (i.e., turns that tightened up, often at the top of a rise), fast turns, zig-zag sections where each zig and zag had its own profile.

Through it all, on a day that included moderate rain, the Kona attacked corners eagerly, never putting a wheel wrong. Put of this can be ascribed to the Kona’s torque vectoring, which uses selective braking to increase power to the wheel, or wheels, with optimum traction.

Keeping a vehicle level in hard cornering requires firm suspension tuning, and the Kona falls into that category, but not to the extent of harsh ride quality. Credit well chosen shock absorber damping.

Transmission performance is smooth, with either of the automatics. Neither engine is likely to provoke acceleration brownouts, but both provide adequate power, with the obvious edge going to the 1.6 turbo. Given the sporty character of the chassis, a manual transmission would be an appropriate option, or paddle shifting, but neither are offered.

The interior is reasonably quiet at speed, almost no sound generated by wind, very little noise coming up through the suspension on gnarly surfaces.

But the most immediately engaging element in the Kona’s dynamic resume is its steering. As with almost all new vehicles today, it’s an electric rack-and-pinion system, and like many its motor is mounted on the column, rather than the rack.

This bears mention, because rack-mounted systems are generally more tactile and accurate. But the Kona setup is nothing short of exemplary, quick at 2.5 turns lock to lock, giving the driver a strong sense of connection with the vehicle.

The Kona gives Hyundai an entry in a vehicle class where it was conspicuous for its absence, with Hyundai’s usual strong value story. There are bigger, more spacious players in the subcompact CUV game. But the Kona seems roomy enough for most urban adventures. And when those adventures go beyond urban boundaries, the Kona’s driving dynamics are at the top of the charts.