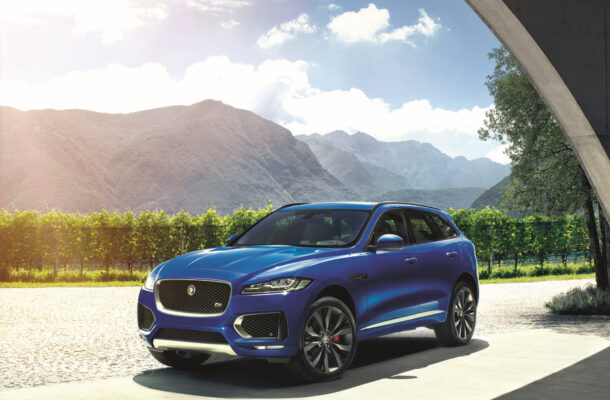 New in 2017, the Jaguar F-Pace was the first crossover SUV vehicle to be produced by the British carmaker. Jaguar may have joined the luxury-SUV parade a bit late, but the F-Pace comes across as a balanced, worthy crossover with premium credentials.

Modifications are modest for the 2019 model year, including the addition of a standard 10-inch touchscreen for infotainment. Following up on addition of a 247-horsepower base engine in 2018, Jaguar has launched a high-performance F-Pace SVR that cranks out a whopping 550 horsepower.

Style and grace abound, though performance takes precedence. Each powertrain – 25t, 30t, and 20d (diesel) – comes in a choice of trim levels: Premium, Prestige, and R-Sport. The 30t also is offered in Portfolio trim. An S Supercharged model, with V-8 power, elevates the performance potential.

In the S model, the supercharged V-6 generates 380 horsepower. The turbodiesel 4-cylinder (20d) makes only 180 horsepower, but releases a burly 318 pound-feet of torque. Diesel power costs $1,500 more than the gasoline-engine equivalent.

In the new SVR, the 5.0-liter supercharged V-8 whips up a mighty 550 horsepower and 502 pound-feet of twisty torque.

No F-Pace has been crash-tested by either the NHTSA or the IIHS.

A number of contemporary driver-assistance and safety features are available. Some are standard, including active lane control and parking sensors. An optional Drive Pack includes blind-spot monitors and high-speed automatic emergency braking.

Prices do not include $1,025 destination charge.

The F-Pace wears captivating sheetmetal that suggests an adventurous personality. Promising an appealing blend of sportiness and utility, the F-Pace has tapered windows and a sloping roofline. Leading the way is Jaguar’s big “signature” grille, augmented by headlights that look ready to snarl.

Short on visual flair, the subtle F-Pace cabin aims to place serious business ahead of mere pleasure. Classy yet practical, it’s a frill-free example of stressing function over form.

An F-Pace is bigger inside than its sleek body might suggest. Space is plentiful for seating five adults comfortably, even if some are taller.

Slimmed-down sport seats are firm and flat, though lumbar support isn’t quite as effective as hoped. Despite sporty appearance, the driving position is comparatively high.

Stirring performance is the F-Pace rule, regardless of engine – from frugal turbodiesel to screaming, high-output V-8. Vivacious responses, agile on-road handling, and a sporty nature are matched by well-composed driving manners.

The new 550-horsepower SVR behaves almost like a sports car – a vigorous one at that, able to hit 60 mph in a startling 4.1 seconds.

While generally comfortable, the ride grows harsher with large wheels mounted. The F-Pace suspension does a good job of inspiring confidence. So does the all-wheel-drive system, which yields rear-drive characteristics

Off-roading is on the menu, helped by impressive approach/departure angles and 8.4-inch ground clearance (except for SVR). The F-Pace’s inner nature comes to the forefront on twisty back roads, matching nearly any competitor in fun and competence. Few of them are capable of fording through 20.7 inches of water.

Even in base trim, the 2019 Jaguar F-Pace feels luxurious and high in quality. Like other modern-day Jaguars, it pushes performance over plush amenities. Adding graceful moves to simple brute force, the F-Pace is one of the best-handling—and most comfortable—SUVs. Though costly when fully-equipped, widescreen infotainment and ample active-safety features add value.