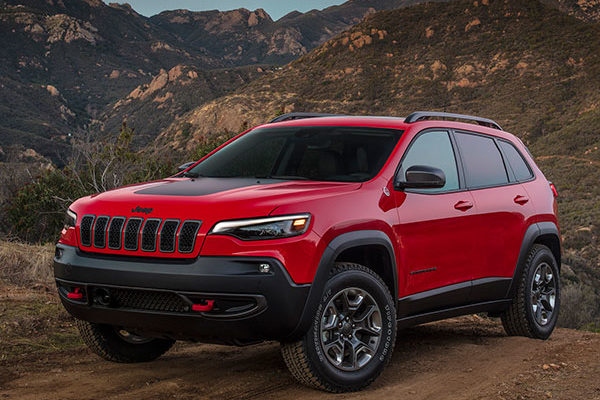 Dormant until its 2014 revival, Cherokee is a name that has a special place in Jeep history as the vehicle that essentially launched the sport-utility boom back in 1974. Prior to the Cherokee most SUVs were either Jeeps (CJ5, CJ7) or rugged wagons designed to perform in unpaved terrain (think Ford Bronco).

The original Cherokee was a game-changer. Cherokees began showing up in suburban driveways and supermarket parking lots, owned or at least driven by women. The phenomenon did not go unnoticed by the rest of the industry. Chevrolet soon responded with the Blazer II, Ford with the Bronco II, and it was game on.

For 2019, the latter day Cherokee gets an extensive refurbishing. Though the updates don’t extend to the basic architecture (chassis dimensions carry over from the 2014 revival) the exterior has been restyled, the interior is a little more upscale, cargo capacity makes an incremental gain, the engineers have pared as much as 150 pounds from curb weights (depending on model), there’s a new turbocharged four-cylinder engine option, and a new turbodiesel on the horizon.

Basics: like every Jeep but the Wrangler, the Cherokee is a unitbody (the frame and body are unitized), basically a front-wheel drive design with the option of four-wheel drive. It competes with compact crossovers such as the Honda CR-V and Ford Escape.

And of course as with any Jeep, off-road competence is part of the deal, particularly in the Trailhawk model.

The standard engine continues to be a 2.4-liter SOHC four-cylinder, 180 horsepower, 170 pound-feet of torque, and the traditional upgrade continues to be the equally familiar 3.2-liter V6 (271 hp, 239 lb-ft). Shared with the new Jeep Wrangler, a turbocharged 2.0-liter four (270 hp, 295 lb-ft) also joins the option list. All three engines are paired with a nine-speed automatic transmission, and two levels of four-wheel drive are available.

Despite the turbo’s big edge in torque, the V6 is the towing champ, rated up to 4500 pounds. The turbo maxes out at 4000 pounds.

All three engines have stop/start technology. The 2.4-liter four and 3.2-liter V6 run on regular fuel, while the new turbocharged 2.0-liter requires premium. 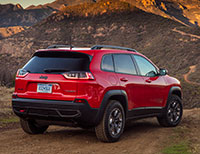 There’s no mistaking the Cherokee for anything other than a Jeep (something that’s true for all Jeeps). The seven-slot grille is familiar, but the design team has made it slightly beefier. But the most immediately visible change is the front end lighting layout, which places the squinty new LED headlights (standard on all trims) high with the fog lights below.

The bumper is new, as is the aluminum hood, and the rear end has a new composite tailgate operable by the popular hands-free foot-swipe feature. LED taillights are also new, as is the capless fuel filler.

The Trailhawk front fascia was redesigned to offer an improved angle of approach for tackling abrupt inclines. Its Trail Rated badge indicates the Trailhawk is capable of traversing the Rubicon Trail without sustaining damage.

Updates inside the Cherokee are subtle: improved materials, new color-coordinated decor with fancy names such as Storm Blue (inspired by the Icelandic landscape), and new trim details such as piano black plastic and satin chrome.

The center console has been redesigned and shifted slightly rearward, creating a space for stashing a cell phone near a USB port, enhancing connectivity. There’s also a 115-volt outlet, as well as the latest version of FCA’s Uconnect infotainment system.

Available premium touches include heated and ventilated seats clad in Nappa leather and a heated steering wheel. Approach your locked Cherokee with the key fob and it’ll automatically unlock when you try to open the door.

For 2019, Jeep has designed more volume into the rear cargo area, which expands to 26 cubic feet, wide enough to accommodate a pair of golf bags lying side by side, according to Jeep. With the rear seats folded flat, max cargo is 55 cubic feet.

And a nifty Jeep touch: in Cherokees equipped with ParkSense parking assist, when the system is engaged little electronic images of the original 1941 Willys Jeep appear on the dashboard screen. 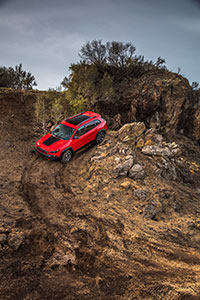 Our test drives employed two of the Cherokee’s three available engines: The new 2.0 turbo four and the tried-and-true 3.2-liter V6, both paired with the recalibrated nine-speed automatic. While the turbo is rated for gobs of low-end grunt, the transmission’s programming make it reluctant to kick down, and when the turbocharged engine is out of the sweet part of its powerband it’s sluggish.

The V6 fares a bit better in this respect, but the transmission still requires determination of the driver’s part to downshift. Paddle shifters would give the driver more control, but they’re not offered with any of the Cherokees.

On the winding, mountainous Mulholland Highway west of Los Angeles, we found the new Jeep delivers smooth ride quality and is devoid of surprises. It doesn’t rank at the top of its class in terms of on-road agility, however, stacking up as dynamically average among mid-size crossovers on pavement. Transient responses are deliberate and the driver doesn’t have to push very hard to provoke protests from the tires.

It’s a different story when the pavement ends. On a short but severe off-road drive, we benefitted from Jeep’s Selec-Speed crawl control, a sort of off-road cruise control that successfully maintains low speeds, down to about 0.6 mph, no matter how much the vehicle may be jumping around over rocky terrain. We think it’s fair to say that even a basic Latitude model with the Active Drive I four-wheel drive will go places no other vehicle in this class can tackle.

There are many attractive players in the increasingly popular compact crossover game. While Jeep cachet gives the Cherokee an edge versus the competition, it may be hard to see it as best-in-class for everyday driving. If serious off-road use is on the menu the Cherokee holds the high ground. With four-wheel drive, the Cherokee is highly capable in wintry conditions, particularly in the case of the Trailhawk model with its Firestone tires.