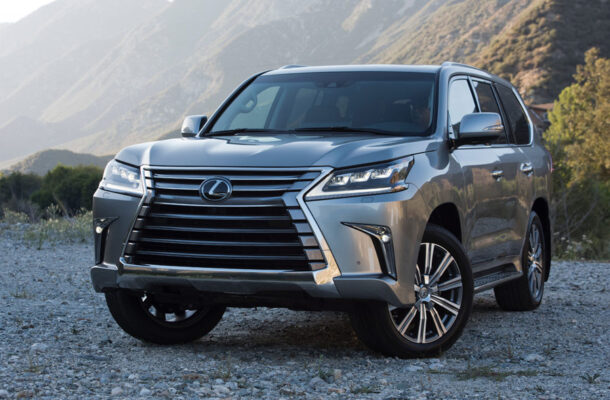 The Lexus LX 570 is a large luxury SUV with true off-road capability. That’s in part because it shares some running gear with the venerable Toyota Land Cruiser. For 2019 the only change is the addition of Amazon Alexa service to the infotainment system.

The LX 570 is powered by 5.7-liter V-8 making 383 horsepower, teamed with a 8-speed automatic transmission and two-speed transfer case for towing and off-roading. Its electronically controlled four-wheel-drive system has crawl control for low-speed climbing over big rocks, and a hydraulic height-adjustable suspension gives it a creamy ride.

The tall, narrow LX 570 isn’t built for crossover duties. Three passengers will be snug in the second row, and in the third row, fold-down jump seats are for occasional use only.

The five-seat LX 570 starts at $87,000, and comes with leather upholstery, wood trim, a 12.3-inch infotainment screen, active safety tech, and a power moonroof. A package with heated and cooled front and rear seats and softer semi-aniline leather costs $1,200.

The LX 570 with jump seats in the cargo space starts at about $92,000. Options include a Mark Levinson sound system and rear-seat entertainment system.

The LX is imposing for its size alone, and makes no effort to blend into the sea of cars on the highway. Its sides bulge with sharp angles, its nose towers over smaller vehicles from behind L-shaped LED headlights and a razor-edged spindle grille. It’s a look worn for about a decade, and it still looks handsome and clean—and imposing.

The view inside the Lexus LX is one of luxury. The low and wide dashboard looks like one from a Lexus sedan. Interior trim ranges from light tans to warm reds to coal blacks, in supple leather and fine wood that can be stained, glossy, or matte in finish.

A tall center console rides between the soft leather front seats. A 12.3-inch infotainment screen sits atop the dash, controlled by a mouse-like knob on the console.

For 2019 Lexus has added Amazon Alexa to the system, but Apple CarPlay and Android Auto aren’t available. The system includes several USB inputs and Bluetooth connectivity, with an optional wireless charging pad for cellphone.

The throne-like front seats are covered in soft leather and are heated and cooled. The second row could be wider for three passengers, but there’s good legroom. Standard running boards help those with shorter legs climb aboard.

Until last year, all Lexus LX 570s came with a third row. It’s an option now; when fitted, it powers up and out of the way when it’s not needed, but is not removable.

Behind the third row there’s about 16 cubic feet of cargo space, and 45 cubic feet with those rearmost seats power-folded up. The five-passenger LX 570 offers 50 cubic feet.

The LX 570 is a beast and matches its size with brawny power. It’s more tender on the road than it looks, though. The 5.7-liter V-8 offers strong acceleration from any speed, with crisp shifts from its 8-speed automatic.

The body-on-frame chassis uses solid rear axle and independent front suspension, but it’s that hydraulic suspension that defies the reality that the LX is a truck. The ride is downright cosseting, even on the optional 21-inch wheels. The LX 570 feels like it could smother potholes without its passengers even being aware.

In corners, the handling is reasonably composed but the steering is light and there’s significant lean–more so than in the Toyota Land Cruiser, which has trick anti-roll bars. It’s a huge luxury SUV, and behaves as such.

Off road, the LX 570 actually has more tricks than the Land Cruiser. Crawl control moves it at a walking pace up impossible grades, while the suspension raises and the many traction modes enable it to cross any terrain. The only limit is the big compromise of the massive spindle grille, which reduces the LX 570’s angle of attack.

The 2019 Lexus LX 570 is classic old-school SUV, and makes no bones about its size or its brute force. It has a great V-8 engine, a sweet ride, and the look of an authentic off-roader—which, by almost any measure, it is.