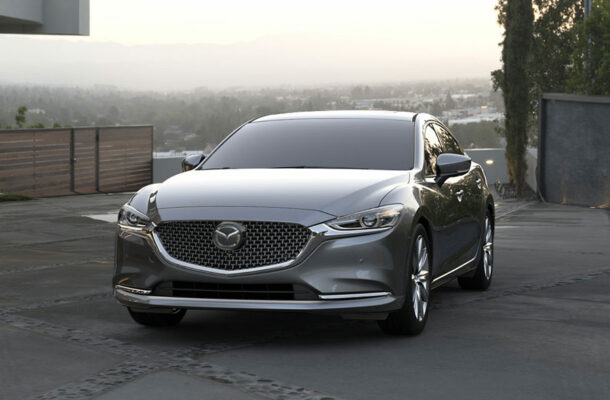 The Mazda6 sedan is known for its flowing lines and superb handling. Last year it got an optional turbocharged engine, suspension upgrades, and better steering. For 2019 every version gains automatic emergency braking, active lane control, blind-spot monitors, and adaptive cruise control. The only other change is the elimination of the 6-speed manual transmission.

The base and more popular engine is a frisky 2.5-liter 4-cylinder making 187 horsepower and 186 pound-feet of torque, mated to a 6-speed automatic transmission. The upgraded engine is a 250-horsepower turbo-4 with real muscle, especially for a family sedan.

The Mazda6 is 191.5 inches long, with a wheelbase of 111.4 inches, which is only 3.5 inches longer than the redesigned 2019 Mazda 3, but the Mazda6 feels bigger than that. It seats four comfortably, and five in a pinch.

The NHTSA gives the 2019 Mazda6 a five-star overall crash-test rating. The IIHS hasn’t rated it yet, but they gave the 2018 model a Top Safety Pick + designation when it was equipped with the active safety equipment.

The Mazda6 is one of the best-looking sedans on the road. Its organic windswept shape is a flowing exercise in simplicity.

The standard 17-inch wheels and tires fill the wheelwells, but the 19-inch wheels look great. Any color other than black, white and gray costs $595, but we think the Soul Red is worth it.

The cabin is tasteful and boasts high-quality materials, with excellent synthetic leather on the middle model and faux suede door panels and wood trim on the top models. A bright display screen rests on a sweeping dash. The standard Mazda Connect infotainment is quick to respond, though it’s run via a console-mounted controller instead of touch inputs. Apple CarPlay and Android Auto compatibility, as well as smartphone compatibility, come on higher-end models.

The seats are good, whether upholstered in cloth, synthetic leather, standard leather, or softer nappa leather. There is a solid 38.7 inches of rear leg room, although the roofline cuts into rear headroom. The 60/40 split rear seats fold forward, and the trunk has a solid 14.8 cubic feet and a wide load opening.

The 2.5-liter engine in the Sport and Touring models is smooth but a bit noisy; it makes 187 horsepower and 186 pound-feet of torque. With a curb weight of about 3,200 pounds, the Mazda6 is light for a mid-size sedan, which helps the acceleration. It’s a somewhat peaky engine that likes to be revved. In the pursuit of fuel economy, the engine can shut down two of its cylinders when they’re not needed.

Grand Touring and higher models get the 2.5-liter turbo that makes 250 horsepower on premium fuel, or 227 hp on regular. It’s strong on its own, but a Sport mode makes it more responsive, and the steering quicker.

The Mazda6’s gift is handling. The steering is direct and communicative. The car comes alive on a curvy road. There are clear bloodlines to the brilliant Mazda Miata.

The steering isn’t especially quick, as it’s actually relaxed on the freeway, where it tracks well. But its progressive rack dials in more steering as the speed increases in a very comfortable and quick way. Take one to the nearest circular on-ramp, and accelerate. You’ll see.

You’ll be helped by the G-Vectoring Control system of computer-controlled braking to separate front wheels in corners, bringing increased composure by shifting the weight distribution to where the grip needs it. Mazda says the deceleration force is just 0.01 g or less, so it’s undetectable, but it makes a difference to the dynamics. The turn-in is more secure.

The ride is composed, but not plush. In fact it might be called firm and sporty on the standard 17-inch alloy wheels, and firmer with the 19s on the Touring and Grand Touring models.

The 2019 Mazda6 may be more rare than some other Japanese family sedans. It’s also prettier, has sweeter handling, and has a richer interior that looks like it comes from a far more expensive vehicle.