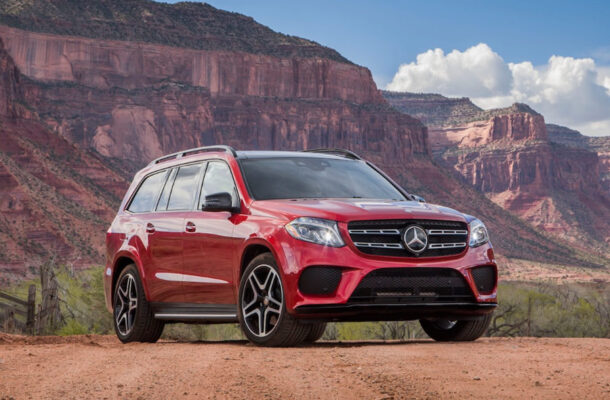 Traditional in design and appearance, the 2019 Mercedes-Benz GLS is a direct descendant of the former GL-Class SUV. For 2017, the facelifted GL was renamed GLS, in accord with Mercedes-Benz’ new model-naming scheme.

The GLS 450 is powered by a twin-turbo V-6, rated at 362 horsepower and 369 pound-feet of torque and driving a 9-speed automatic transmission.

In the GLS 550, a 4.7-liter V-8 churns out 449 horsepower and 516 pound-feet, using the same 9-speed automatic. All-wheel drive is standard on GLS 450 and GLS 550. An available Off-Road group adds a locking center differential and a reduction gear.

Topping the trio, the blazing AMG GLS 63 gets a 5.5-liter V-8 that generates 577 horsepower and 561 pound-feet. A stronger 7-speed automatic is installed, to handle the extra power.

Neither the NHTSA nor the IIHS has crash-tested the GLS. Plenty of the latest safety equipment is available, either standard or optional. Standard features include automatic emergency braking and a driver attention monitor. Optional are blind-spot monitors, active lane control, and adaptive cruise control.

Prices do not include $995 destination charge.

Maintaining a traditional appearance and nonsense-free stance has served the GLS quite well. Unabashedly big and boxy, it harks back a bit to an earlier period in SUV history.

Just about as boxy as any SUV is likely to get anymore, the GLS continues to attract a number of family-minded SUVers. To either its fans or its foes, this outsized wagon might look totally foreign, viewed against the far curvier, contemporary crossover SUVs in Mercedes’ own lineup.

Throughout the GLS interior, extravagant finishes range from decorative swaths of leather, wood, and metal, to carbon fiber and exotic wood veneers.

Only the largest full-size SUVs beat the GLS in passenger space. Seven adults can fit inside without fuss. Seating is flexible and comfortable. Front seats coddle their occupants, who can select from multiple adjustment options.

Generously-sized door openings make it easy to get into the second row. Here, three riders can fit with relative ease. Seats can be fitted with heating and power adjustment.

More than many third-row seats, those in the GLS are readily usable. Not only is the seat easy to adjust, access isn’t too difficult at all. The second-row can slide fore/aft or fold out of the way.

Cargo volume is on par with the biggest SUVs, measuring 16 cubic feet with seatbacks in all three rows upright. With the third-row seatback folded, volume grows to 93.8 cubic feet.

Despite its size, driving a 2019 GLS is no chore. Strong powertrains in each version grant it impressive performance, though turbo lag can be felt in the base GLS 450. A GLS also delivers capable all-weather behavior, even in the AMG model. The GLS 63 never feels slow or lumbering.

Mercedes-Benz’s 9-speed transmission tends to shift a little too often, causing the powertrain to feel overworked some of the time.

Helped by an air suspension, that dampens all but the worst pavement stretches, the GLS generally rides smoothly and feels fully under control. Standard 19-inch wheels promise the most comfortable ride experience. It’s best to skip the available 21-inch wheels; even with an adaptive suspension, they can render the ride somewhat stiff. Regardless of model, the 2019 GLS effectively manages to disguise its hefty proportions, but the most adept versions have an active suspension system that counteracts body lean in the suspension, which keeps the vehicle more level.

A considerable level of genuine utility helps make the 2019 Mercedes-Benz GLS a solid choice for families that need lots of cargo space. Luxury features and ritzy touches meld with vigorous performance and a satisfying ride for one satisfying luxury SUV.