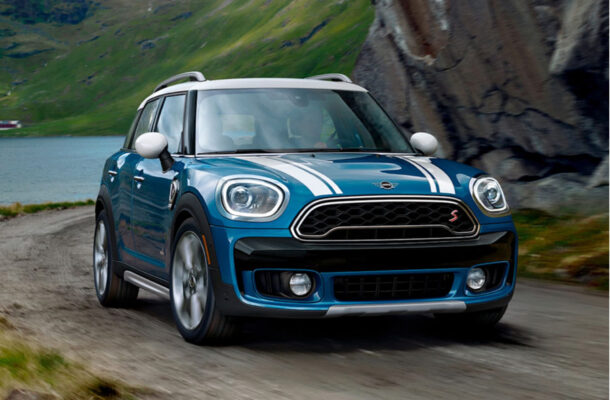 The 2019 Mini Countryman is a retro-themed crossover that draws on the Mini Cooper for its heritage cues. It’s the biggest Mini yet, and it’s more practical than the hatchback Cooper—and nearly as cute.

Nothing of consequence has changed for the 2019 model year. Launched as a 2011 model, the Countryman was redesigned for 2017.

Like the hatchback Mini Cooper, the Countryman comes with a choice of three engines: base 3-cylinder, 4-cylinder in Cooper S, and higher-output turbo-4 beneath the stubby bonnet of the John Cooper Works editions. The Countryman also comes with Mini’s first hybrid powertrain.

Rated at 134 horsepower, the turbo-3 base engine mates with either a 6-speed manual or 8-speed automatic transmission. Stepping up a sizable notch in performance, the Countryman S holds a 2.0-liter turbo-4 that generates 189 horsepower.

A higher-output turbo-4, cranking out 228 horsepower, powers John Cooper Works models. BMW (Mini’s parent company) uses the same 228-hp engine for its X1 and X2 crossovers. Turbo-4 models can have the standard 6-speed manual gearbox, but the 8-speed automatic is a no-cost option.

Mini’s first plug-in hybrid, the S E Countryman ALL4, can travel as much as 12 miles on electricity alone. A turbocharged 3-cylinder gasoline engine mates with an electric motor and a 7.6-kwh battery, for total system output of 221 horsepower.

Crash-testing by the IIHS resulted in top “Good” scores on all tests, including the driver-side small overlap crash. The NHTSA has not tested the Countryman. Automatic emergency braking is standard, except for base models.

Prices do not include $850 destination charge. Signature and Iconic trim levels are option groups, built upon basic Classic trim.

The Mini Countryman manages to retain the regular Cooper’s charm and character, if not its heritage, in a bigger version that at least approaches off-roading territory. Its more pronounced shoulders and haunches don’t conceal the Countryman’s close kinship to the Mini hatchback.

Front/rear bumpers and the grille differ from the hatchback’s, and the Countryman rides higher. More body cladding is used, suggesting rugged adventure possibilities.

Visually, the plug-in hybrid is virtually identical to its gas-engine mates, apart from a charging door on the front fender.

Inside, the biggest Mini model offers more space than the smaller Cooper, but shares its design themes. Materials feel high-quality in the expressive interior – provocatively quirky, but not excessively so. As its exterior dimensions predict, cabin space is substantially greater than a Cooper hatchback, with its cramped back seat, can offer.

Front seats are comfortable for adults, adding to the luxurious feel of the interior. They also provide better thigh bolstering with more sculpted seats. Sport seats are a $2,000 option, within a leather upholstery group.

Rear seats are better yet, providing 37.6 inches of leg room. Two adults fit nicely, and three can squeeze in without too much fuss. Tall riders, though, might want to claim the front passenger seat early.

Nearly all Countryman variants are fun to drive – just like comparable Cooper hatchbacks. The same trio of turbocharged engine lets the Countryman keep up with all rival crossovers—and it can be equipped with a manual transmission.

The plug-in hybrid’s powertrain is arguably the best one around. Mini claims 0-60 mph acceleration in 6.7 seconds with the hybrid.

The 3-cylinder base engine has a job in motivating the Countryman’s 3,500 pounds. The turbo-4 engines are better suited to the task—and Mini’s automatic transmission does a fine job of shifting with any engine.

Handling qualities back up claims that, like all Minis, the Countryman is a premium vehicle. Steering is simply superb. Although the heavier Countryman is hardly as agile as a Cooper hatchback, it’s still a joy to operate.

For families and folks who carry cargo, the bigger Mini Countryman is a wiser choice than the tiny Mini Cooper hatchback. Not only is a Countryman more comfortable for passengers, it looks good, and it’s still an entertaining drive.