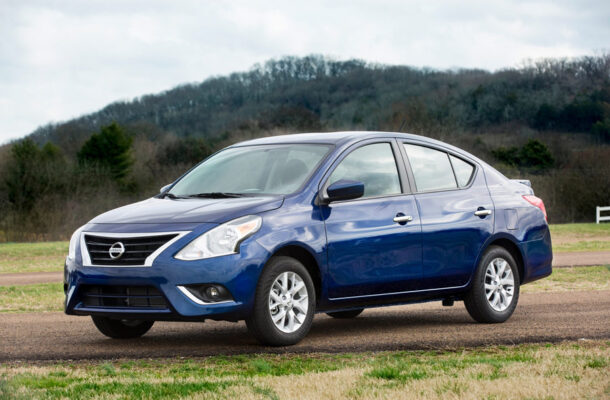 For about $13,000 the base 2019 Versa has clean styling, decent standard equipment, and a frugal powertrain. Prices can reach nearly $20,000, but even at that point the Versa is one of the most affordable new cars on the road.

The base Versa S gets air conditioning and Bluetooth in its spare cabin. The powertrain teams a 1.6-liter inline-4 with 109 horsepower to a 5-speed manual transmission, but for a couple thousand more, Nissan fits a continuously variable transmission (CVT).

In either version, the Versa’s acceleration around town is leisurely, but fuel economy is strong, at up to 34 mpg combined.

The Versa has a low curb weight of about 2,450 pounds, which means it can be entertaining on a twisty road. It has nicely weighted steering, too.

The Versa hasn’t been fully crash-tested by the NHTSA. The IIHS gives it “Good” ratings in its basic crash tests, but a “Poor” rating in the driver-side small overlap test.

A new Versa arrives for the 2020 model year.

The base Versa S sedan costs about $13,000 and includes a 3-year warranty, a 7.0-inch touchscreen for infotainment, Bluetooth, air conditioning, steel wheels with hubcaps, and roll-up windows.

The $15,500 Versa S Plus replaces the 5-speed with a continuously variable transmission (CVT) and adds cruise control and a rear spoiler.

The Versa SV costs about $17,000 and adds power windows and locks, plus remote entry, more adjustment to the driver’s seat, and a few other features. A package with keyless ignition and revised infotainment software with Apple CarPlay and Android Auto compatibility costs $800.

Versa Note hatchbacks are generally equipped about the same. There’s no manual transmission base model, so pricing with the CVT starts at about $16,500.

A Versa Note SV with the Special Edition package adds Apple and Android compatibility, alloy wheels, keyless ignition, power windows and locks, and a few other items. It costs about $18,300.

Narrow and tall, the Versa sedan has big headlights that sweep well into the fenders and flank a chrome grille. It’s a simple, clean, classic sedan profile with few frills.

The hatchback, called the Note, is cleaner and more cohesive, thanks mostly to the longer roofline. From some angles it looks more like a handsome small van than a subcompact hatchback.

The cabins of both the sedan and hatchback are plain and simply arranged, with good outward vision. Controls are grouped high on the dash.

The Versa’s front seats adjust four ways. The SV model has six-way adjustment for the front seats; the driver gets an armrest but not the passenger.

The Versa makes the most of its lean 109-hp engine. With the 5-speed manual it tries to feel sporty; the CVT puts the engine into the middle of the powerband. Neither creates too much power. The Versa’s meant for economy, not acceleration.

The Versa’s ride is fairly comfortable on most surfaces, including rough city streets or even dirt roads. There’s enough wheel travel for bumps. The steering has good heft and the road feel is decent, so it’s reasonably confident on a curvy road.

The 2019 Nissan Versa carries one of the lowest base prices in the new-car market. Its biggest appeal comes with the low price and its new-car warranty. Interior space is fine, and the Versa sips fuel with either transmission. It lacks some equipment standard on rivals, but most features can be had on the top trim levels.