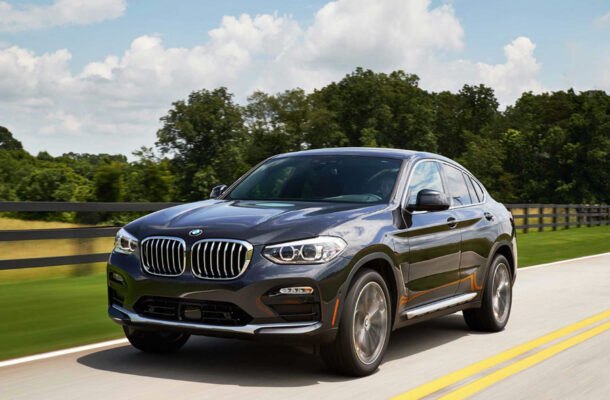 The 2020 BMW X4 is slick and swoopy, using the bones of the pragmatic X3 to create something with a little nerve and verve. If the 3-Series sedan is representative of the old guard, the X4 is the revolution. It embodies everything that today’s BMW seeks to convey.

Updates for 2020 are two new performance models: the X4 M and X4 M Competition. These high-strung models are bristling with horsepower and ready to chase after the comparable Mercedes AMG models.

Regular X4s aren’t so potent. They use a 2.0-liter turbo-4 that makes 248 horsepower and 258 lb-ft of torque. It hooks to an 8-speed automatic and sends power to all four wheels.

The X4 M40i is the first step up from the base engine. It’s powered by a 3.0-liter turbocharged inline-6 making 382 hp and also uses the 8-speed automatic.

Safety features standard on the X4 include standard automatic emergency braking, parking sensors, and telematics that automatically contact 911 in the event of an accident. Other optional features include a surround-view camera system, automatic parking, and active lane control.

The X4 has not been crash-tested by either the NHTSA or IIHS.

All prices include any applicable destination charges.

The base X4 xDrive30i starts at $52,095.That price includes all-wheel drive, 19-inch wheels, synthetic leather upholstery, a 12.3-inch digital instrument cluster, panoramic sunroof, a 10.3-inch touchscreen for infotainment with Apple CarPlay compatibility (but on Android Auto), power-adjustable front seats, and a power liftgate. Plenty of options are available as well, and a trio of major packages could be considered sub-trims of the X4.

The X4 M40i costs $61,995 to start. Along with the 382-horse inline-6, it adds a sport exhaust, adaptive dampers, and uprated brakes. Comfort and convenience features don’t differ much from the regular X4.

The X4 M and X4 M Competition start at $74,395 and $81,395, respectively. Comfort and convenience equipment remains in line with the standard X4; ditto with options and packages. As with the M40i, the upcharge is almost entirely for the powertrain.

The BMW X4 essentially trims the roof of the related X3 for a swoopier, sportier look. The move is anything but practical, but it does spice up the design and should stop anyone from calling this just another mall crawler. The final product is squat, planted, and tastefully decorated with trim.

The M and M Competition variants really get things cooking with their much more aggressive front bumper and a heaping of black trim. Out back they sport quad exhaust pipes, two per side. Their look is distinct from the more pedestrian X4 models and properly conveys the intent of these focused machines.

The BMW cabin is well trimmed and appropriately businesslike, but it doesn’t wow like a Mercedes or have the techno-punch of Audi. it’s more in line with what Cadillac is offering these days, tasteful and modern.

In terms of infotainment, every X4 gets a 10.3-inch touchscreen with the latest iDrive software. Newly standard for 2020 is Apple CarPlay compatibility, and it’s a welcome addition to the features list. Android users are still left in the cold, though. Luckily, the iDrive system is excellent on its own, so buyers shouldn’t feel the need to always call up their smartphone layout to the touchscreen.

The seating in the X4 is comfortable, with good bolstering and support for long drives. The M and Competition models get the sportiest seats, which could be too bolstered for some. The M40i is the favorable compromise, with supportive seats that don’t take high performance too seriously.

In the rear, passengers are only treated to 35.5 inches of legroom. This is a bit short for the class, with the GLC coupe and Audi Q3 offering 37 and 36 inches, respectively. Head room also suffers due to that sloping roof. These two factors together make for a cramped back seat.

It’s a similar story with the cargo area. The roofline eats into space, resulting in just 17 cubic feet of cargo space with the rear seats up. For comparison, the more upright X3 has 28 cubic feet behind the rear seats.

Purists may bemoan that modern BMW isn’t what it used to be, but the reality is that the X4 still has handling and performance chops that are above average for the segment. Even base models with the 2.0-liter turbo-4 accelerate, turn, and stop with a certain unexpected alacrity.

The already-zippy handling can be improved by ordering the M-Sport torque vectoring differential. It can split power between the rear wheels for better cornering response. And though the X4 isn’t rear-wheel drive, its all-wheel-drive system is biased toward the rear wheels.

Just as everything else seems to learn towards the sporty side of the spectrum, so does the ride. It is firm, even on base models. Adaptive dampers, which are standard on all but the 30i, don’t really improve things. Softer riding crossovers are out there.

Base X4 models with the turbo-4 are swift, and can accelerate to 60 mph in a little over six seconds. But our favorite model is the M40i, which trades the turbo-4 for a turbo-6 that makes 382 horsepower. It is fast enough to shave two seconds off the turbo-4’s 0-60 mph time, and it gets upgraded suspension tuning to go along with the big power bump. For the price, it can’t be beat.

The X4 M and M Competition are a different breed entirely. With 473 or 503 horsepower on tap, these are focused purebreds. They look, feel, and sound like raw performance vehicles, and though they are still comfortable enough to be daily drivers, they won’t ever blend into the background the way the M40i can. These two always stand apart. The Competition in particular craves track days.

The BMW X4 is a fun and tossable crossover that pleases even its base form. The new X4 M is pricey, and the M Competition even more so, but they show off how successfully a crossover can imitate a full-fledged sports car. But our choice remains the M40i, which expertly balances price, power, and comfort.

—by Anthony Sophinos, with driving impressions by The Car Connection