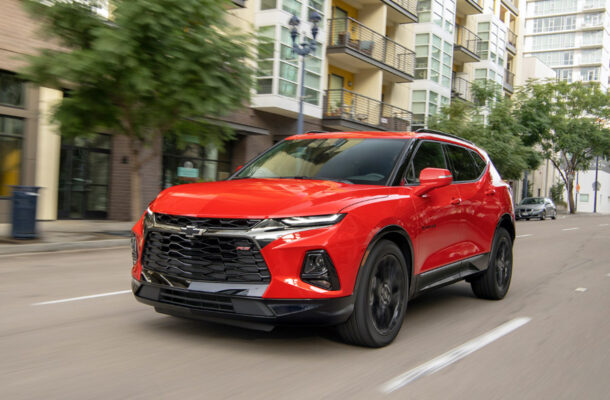 The 2020 Chevrolet Blazer is a new family-focused crossover that revives a familiar nameplate. Following a long history, the original truck-based and boxy Blazer faded away after 2005. The modern-day Chevy Blazer signals a clean break from that predecessor.

Now in its second season, the midsize Blazer is slotted between the compact Chevy Equinox and full-size Chevy Traverse. The Blazer delivers crossover comfort and contemporary lines, and it’s gained a new turbo-4 engine for the 2020 model year.

The base Blazer model doesn’t come with any standard or available active safety tech, which is a glaring omission. Blind-spot monitors, lane-change alert, rear cross-traffic alert, and rear parking sensors are available on the 1LT and 2LT models and standard and the 3LT and higher.

Crash test data is impressive but incomplete. Federal testers at the NHTSA gave the Blazer a five-star overall safety rating. The IIHS hasn’t completed its testing, but gave the Blazer the top score of “Good” in the side and moderate overlap front crash tests.

For a sportier Blazer, the $41,795 RS comes standard with the V-6 engine, shock absorbers, and quicker steering. It also adds navigation, an 8-inch driver information display, a heated steering wheel, a hands-free power liftgate, a unique grille, and 20-inch wheels.

Heading the lineup, the Premier is priced from $43,895 and includes cooled front seats, heated rear seats, a Bose audio system, a power-adjustable steering column, and a memory system for the driver’s seat, side mirrors, and steering wheel.

Far removed from the old Blazer and other boxy-profiled SUVs of the past, the 2020 Chevy Blazer is easily described as jaunty, if not debonair. Unlike the smaller Equinox, there’s nothing dowdy about the Blazer. Nothing trucklike, either.

Tall and somewhat narrow-bodied, the Blazer isn’t substantially larger than an Equinox. Sculpted lines feed into bulging fenders, topped by a canopy-style, floating-look roof with blacked-out rear pillars. A wedge-like rear-end uptick further enhances the crossover’s visual charm. Camaro-style taillights are quite small, but otherwise, the Blazer is nicely detailed.

A winglike dashboard spreads across the Blazer’s well-composed cabin. Some compromises are evident in control positioning, but the interior looks suitably restrained, with plenty of space. Fit and finish are better in upper trim levels.

Five adults fit neatly inside, but the front seats have short, rounded-bottom cushions that don’t support bigger occupants well enough. Padding is excessively firm, too, though back support is good.

Support is lacking in the back seat. The sliding second-row seat can alter the division of cargo and passenger space. When moved to the rear of its track, the rear seat provides abundant spread-out space.

The impressive infotainment system uses an 8.0-inch touchscreen, accompanied by symmetric banks of buttons. Some controls can be confusing without a bit of study. Climate controls consist of a stretch of slim buttons across the dashboard. Fan controls sit above large round air vents, which adjust by twisting their trim rings, but they tend to blow air into hands and eyes.

Cargo space behind the rear seat measures 30.5 cubic feet, expanding to 64.2 cubic feet when the seat backs are folded down.

There’s nothing wallowy or pillow-like about the modern-day Blazer, which handles and rides well. Unlike other recent Chevrolet crossovers, the Blazer can be fun to drive, helped by its raspy exhaust note and firm highway ride.

For the most satisfying performance, skip the base 2.5-liter engine, which isn’t quite energetic enough to cope with the two-ton Blazer. Power is decent but noise control isn’t, tending to moan at highway speeds despite active noise cancellation.

Not only does the new 2.0-liter turbo-4 deliver swifter acceleration, it sounds better than the base motor. Reaching a step further brings the 308-horsepower V-6, which thrusts the Blazer ahead with confident assurance.

Chevy’s carefully-programmed 9-speed transmission has the strength and “intelligence” to pull the V-6 Blazer with welcome assurance. Brisk launches can be expected, as the transmission is able to hold in lower gears when necessary. At low speeds, unfortunately, it tends to ponder what to do next, and occasionally skips too many ratios en route to a cruising gear.

All Blazers blend crisp handling with a firm, assertive ride, helped by electric power steering and an independent suspension, as well as relatively large tires. The RS edition can turn stiff at low speeds.

Base versions handle mild pavement harshness with firmness and just a bit of fidgeting. Steering gets heavier quickly on the highway, yet feels light when parking. Stiff tire sidewalls ensure good highway tracking. Road manners of the RS version suggest those of a properly-tuned sporty sedan.

Chevrolet has taken a long-lived model name and tacked it onto a crossover designed with contemporary values in mind. The good looks of the 2020 Chevy Blazer attract the eye, and either of the top engines deliver effective power. A lesser trim level might be a better value, but automatic emergency braking is only available on RS and Premier models.

—by James M. Flammang, with driving impressions from The Car Connection