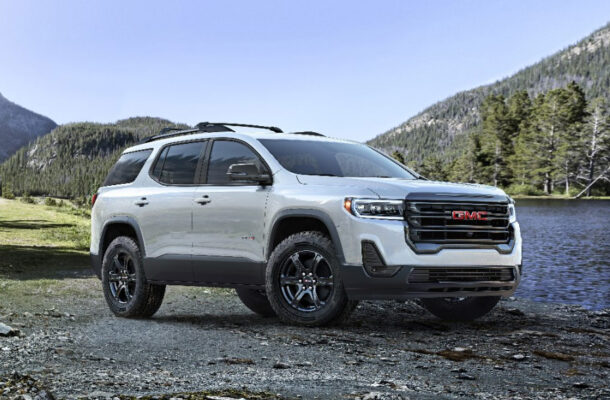 The 2020 GMC Acadia crossover SUV has plenty of space, a snazzy Denali variant, and tough-looking styling. It’s a great family vehicle that wears a rugged mask.

The 2020 model strives to impress with a flurry of updates. Under the hood, there’s a new 2.0-liter turbo-4 for mid-level models, and a new 9-speed automatic is standard with all engines. A stop/start system has also been made standard on all models for improved fuel efficiency. On the outside, a light refresh brings redesigned LED headlights and squares off the front end for a more truckish look.

Also new this year is an available off-road themed AT4 trim. Soon to be rolled out across the GMC line, the AT4 designation means fatter tires, more off-road hardware, and a tougher look.

The new turbo-4 brings the engine offerings for the Acadia up to three. The base models are powered by a 2.5-liter 4-cylinder that makes 193 horsepower and 188 pound-feet of torque. It’s limited to the bottom two trims and is only available with front-wheel drive.

Above this is the new 2.0-liter turbo-4, which makes 230 hp and 258 lb-ft of torque. It comes with the mid-trim SLE when equipped with all-wheel drive as well the SLT.

Standard active-safety features include blind-spot monitors and rear parking sensors. Automatic emergency braking, which is quickly becoming standard in most vehicles across most segments, is limited to option status on the SLT and AT4. It’s standard on the Denali, however, along with adaptive cruise control and active lane control.

All prices include a $1,195 destination charge.

The base SL ($30,995) is front-wheel drive and is powered by the 2.5-liter 4-cylinder. Standard equipment includes an 8.0-inch touchscreen with Apple CarPlay and Android Auto, LED headlights, 17-inch wheels, and tri-zone climate control.

The SE ($34,995 for FWD, $36,995 for AWD) adds selectable drive modes, 18-inch wheels, and satellite radio. It also opens up more options, including both the turbo-4 and V-6 engines as well as features like Bose audio, a power tailgate, and heated and cooled seats.

At the top of the lineup is the Denali ($49,990). It comes with most luxury features available on the Acadia, including automatic emergency braking, heated and cooled front seats, heated second row seats, and wireless phone charging. The V-6 and all-wheel drive are standard as well.

The facelifted 2020 Acadia brings some extra attitude to what was a pleasant but rather unexciting design. The new front end looks significantly wider and more pronounced, despite the dimensions remaining unchanged. The visual width comes courtesy of a bold, rectangular grille with three primary horizontal slats and new squared-off headlights.

Both the AT4 and Denali trims offer their own twist on the basic Acadia. The AT4’s blacked-out grille and all-terrain tires give off whiffs of capability, while the classic mesh grille and chrome accents of the Denali bespeak traditional luxury. The two unique styles help differentiate the Acadia from some of the more mundane-looking competition.

Nothing much has changed in the cabin of this GMC. It’s still the ergonomic and logical place of business it has been. The look isn’t exactly fresh, though, especially when compared to some of the dapper-looking cockpits found in other three-row SUVs like the new Kia Telluride.

The Acadia can be outfitted in either 5-, 6-, or 7-passenger formats. Every configuration is comfortable for four, and even five works in a pinch. But more than that and things get cramped. Even some kids might find the third row too tight.

Our favorite seating arrangement is the 6-passenger variation. The second-row captain’s chairs are luxurious thrones with plenty of leg room and good support. There’s no fore/aft adjustment, though.

Cargo space in the Acadia is plentiful, with 12.8 cubic behind the third row, 41.7 cubic feet behind the second, and just under 80 cubic feet with both rows folded.

An 8.0-inch touchscreen is the centerpiece of the dash and comes standard on every model, including the base SL. There’s standard Apple CarPlay and Android Auto connectivity, and higher-trim models add satellite and HD radio.

The Acadia has composed handling, a comfortable ride, and won’t tire out anyone who has to do a long stint behind the wheel. In other words, it’s a well-tuned family chariot that’s perfectly tailored to the usual suburban duties.

The most impressive aspect is the suspension tuning. It absorbs bumps and potholes with nary a flinch or complaint.

The base 2.5-liter 4-cylinder engine makes just 193 hp, and each one of those ponies feels overtaxed in almost every instance.

New for this year is the 2.0-liter turbo-4, whose turbocharger helps call up 230 horsepower and 258 lb-ft of torque. That additional 70 lb-ft of torque over the base engine wakes up the Acadia like an espresso shot. On-ramps, steep grades, and other more strenuous exercises are no issue for the turbo-4. And though the V-6 might have a more linear power delivery, it can’t match the turbo-4 for gas mileage.

Still, don’t discount the 3.6-liter V-6. There’s something about a big engine still making its power without a turbo. It makes a healthy 310 hp and 271 lb-ft of torque, and remains a great option for those who prioritize smooth power delivery over gas mileage.

Those who do put fuel economy at the forefront will want the turbo-4, which gets 21 mpg city, 28 mpg highway, 24 combined in front-wheel-drive guise; those numbers fall to 21/27/23 mpg with all-wheel drive. The base 4-cylinder is rated the same as an AWD turbo-4.

The 2020 GMC Acadia is a competent and spacious crossover that checks all the boxes for a family vehicle. With the improvements for 2020, the Acadia is more competitive than ever, and should be on anyone’s short list of crossovers to consider. Our choice is an all-wheel-drive SLT with the turbo-4 and six-passenger seating.

—By Anthony Sophinos, with driving impressions by The Car Connection