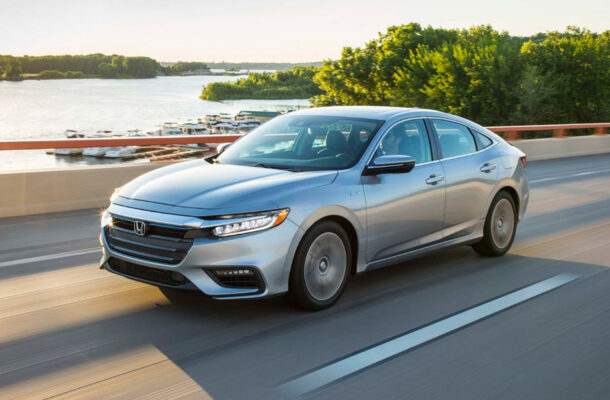 If pragmatic is your aim, the 2020 Honda Insight is your can’t-miss target.

For less than $24,000, the 2020 Insight sedan delivers more than 50 miles per gallon—52 mpg combined to be exact, according to the EPA, in most models. Another thing: the Insight totally aces every crash and safety test it’s put to, by both the Federal government and Insurance industry.

Its hybrid powerplant is unique. Its 1.5-liter inline-4 engine mainly drives a generator that powers the hybrid batteries, along with a 129-horsepower electric motor that drives the front wheels. Acceleration is leisurely, but at 52 mpg, perky isn’t a priority.

The Insight rides on the wheelbase of the Honda Civic. The batteries don’t cut into interior space, as it seats four adults comfortably, five in a pinch, while holding 15.1 cubic feet of stuff in the trunk.

The IIHS gives the Insight its Top Safety Pick+ designation in every model, as even the base Insight gets the best headlights available. The IIHS also called the Insight’s standard automatic emergency braking system  “Superior,” noting that the Insight avoided forward crashes at 12 and 25 mph.

The NHTSA gave the Insight five stars in every one of its crash tests. Every Insight is equipped with standard automatic emergency braking, adaptive cruise control, and traffic sign recognition. Insight EX and Touring versions add active lane control.

Honda offers the Insight in LX, EX, and Touring trim. For less than $24,000 the LX comes with cloth upholstery, LED headlights, a 5.0-inch display for audio, Bluetooth connectivity, one USB charger, 16-inch wheels, and the active safety features.

The EX costs about $25,000 and adds an 8.0-inch touchscreen for infotainment with Apple CarPlay and Android Auto compatibility, two USB ports, active lane control, a split-folding rear seat, and a better sound system with more speakers.

The Insight looks like the Civic, or the Accord, or both. It gets the Civic’s wheelbase and roofline, but after that it is its own design, sort of, as it borrows the Accord’s nose and tail.

There are some creases on the sides that are cleaner than those on the Civic, and the wheel arches are more graceful. It’s simply more sedate.

Consistent with the exterior, the interior is tasteful, not boastful. The low dash flows toward the middle, drawing attention to the center of the cabin. The front is spacious, with 42.3 inches of leg room and 39.3 inches of head room.

The front seats are comfortable and supportive, if a bit low. There is a wide range of adjustability, aided by the telescoping steering wheel.

The second row is a bench that’s better for two people than three, which of course could be said of any bench seat. There’s enough hip room for wide bodies, although the seat bottoms are a bit thin. There’s a good 37.4 inches of leg room, enough for 6-footer.

Behind the seats, there’s 15.1 cubic feet of cargo space, which expands when the rear seats are folded.

We haven’t tested the base 5.0-inch display on the Insight yet. But Honda’s higher-grade infotainment system is simple and straightforward, with intuitive menus and a few  customizable features. It does its job as well as the flash systems that are out there.

A bar across the top of the 8.0-inch touchscreen shows the common tabs: phone, source, time, and what’s playing. The hard buttons along the side offer quick keys to the home screen, brightness, track selection, volume control, and a back button. When connected, Apple CarPlay and Android Auto run smoothly with little lag.

The Insight isn’t exactly loud inside, but neither is it silent. Sometimes the drone of the powertrain creeps into the cabin.

The 1.5-liter inline-4 makes 107 hp, and a 129-hp electric motor boosts the output to 151 hp combined. The system, which Honda calls a “two-motor hybrid,” is unique to the Insight. It doesn’t need or use a conventional transmission. Most of the time, the engine powers a generator that feeds the battery, which spins the electric motor that drives the front wheels. The engine drives the front wheels in only a few situations.

In other words, the engine doesn’t drive the car, it drives the electric motor that drives the car.

The result is a noticeable disconnect between the driver’s throttle foot and what’s happening under the hood. Sometimes the engine is scrambling to power the generator at low speeds, while other times it’s nearly silent at higher speeds.

At all times, the Insight takes its time to get there, from 0 to 60 mph in about nine seconds. Climbing hills or merging onto the freeway takes a bit of thinking ahead. Honda has a relatively heavy “kickdown switch,” with about 25 percent of the throttle on the far side of a resistant detent that seems awkward.

The suspension is well-tuned and compliant. The front struts and a rear multi-links do a good job of tempering the bumps on bad roads.

The Insight is equipped with EV, Sport, and Econ modes. Sport mode makes the throttle peppier and the engine rev higher (and the cabin louder), but it doesn’t make the car go much faster. Econ mode relaxes the throttle response, but during our testing it didn’t seem to move the car into all-electric mode any more than normal.

We found that the best mode is never-mind mode: start the car up and drive it.

The 2020 Honda Insight is a remarkable value. For less than $24,000 you get 52 mpg and impeccable safety, plus good looks, good cabin space, acceptable acceleration, a smooth ride, and reasonable handling. Better seats and infotainment will cost more, but you’ll still be ahead of the game.