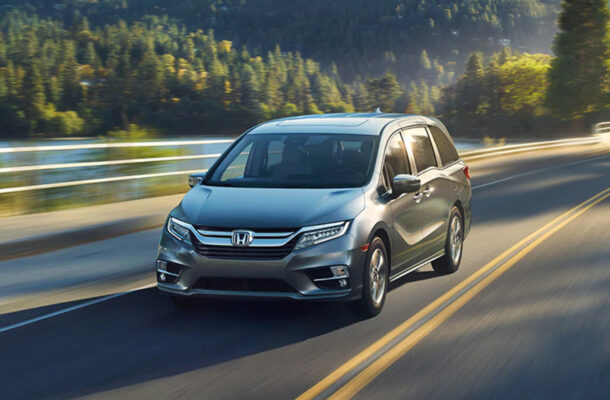 For 2020, Honda makes a 10-speed automatic standard on the minivan.

The front-wheel-drive Odyssey is powered by a 3.5-liter V-6 that makes 280 horsepower. It seats up to eight adults, with more than 32 cubic feet of room in three rows. The third row folds to create a massive 88.6 cubic feet. The EPA rates it at 19 mpg city, 28 highway, 22 combined. Its cabin materials are soft to the touch but still durable.

The ride is sublime. The top two models,Touring and Elite, have so much comfort and so many features that they’re often used as swank corporate shuttles.

The base LX model doesn’t get automatic emergency braking, but the other models do, along with adaptive cruise control, blind-spot monitors, and automatic high beams. Honda says that the LX only accounts for 5 percent of Odyssey sales.

The NHTSA gives the Odyssey five stars for crashworthiness. The IIHS gave it a Top Safety Pick last year, for the Touring and Elite models with headlights they called “Acceptable.”

For a minivan, the Odyssey is stylish, and always has been. It’s helped to change the image of so-called mommy-vans.

The styling was updated in 2018. But even before that, the Odyssey made waves with a hidden sliding door track, and a kickdown toward the rear of the body that broke up the slab sides inherent to vans. The sculpted doors in the 2020 Odyssey continues to break up the acreage of sheet metal.

Infotainment is the thing in the Odyssey, especially in the higher models. The 8.0-inch touchscreen on all but the base model includes Apple CarPlay and Android Auto smartphone compatibility. The rear-seat entertainment is sweet, but maybe outdated in the world of iPads. Like those iPads, the rear-seat 10.2-inch screen is internet connected and can stream PBS Kids and Spotify.

The EX-L with navigation and rear-seat entertainment also offers an in-car PA system that uses the Bluetooth microphone to transmit the driver’s voice into the third row via the speakers. Parents will love it, kids might not.

The Touring and Elite models add an in-car camera to keep an eye on the kids too. It displays a 180-degree view of the cabin that can zoom in; in the dark, it can even switch to infrared. The Elite bathes the interior in ambient blue LED lights at night.

The downside might be using those in-car cameras and talk-back systems from smartphone software. The functions are only accessible from the Odyssey’s native infotainment screen, which requires drivers—or better still, front-seat passengers—to back out of the map or music apps to use the features.

The front seats are comfortable for road trips. The second-row seats are thick and comfortable enough for adults for long periods. Even the third row works for adults. It’s easily accessible thanks to that movable second row, and there’s about 38 inches of leg room in the wayback, which is comparable to many mid-size sedans.

The second row doesn’t fold flat into the floor like the Chrysler Pacifica’s, but the configurable seating option, which Honda calls Magic Slide, allows the seats to be moved forward or back to make room for either passengers or cargo.

With all three rows in place, there’s 33 cubic feet for cargo; with the third row folded, there’s 88.6 cubic feet; and by removing the 70-pound seats in the second row, Odyssey owners can create 144.9 cubic feet of space, as much as a cargo van.

The front-wheel-drive Odyssey’s 3.5-liter V-6 makes 280 horsepower; it’s always been smooth, but it keeps getting better. The standard 10-speed automatic transmission is smoother than the old 9-speed; the 10-speed previously came in the higher trims, but has now worked its way into every Odyssey.

The ride is sublime. The Odyssey shuttles around without straining. It steers well and tracks down the road without much effort. The steering is fairly light, to give minivan drivers what they want.

The Odyssey tops the very slim field of 8-seat passenger vans. Its 22 mpg might not pinch pennies, but that mileage is about the same as others. The powertrain and ride cannot be faulted. The comfort, convenience and cargo capacity are over the top.