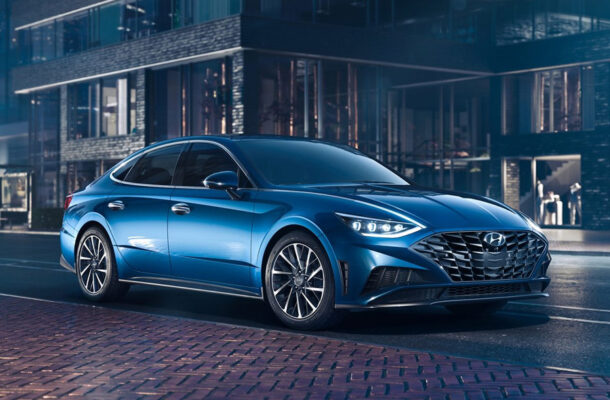 The redesigned 2020 Hyundai Sonata brings poise, power, and plushness to its quest to become one of America’s best-selling family sedans.

The 2020 Sonata gets new styling and a more luxurious interior, while engines remain familiar from the previous version. The base engine is a 2.5-liter inline-4 that makes its 191 horsepower. Carried over from the old Sonata, it has been updated extensively for the new generation. It’s paired to an 8-speed automatic.

Buyers also have the option to upgrade to a 1.6-liter turbo-4. The addition of a turbo doesn’t overcome the smaller displacement; rated horsepower is actually less than that of the base engine. The 180 horses churned out from this turbo-4 won’t impress much on paper, but its 191 lb-ft of torque is all available before 2,000 rpm. This engine also sends its power through an 8-speed automatic transmission.

A third option is a hybrid model, which pairs a 150-horsepower gas inline-4 with an electric motor; combined output is 192 horsepower. There are two flavors of the hybrid: the standard and the Blue. The standard hybrid gets 45 mpg city, 51 highway, 47 combined, while the efficiency-focused Blue is rated at 50/54/52 mpg. That’s the highest EPA highway rating of any sedan.

With the industry-wide push for active-safety features, it’s no surprise the Sonata comes standard with a full set of driver assists. These include automatic emergency braking, adaptive cruise control, active lane control, and a driver-attention monitor.

The Sonata achieves a five-star overall rating from NHTSA. It’s also been named an IIHS Top Safety Pick due to earning the top “Good” score across the full battery of the Institute’s crashworthiness tests.

All prices include $955 in destination charges.

The Hyundai Sonata starts at $24,555 for the base SE. It has cloth upholstery, 16-inch wheels, LED headlights, and an 8.0-inch touchscreen system with Apple CarPlay and Android Auto compatibility.

Step up to the $26,655 SEL and you get synthetic leather upholstery, a power driver seat, heated front seats, keyless ignition, automatic climate control, and satellite radio.

For $28,605, the SEL Plus adds a 12.3-inch digital gauge cluster, wireless charging, the 1.6-liter turbo engine, suede and synthetic leather upholstery, and a digital key feature that allows owners to use their smartphone as a key.

The $34,455 Limited is the most opulent model. It boasts a 10.25-inch touchscreen with navigation, a power passenger seat, cooled front seats, paddle shifters, parking sensors, a head-up display, and an autonomous parking feature.

Hyundai breaks new styling ground with the 2020 Sonata. That ethos is most apparent from the front, where slimmer headlights, a quartet of hood strakes, and a dramatically sloped nose give it a look that shares little with the outgoing model.

Running closely parallel to the outermost hood strakes are what look like another set of strakes, but each is in fact a narrow band of LEDs that stretch from the bottom inner edge of the headlight. At night, the leading half of these bands light up, giving the Sonata a unique appearance. The remainder of this trim continues along the beltline before reaching around and outlining the side glass area.

The rear of the Sonata emphasizes width over anything else, with a wide lower bumper and full-width lighting doing their part in this regard. The lettering along the lower edge of the trunklid spelling out the Sonata name is a classy touch for a mid-size sedan.

Much thought was put into the usability of the Sonata’s interior design, because the logical and ergonomic design stands out. Touchscreen infotainment is provided via either an 8.0-inch screen on an available 10.25-inch one. The larger screen gets navigation and a few other goodies, but even the base setup works well and is easy to learn. Graphics are sharp and the system’s response to haptic inputs is acceptingly quick.

Seats are comfortable and supportive, whether they are appointed in cloth upholstery or the quilted leather used in Limited-trimmed models. The driver’s seat provides great sightlines in all directions, though the standard blind-spot monitors are a welcome second set of eyes.

Despite the fastback-esque roofline, rear-seat passengers enjoy plenty of leg and headroom. Hyundai managed this by lowering the rear cushion and thinning it slightly. They’ve done a deft job at this, as the alterations have resulted in no discernible sacrifice in rear-seat comfort.

Trunk space is generous for a modern mid-size sedan, at 16.0 cubic feet. Split-folding seats are standard and expand the cargo room for those times you need to haul bigger, bulkier items.

The Sonata puts its emphasis on a smooth ride, not on sporty handling.

The ride is comfortable enough over smooth road surfaces, but start traversing some nastier pavement and things can get busy quickly, especially on the larger 18-inch wheels. Minimal body roll and heavy damping provide a soft and stable ride in most circumstances. The steering is precise but possibly too light.

Neither the base 2.5-liter inline-4 nor the 1.6-liter turbo-4 spark much enthusiasm. The power output of both engines is within spitting distance—there’s only 11 horsepower and 15 lb-ft of torque separating the two. The turbo-4 enjoys a much flatter torque curve, however, so it feels the more responsive of the two. But neither option will ever compete with the available V-6 found in the Toyota Camry or the 2.0-liter turbo-4 that can be had with the Honda Accord.

The Hybrid model, however, will hold its own on account of its fuel efficiency. Depending on trim, combined gas mileage for this engine is either 47 or 52 mpg. That’s nearly as good as the Toyota Prius and far better than any other gas-powered car still sporting a trunk.

With any powertrain, the Sonata hushes road and engine noise to a surprising degree. Luxury-car levels of quiet abound in this affordable mid-size four-door.

The 2020 Hyundai Sonata doesn’t break any new ground on the performance front, but buyers looking for smart styling and abundant features at an unbeatable value will want to give this sedan a look-over. We’re partial to the SEL Plus trim.