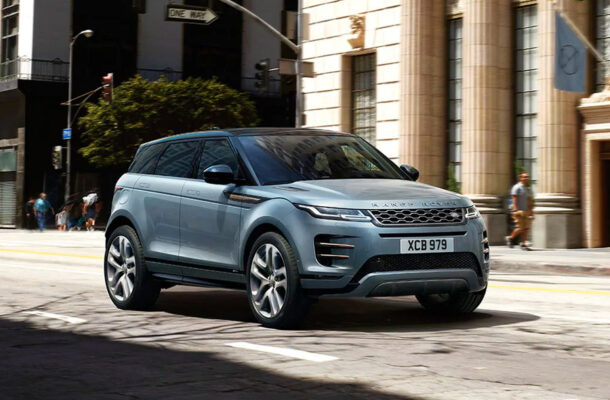 The 2020 Evoque is the most affordable Land Rover Range Rover, but is just as fashionable and couture as its ritzier showroom mates. It’s no surprise it’s the best-selling of the various Range Rover models.

This high-style compact luxury crossover has been completely overhauled for 2020, but it’s hard to tell at first glance. The styling of the previous generation has been refined rather than totally redesigned. The coupe and convertible have not returned, the new model limited to a single five-door body style.

The chassis has been improved for better noise suppression and road manners, and the interior has been enriched with better materials and more technology.

The corporate 2.0-liter turbo-4 now presides under the hood. In most models it makes 246-horsepower, but some trims can be had in a high-output trim that makes 296 horsepower. The more powerful variant also incorporates 48-volt mild-hybrid design in a quest for better fuel economy.

The added tech on the more powerful engine doesn’t really translate to better EPA scores, as both versions of the turbo-4 share the same 23-mpg combined rating. City and highway cycles differ only slightly between the two engines: the 246-hp engine is rated 20 mpg city and 27 mpg highway while the 296-hp engine is rated at 21/26 mpg city/highway.

Both engines use a 9-speed automatic transmission and a new all-wheel-drive system that can disconnect the rear axle in an effort to save fuel.

The latest Evoque hasn’t been crash-tested yet.

The lineup begins with the Evoque S ($43,645). Standard exterior features include LED lighting, 18-inch wheels, and power-folding mirrors. On the inside there’s dual-zone climate control, a single 10-inch touchscreen for infotainment duties, a wi-fi hotspot, leather upholstery, and 10-way power seats. Apple CarPlay and Android Auto are standard as well.

An R-Dynamic SE ($52,145) follows the formula of the R-Dynamic S: mixing in the mild-hybrid engine and sporty accents with the standard equipment of the regular SE.

For 2020 only, the First Edition ($57,845) will be available. Celebrating the debut of the second-gen Evoque, it comes with the base engine but otherwise has all the HSE features along with a panoramic roof, heated steering wheel, and a head-up display.

Land Rover has always been about continuity over reinvention, and the Evoque is no exception. Park the old and new Evoques next to each other and even seasoned fans will be squinting to see the differences.

What they’ll eventually find are subtle updates to what was already a stylish look. Edges have been smoothed and streamlined and some awkward details have been revised or eliminated. The front and rear fascias steal some cues from the larger Range Rover models and are none the worse for it. Overall, the conservative look comes off as a slick piece of work.

The previous generation had been chided by some for not being luxurious enough, and it’s clear that the brand took those complaints to heart. The revised cabin sports excellent fit and finish, high-quality materials, and a classy interior that’s elegant by virtue of restraint.

Leather seats are standard, but more interesting materials populate the options sheet. Our favorite is a woven cloth that’s comfortable, unique, and attractive. There’s also eucalyptus-based materials available for environmentally-conscious buyers. All seating options are somewhat on the tight side, however. Those of larger builds might find them confining.

The back seat isn’t much better. The steeply raked roofline that gives the Evoque its curbside presence doesn’t come without sacrifice, and first to go was the rear head room. Taller riders might find their heads grazing the headliner, especially in models with the optional panoramic roof.

Cargo space for the Evoque stands at 21.5 cubic feet behind the back seat. Fold it down and 50.2 cubes become available.

It sounds confusing, but in practice the two work well with each other. The learning curve isn’t very steep and first-time users shouldn’t have an issue navigating the dual-screen setup. For those who’d prefer their phone software, Apple CarPlay and Android Auto are standard.

As slick as it looked, the old Evoque wasn’t the most refined crossover on the market. It particularly struggled with NVH issues, which at this price point was a significant grievance.

Thankfully, the new model rectifies that in a big way. The new base engine is appropriately muffled and nowhere near as rough. It marks a significant step forward, and owners will enjoy the newfound sophistication.

Out on the road, all these mitigation efforts to smooth out the Evoque’s bad habits are quickly noticeable to anyone who spent time in a last-gen model. The 2020 rides quietly, is more composed, and even on 20-inch wheels isn’t perturbed by road imperfections.

The base engine has 269 lb-ft of torque to go along with its 246 horses, and that’s enough low-end torque to make the Evoque always feel punchy from a stop. It never feels wanting for power, and though we haven’t driven the mild-hybrid engine yet, we think the standard engine should be plenty for most buyers.

Off-road, the Evoque lives up to its Land Rover namesake. There’s multiple off-road modes that tweak the all-wheel-drive and transmission programming for various conditions. A maximum fording depth of nearly two feet should get this crossover to even the remotest of luxury cabins. Hill-descent and hill-hold controls keep the Evoque from getting loose on drivers navigating steep grades.

The old version had its fair share of vices, but the 2020 Range Rover Evoque makes big amends. It’s much quieter, better looking, and more luxurious inside and out. Our favorite is the SE due to its plentiful features and sub-$50,000 price tag.