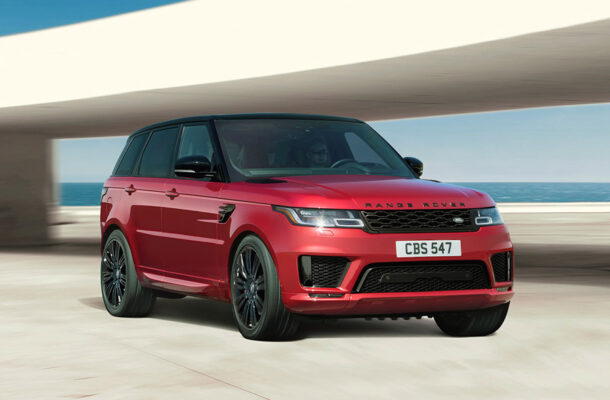 The 2020 Land Rover Range Rover Sport brims with extravagance. Between its performance, opulence, and sheer presence, there’s not much that this luxury SUV leaves off the menu.

Land Rover honed its Range Rover formula decades ago, so changes to styling and creature comforts are scant for 2020. The big news is in the powertrain department, where a new plug-in hybrid and a pair of mild-hybrid inline-6 engines have joined the roster.

The new engines lengthen an already-long list of powertrain choices. The standard 3.0-liter inline-6 will likely be the most common engine and is available in both 355- and 395-hppower iterations. A 518-hp supercharged V-8 fills the engine bay of the pricier models, while the top-spec SVR gets an exclusive high-output version making 575 hp.

The diesel and hybrid aren’t found standard on any trim but are available for extra charge in the middle of the Range Rover Sport lineup. The turbodiesel is a 3.0-liter V-6 that makes 254 hp and 443 lb-ft of torque. The 398-hp hybrid pairs two electric motors with a 2.0-liter inline-4; its 472 lb-ft of torque bests every other engine here save the SVR’s V-8.

Fuel economy for much of the range remains TBD, but we do know that the V-8 is rated for 17 mpg city, 22 highway, 19 combined. Expect only 15/20/16 mpg from the high-output SVR V-8. The EPA rates the turbodiesel at 22/28/24 mpg, making it the thriftiest choice until the new plug-in hybrid and inline-6s are rated.

All engines are paired to an 8-speed automatic and come with all-wheel drive and an electronic air suspension.

Just as diverse as the powertrain choices are the available trim levels. It’s a long climb up to the priciest SVR, and the journey requires passing over the SE, HSE, HST, and Autobiography trims. Pricing begins at about $70,000 for an SE and can more than double for a loaded SVR.

The government and IIHS haven’t crash-tested the Range Rover Sport.

All prices include a $1,295 destination charge.

The SE ($69,945) is the most basic Range Rover Sport and is powered by the 355-hp 3.0-liter inline-6. Standard features include leather upholstery, 14-way power front seats, eight-speaker audio, keyless entry, and 19-inch wheels. The turbodiesel is optional.

HSE models ($75,545) use the same engine as the SE. Additional standard equipment includes Windsor leather, a panoramic roof, and 16-way heated front seats. An 11-speaker audio is standard unless the optional hybrid engine is ordered, in which case a 19-speaker system is installed. The turbodiesel is again optional.

Autobiography Dynamic ($90,285) is the only trim that the plug-in hybrid comes standard, though the HSE’s V-8 is optional. Besides the engine, there’s 22-way seats with heating and cooling functionality, semi-aniline leather upholstery, tri-zone climate control, and a heated steering wheel.

At the top of the lineup is the SVR ($115,795). This model is powered by the high-output 575-hp V-8 and gets a host of performance gear to handle its prodigious power. SVT branding and other special touches abound.

The elegant Range Rover Sport can’t claim direct lineage to the original, but it wears the angular look of its kin, especially in silhouette as well as in profile view. The front and rear ends look similar enough to the bigger Range Rover that most bystanders will likely think you’ve bought the pricier SUV.

In reality, the Sport is smaller and wears a more rakish roofline, the latter being its most definitive trait. The wide stance, big wheels, and some well-placed air ducts further differentiate the Sport from the flagship Range Rover.

With a $70,000 base price, it’s no surprise that the Sport’s interior is a study in opulence. Base models are impressive enough; top trims are utterly indulgent. Nowhere did designers resort to cheap fakery or excessive plastic or simulated materials. Wood, metal, and leather are the three primary ingredients baked into this interior. The end result is screwed together with a craftsman’s eye for fit and finish.

The party piece here is the 10-inch touchscreen infotainment system that bundles navigation, Bluetooth, HD radio, and a wi-fi hotspot. Android Auto and Apple CarPlay compatibility is also standard. Below this screen is a second touchscreen that controls the standard dual-zone climate control.

Fourteen-way front seats are standard on the SE, but most models get heated seats with 16-way adjustment. Twenty-two-way seats that are also cooled come on the Autobiography and SVR. All seats are upholstered in leather (either grained, Windsor, or semi-aniline) and provide excellent support and all-day comfort.

The second row isn’t lacking for comfort either, offering up to 37 inches of leg room. Rear outboard seats that can be heated and cooled. Deep sculpting in the back bench seat suggests that this five-passenger SUV much prefers to be a four-seater.

A optional third-row seat costs $2,040 and is available across the lineup, but we think it’s a lot of money for two highly compromised extra seats. If you need a third row that is actually usable by full-grown adults, Land Rover also offers the larger, pricier Range Rover and the cheaper but more spacious Discovery.

Behind the second row, there’s 27.5 cubic feet of cargo room. This expands to nearly 60 cubes with the rear seats folded.

With half a dozen powertrains on hand, it’s expected that every flavor of the Range Rover Sport drives a little differently than the others. But the baseline level of excellence that underscores the entire range remains surprisingly impressive.

We haven’t yet driven the new mild-hybrid 3.0-liter inline-6 that powers the base models, but we know it makes 355 or 395 hp depending on trim and a 0-60 mph time as fast as 5.9 seconds. It uses a 48-volt electrical system and a small hybrid battery for better gas mileage, but we won’t know how much of an improvement it represents over the outgoing engine until the EPA issues its fuel economy ratings.

We have had a chance to sample the equally-new 2.0-liter plug-in hybrid. Initial impressions are positive: the powertrain is quiet, refined, and accelerates briskly. A large 23-kw battery pack is enough to provide for over 30 miles of electric-only driving, so this should be the economy champion of the powertrain options.

Living up to the Sport moniker is the 5.0-liter supercharged V-8. This engine is flat-out fast, and its 518 hp will carry this SUV to 60 mph in just under five seconds. The exhaust note hints at the power, but doesn’t shout about it. It is subtle and satisfying and a great daily driver for the well-heeled speed demon.

SVR-spec V-8s turn up the wick, making 575 hp and capable of consistent 4.3-second 0-60 mph runs. They sound mean, brash, all grunt and attitude and no restraint. It’s the muscle car of the lineup.

All Sports come with an electronic air suspension, so the ride is apropos for an expensive luxury vehicle. The air ride mitigates all impact harshness without ever being floaty. It can also lower the SUV for easier loading or raise it up for certain off-roading conditions. Ground clearance in its highest setting is 9.3 inches, while total wheel travel is more than 10 inches and maximum fording depth is 33.5 inches. Translation: a skilled driver can pilot this SUV nearly anywhere.

The 2020 Land Rover Range Rover Sport is a go-anywhere, do-anything machine dressed up in the most opulent of duds. With so much choice here, it’s tough to narrow down a favorite, but if pressed we’d likely point to the HSE Dynamic. The standard-equipment V-8 power nicely aligns with the philosophical aspirations of the Sport and its long list of included luxury features won’t leave anyone wanting for more.