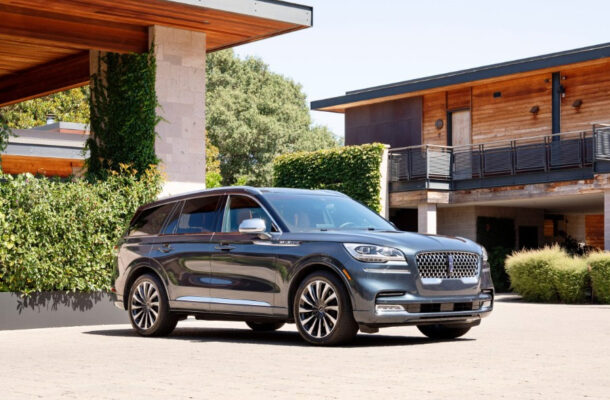 The 2020 Lincoln Aviator is a large, three-passenger crossover that wears styling that’s more artful than trendy, and it boasts an interior to match. It’s arguably one of the best products the brand has produced in decades.

The new Aviator is based on the also-new 2020 Ford Explorer, though from a glance you wouldn’t guess it. The Aviator differentiates itself with heaps of sound deadening, exclusive engines, and a far more upscale style inside and out.

To prove they aren’t playing around, Lincoln engineers have given the Aviator a 400-horsepower twin-turbo V-6 as standard equipment. This engine pairs with a 10-speed automatic and will send power to the rear wheels, though all-wheel drive is available.

In keeping with the times, a plug-in hybrid variant is also available. This version uses the same V-6 as the standard model but adds an electric motor and a battery pack. Power jumps to 494 horsepower and 630 lb-ft of torque, numbers which rival many performance vehicles. Stay light on the throttle, though, and there’s up to 21 miles of electric range.

Once the all-electric range runs out, drivers can expect the plug-in Aviator to return 56 MPGe and 26 mpg combined. Sticking with the base engine nets official EPA figures of 18 mpg city, 26 highway, 21 combined. Adding all-wheel drive to that setup drops ratings to 17/24/20 mpg.

All prices reflect rear-drive models and all applicable destination charges.

The $69,895 Aviator Grand Touring gets the hybrid powertrain, a panoramic roof, adaptive steering, and all-wheel drive, but is otherwise similarly equipped as the Reserve.

The top-flight Aviator is the $78,780 Black Label. It boasts 22-inch wheels and an exclusive interior with three unique interior themes to choose from. The $88,895 Aviator Black Label Grand Touring is a hybridized version of the regular Black Label and rides on 21-inch wheels rather than 22s.

Lincoln’s new design language is best captured in the Aviator. The new look for the brand is slick, forgoing odd angles and creases for something more timeless. It could be said there’s a lot of Range Rover in the Aviator’s style, but the comparison is more regarding the overall theme rather than copied details. Like the famed British SUV, there’s something timeless about the Aviator’s effortless, elegant look.

The details of the Aviator are all Lincoln, though, such as the full-width taillights that echo the Navigator and the mesh grille up front. Slim body sides and well-defined wheel arches give the side profile a distinctive and purposeful appearance.

The choicest bit of the Aviator is the interior, which is attractive in its design and replete in quality materials. Metal, wood, chrome, and leather are aplenty and there’s little in the way of cheap plastic. Even base models have regal interiors.

Every Aviator gets a 10.1-inch touchscreen to handle infotainment duties. The operating system is a good one and should prove easy to learn and use. Apple CarPlay and Android Auto compatibility is standard, as is navigation and Bluetooth. Voice control is included as well, though the steering-wheel-mounted button to cue it up is prone to being accidentally pressed mid-corner.

Front seats are adjustable at least 10 ways, and there’s even 30-way seats available. They’ll coddle any height and build, but it can take time to find the exact right position. It’s a good thing those chairs come with memory functionality.

Sitting in the back seat is just as sumptuous, with 40 inches of leg room and standard captain’s chairs on all but the base model. These seats can be heated and even cooled once optioned up appropriately. A mini-console lodges between the two captain’s chairs and provides USB power and some limited storage.

A third row is available, but isn’t quite suitable for full-sized adults thanks to just 29 inches of leg room and a low seating position that feels like crouching. To seat more than five adults in comfort requires upgrading to the Navigator.

The 2020 Aviator has a ride that is luxuriously smooth, with nary a bump or imperfection finding its way into the cabin. A four-corner air suspension with adaptive dampers is available and heightens the driving experience with its impeccable ride and improved handling.

The base engine is a 3.0-liter, twin-turbo V-6 making 400 horsepower and 415 lb-ft of torque. This offers far more power right out of the gate than any of the competition, and provides plenty of thrust for any maneuvers. The only unfortunate side effect from all this power is fuel economy, which is merely average for the segment.

Perhaps Lincoln recognized this, for there’s also a plug-in hybrid model available. The Aviator Grand Touring, as it’s called, adds a battery pack and electric motor to the 3.0-liter V-6 for a total of 494 horsepower and 630 lb-ft of torque. Curb weight shoots over the 5,000-pound mark, but the added power more than compensates for the extra heft. The plug-in Aviator gets 21 miles of all-electric range and a 56 MPGe combined rating.

Both powertrains utilize a 10-speed automatic that shifts without fuss and doesn’t get confused trying to pick gears, but shift quality on the hybrid is noticeably inferior to the gas-only Aviator. The paddle shifters found behind the steering wheel will probably go both unused and unnoticed.

All-wheel drive comes standard on the plug-in hybrid models but is optional elsewhere. With the all-wheel drive, power gets balanced between the front and back, with the computers determining how much power goes where. There’s no torque vectoring, though.

The 2020 Lincoln Aviator is a bona-fide luxury crossover for seven, though we’d cap the passenger count at four. It is stylish, luxurious, and plenty powerful, though prices climb upwards quickly. We’d stick with a base model, as it offers an excellent value for the money.