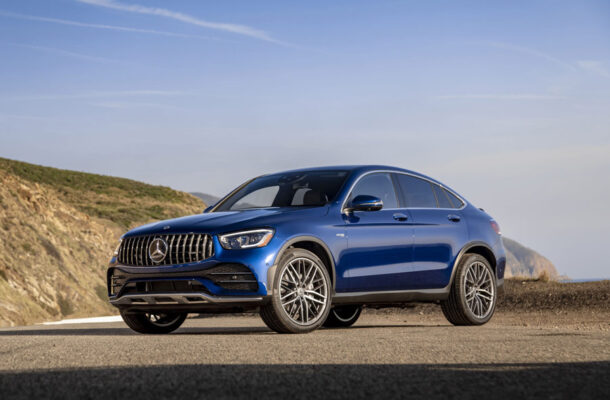 The 2020 Mercedes-Benz GLC is a mid-size crossover that comes as a “coupe” with a low roofline and hatchback glass, or with the usual SUV-like shape with a tall roof and more usable cargo space. For 2020 it gets revised styling, a slightly more powerful base engine, and the latest Mercedes infotainment system. The exterior changes include a new grille, headlights, taillights, and bumpers.

The base engine in the GLC 300 is a turbo-4 making 255 horsepower, up 14 hp from last year. It’s mated to a 9-speed automatic transmission, and comes with either rear-wheel or all-wheel drive.

The high-performance AMG GLC 43 and AMG GLC 63 are all-wheel-drive only, and comes with either a 385-hp twin-turbo V-6 to a 4.0-liter twin-turbo V-8 making either 469 or 503 horsepower in the S version, which is only available as the coupe. The AMG GLC 63 S Coupe offers high horsepower and high fashion: a slinky roofline, dazzling interior, and mind-bending speed. A rare plug-in hybrid also is available.

The 2020 Mercedes GLC hasn’t yet been crash tested, but the 2019 model, with the Advanced Lighting package, was named by the IIHS as a Top Safety Pick+, its highest award.

Automatic emergency braking is standard. Optional safety equipment includes active lane control, blind-spot monitors, a surround-view camera system, adaptive cruise control that can speed up or slow down depending on the speed limit, lane-change assist, and GPS-based speed assistance that can slow the car down for a corner ahead.

When adaptive cruise control and active lane control are piloting the car for a short distance and don’t detect human attention, the GLC will slow itself and stop, which could be life saving in a medical emergency.

Standard equipment in the GLC 300 includes synthetic leather, a 10.3-inch touchscreen for infotainment with Apple CarPlay and Android Auto compatibility, 18-inch wheels, USB-C charge ports, keyless ignition, heated front seats that are power adjustable, and a power liftgate. All-wheel drive costs $2,000, while coupes and AMG models get it as standard.

The 2020 GLC looks more masculine than before, but the new bumpers and grille don’t spoil the curvaceous look of its nose. The three-pointed star is prominent in the new grille.

The cabin is rich, flowing, and comfortable, with sumptuous materials. It’s busy but not overwrought. The lines reach in from the doors down toward a center stack that’s efficient and clean. The new 10.3-inch touchscreen is mounted on the dash, rather than integrated into it, which makes possible a lower instrument panel and better forward vision.

The base synthetic leather is good, but different shades of high-class leather and wood are optional and make the GLC feel warmer than some rivals. The AMG GLC 63 flaunts daring accents in yellow or red, complete with faux carbon panels that look good but seem out of character.

The front seats are palatial while at the same time having relatively thin seat bottoms. They’re still comfortable for all body types in the GLC 300. The AMG GLC 63 has narrower bucket seats that are comfortable for trim people.

The GLC is among the most spacious in its class largely because it’s one of the biggest in its class. It comfortably seats five, with plenty of leg and knee room for tall people; our 6-foot-3 editor was able to sit behind an equally tall person and still have enough leg room. However shoulder room with three in the rear might be an issue, and the so-called “coupe” models have smaller rear doors so entry and exit is compromised.

The GLC has nearly 20 cubic feet of cargo space behind the rear seat and 65 cubic feet with it folded. A power liftgate is standard, and the load floor is wide. The Coupe’s roofline causes the cargo space to be cut to 17.7 and 49.4 cubic feet, respectively. Rearward vision in the crossover is OK, but it’s poor in the Coupe because of the wide roof pillar.

The 2.0-liter turbo-4 in the 2020 GLC makes 255 horsepower. The 9-speed automatic basically shifts well, but not like the exceptional 8-speed automatic made by ZF that’s in some BMWs. There’s some hesitation from the Mercedes 9-speed in finding the correct gear, especially at relaxed speeds, where its indecision can bring out the engine’s coarse nature.

The GLC ride on standard steel springs is compliant, while the optional air suspension with adaptive dampers is creamy.

Rear-wheel drive is standard, but most GLCs (and all of the Coupes) will be all-wheel drive that sends 55 percent of power to the rear wheels, until more or less traction is needed there, then it shifts. The optional air suspension can raise for more ground clearance.

The GLC doesn’t offer a low-range gearbox or locking differential, but it’s not that kind of car. If you want it to be, there’s an off-road package with skid plates and traction-control programs to help in snow or bumpy terrain.

The power is intoxicating. Steady burbles flow from the 4.0-liter twin-turbo engine, and burst with stabs of the throttle. It can accelerate from 0-60 mph in less than 4 seconds, and reach its top speed of 155 mph–174 mph in AMG GLC 63 S!– without effort. No effort because that speed is electronically limited. The engine itself would be happy to go faster.

The 2020 Mercedes-Benz GLC shows a wide range of performance, while it stays true to its luxury badge. The base models carry all the usual tech and luxury gadgets—but if it’s stinging acceleration you need, you’ll want the 4.0-liter twin-turbo V-8 of the AMG GLC 63 AMG.

—By Sam Moses, with driving impressions by The Car Connection