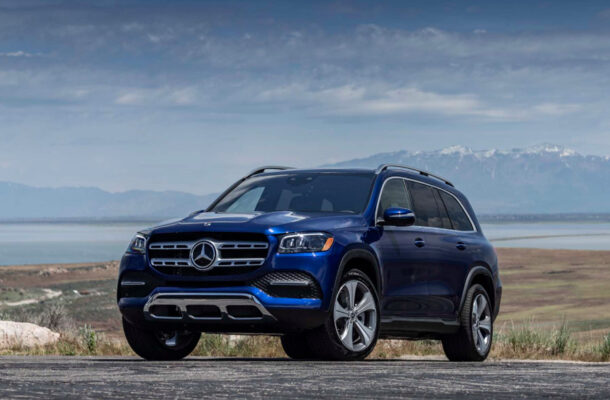 The 2020 Mercedes-Benz GLS, a three-row crossover SUV, is a masterful blend of performance, comfort, and luxury. It’s also huge, at 205 inches long on a 123.4-inch wheelbase. With available second-row captain’s chairs, it makes for a great luxury car for at least four people, and up to seven.

The GLS 450 is powered by a 362-horsepower turbocharged inline-6 paired to a 48-volt electrical system that adds power when the throttle is stabbed. It’s plenty fast, making the much more costly GLS 580 that’s powered by a 483-hp V-8 difficult to justify. It too has the mild-hybrid system, and they both use a 9-speed automatic transmission.

All-wheel drive is standard on both versions. There’s an off-road package that makes the GLS remarkably capable on a trail; it raises the suspension at the tap of a button, among other things.

The standard air suspension provides a supple ride that’s perhaps too soft in standard mode but just right in sport. The 48-volt mild-hybrid system in the GLS 450 uses the car’s active safety gear to read the road ahead and pre-adjust the suspension accordingly. It does a stellar job for both bumps and corners.

It hasn’t been crash-tested by either federal or independent testers and probably won’t be, because of its cost. It comes standard with automatic emergency braking that can detect pedestrians and crossing traffic. Optional safety equipment includes adaptive cruise control, active lane control, and a system that can automatically move the GLS into an open lane of traffic at the tap of the turn signal.

The GLS is well-equipped, but offers many expensive options to deliver even more luxury. There are special leather colors, various types of wood trim, and different headliners.

With the GLS, Mercedes rounds the edges off the basic two-box SUV shape. A big grille digs into the front bumper, and is flanked by headlights that are bigger than a car’s but not gigantic like on some rivals. At the rear, the GLS is simple and clean.

A pair of 12.3-inch touchscreens sit under a single pane of glass; one displays car information and the other handles infotainment. Four square climate control vents sit below, looking glittery and expensive. Wood panels come in a variety of glossy, matte, and open pore finishes.The GLS feels best with a lighter interior; black makes the cabin feel like a cave, even with the standard power moonroof.

Mercedes’ latest infotainment software responds quickly to taps and flicks, with items buried behind icons. The available Burmester audio system surrounds passengers with warm sound fed by radio, satellite radio, or devices connected to one of the many USB-C ports scattered about the cabin.

The heated front seats are supremely comfortable in synthetic leather that can pass for the real thing, although most GLS’ will come with the buttery-soft real leather that may be cooled and massaged.

The seats in the second row are nearly as comfortable, with good room for three adults, separate climate control, and a few USB ports. Optional captain’s chairs delete the middle seat and provide a clear path to the third row.

The third row has enough space for two adults in a pinch and is relatively easy to reach even with a second-row bench. Benz fits USB-C ports back there, too.

The GLS has 17.4 cubic feet of cargo space behind the third row, which is more than the trunk of the S-Class sedan. With the third row folded and the second row slid back for passengers, there’s 43 cubic feet; with it slid forward, that grows to 49 cubic feet, and with it folded, there’s nearly 85 cubic feet, a number that approaches the carrying capacity of a small cargo van. The suspension can be lowered to make loading things in the rear easier.

In the performance department, the 2020 Mercedes-Benz GLS is an overachiever.

The GLS 450 uses a 3.0-liter 362-horsepower twin-turbocharged inline-6, with 369 pound-feet of torque. It’s paired to a 48-volt electric starter generator and battery that can provide an additional 21 hp and 184 lb-ft of torque. The 48-volt system takes away any hint of turbo lag and helps the powertrain compensate for electrical draw from accessories such as the air conditioning system.

The GLS 450 engine is so strong, so silent, and so refined that we can’t see any reason to choose the GLS 580 with its 483-hp, 516 lb-ft of torque 4.0-liter turbocharged V-8, unless maybe you tow regularly. The GLS 580 also benefits from the 48-volt integrated starter generator system’s power boost, and also uses a version of the 9-speed automatic transmission found in the GLS 450. In our initial preview drive, we found transmission programmed to downshift too eagerly. With that much torque, it barely needs to downshift at all, for acceleration.

The GLS’ air suspension can be softened or stiffened by the drive modes. The Comfort mode floats over bumps, while Sport and Sport+ modes provide less give but more control. There’s a useful Individual mode that can mix the Sport suspension setting with the Comfort drivetrain setup, if all you want is a firmer road without the quicker throttle and transmission response.

There is an optional E-Active Body Control system that prepares each wheel for pavement imperfections. The system works fabulously to tame bumpy roads, but we found it to result in unnatural-feeling motions on winding pavement as it attempted to keep the vehicle perfectly flat, without lean in the corners. The standard air suspension is so good, it makes this high-tech optional system seem like over-engineering.

For being a hulking SUV with little steering communication, the GLS actually feels nimble in the city. Out on the highway, it cruises in total relaxation.

The 2020 Mercedes-Benz GLS is an impressive three-row SUV. Its powertrain with its mild-hybrid system is awesome, the standard ride is sublime, the three-row seating is spacious, and the styling is classy.

-by Sam Moses with driving impressions by The Car Connection