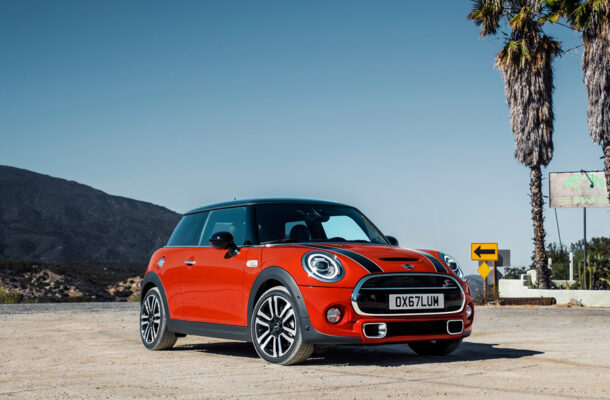 Character abounds in the 2020 Mini Cooper. Available as a 2- or 4-door hardtop, this compact runabout combines the charm of the original with the best of today’s technology and performance.

New standard active safety features and some additional extras on a few trims are the sum of the changes for 2020. With the manual transmission on hiatus, the automatic gearbox has also been made standard. An all-electric version known as the Cooper SE is now available as well. The new equipment and automatic transmission contribute to the $2,000 jump in price over last year.

Base Cooper Hardtops are powered by a 3-cylinder engine that makes 134 horsepower. Cooper S models trade that off for a 189-horsepower turbo-4. The most potent option is the John Cooper Works (JCW), which uses a 228-horse turbo-4. All models are front-drive only.

The JCW comes exclusively with an 8-speed automatic, while the lesser-powered engines get a 7-speed dual-clutch automatic. A 6-speed manual had been standard equipment, and will return for 2021 in a few models.

Every engine, even the base model, is enough to make the Cooper a peppy little pocketful of retro kitsch. The 0-60 mph dash takes 7.4 seconds with the base 3-cylinder or can arrive in 6.0 seconds in JCW models.

The NHTSA has awarded the Mini Cooper 2-door a four-star overall crash test rating. The IIHS gave that bodystyle their highest rating of Good.

All prices include an $850 destination charge.

Since its rebirth over fifteen years ago, the overtly retro Mini Cooper has followed its own styling paradigm that’s largely removed from the latest fads and fashions. The distinctive, boxy shape is a direct homage to the original 1960s Cooper, tastefully imbued with modern touches.

The 2-door wears the vintage look best, with an especially upright greenhouse and big glass area all around. To maximize space the small body has been pulled tight over the diminutive chassis. Two doors or four, the car is pert but inherently practical.

The fascias are fun, with the Union Jack taillights proclaiming the brand’s British heritage and round headlights that mount in raised fenders just like the early models. Most Coopers get a clean front end that sports a wide-mouth grille—also a homage to the past—but JCW models get a flurry of air ducts for a sportier appearance.

The retro theme continues inside. The massive centrally-mounted speedometer was moved to a more conventional location directly ahead of the driver a few years ago, but the round housing has been repurposed for a 6.5-inch rectangular touchscreen. Apple CarPlay is standard but Android Auto remains unavailable.

The infotainment software works well, though the screen is on the small side. The available 8.8-inch unit costs $1,700, adds navigation, and is a welcome upgrade.

Unsurprisingly, space is at a premium in the Mini. Four-door models aren’t great at sitting four people, let alone five. Stick with the 2-door and the back seat feels like even more of a penalty box. Cargo space is limited to 8.7 cubic feet behind the back seat, though that expands to 34 cubic feet with the rear seats folded. That’s on par with many small crossovers.

The Mini Cooper isn’t fast in a straight line—at least, base models aren’t—but there’s not many city vehicles that feel as tossable as this hatchback. It swerves, zips, ducks, and darts with the alacrity of a slot car. There’s a reason the “go-kart” cliche is so overused with the Mini Cooper. There’s not much this side of a Mazda Miata that has such immediate, satisfying handling.

This is true no matter what engine is under the hood. The base 1.5-liter turbocharged 3-cylinder responds well to being wrung out, and once you’ve gathered speed there’s a joyful delight in trying to maintain pace. If you lose it, you’ll need to build up momentum once again.

The Cooper S adds a cylinder and a fair bit more power, with its 2.0-liter turbo-4 dishing out 189 hp and 206 lb-ft of torque. It’s got plenty of zip to satisfy those with a heavy right foot and it doesn’t sacrifice any handling prowess for straight-line speed. Buyers who want a bit of verve under the hood will be happiest with this trim.

The JCW is in genuine hot-hatch territory. A turbo-4 with 228 horsepower and 236 lb-ft of torque delivers 60 mph in just 6 seconds. A revised chassis improves handling. This is the meanest Mini, and despite the high price tag it won’t fail to put a smile on the driver’s face.

The JCW fumbles in regard to ride quality. Other models ride better, especially those on the smaller wheels. Base models get 15-inch wheels that offer the tallest sidewall and the best ride.

Base Coopers with the turbo-3-cylinder gets 28 mpg city, 36 highway, 31 combined. Opting for the Hardtop Cooper S drops those figures only slightly to 26/35/30 mpg. Stepping up to the John Cooper Works drops mileage to a still-decent 26/34/29 mpg.

The 2020 Mini Cooper is a city car with a flair for style and a penchant for cornering. There’s nothing that looks like it and few cars that handle like it. Urbanites who want something small, fun, and practical would do well to give the Mini Cooper a look. We’d get a base Cooper or Cooper S equipped with the Signature sub-trim.